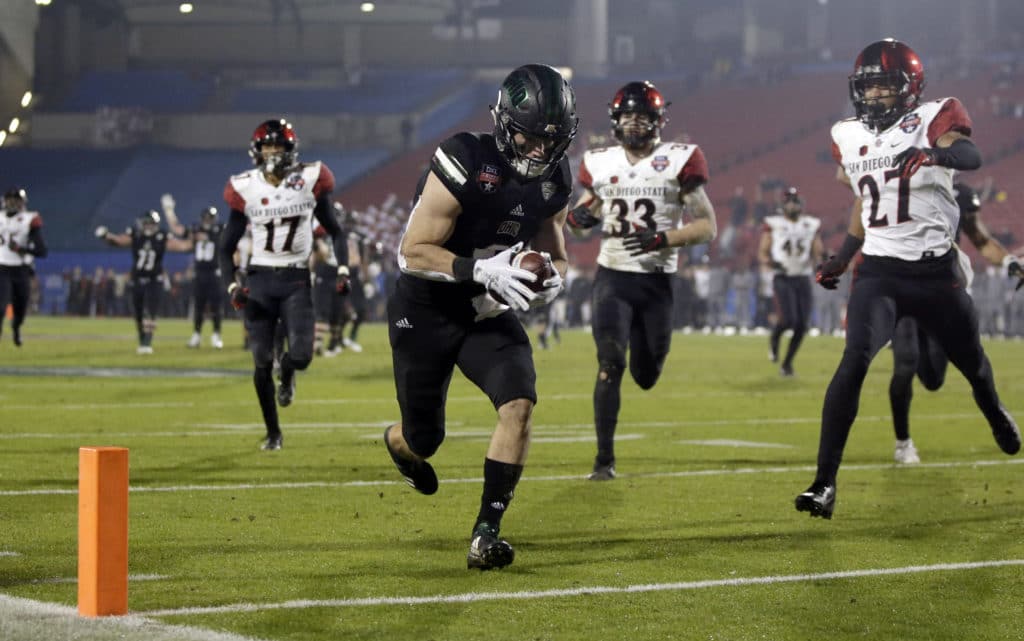 He may be the oldest coach in college football, but Ohio Bobcats head man Frank Solich sure knows how to get a team ready for a bowl game. Plenty of big plays on offense and a well-earned shutout performance by the defense spearheaded Ohio (9-4) to a 27-0 rout of San Diego St. (7-6) in the DXL Frisco Bowl Wednesday.

Quarterback Nathan Rourke may have only completed 10 passes, but he played a hand in all three of the Bobcats’ touchdowns. The first two came in the second quarter in the form of 9 and 11-yard rushing scores respectively. Combined with a first quarter field goal by Louie Zervos, the Bobcats led 17-0 at halftime. Zervos added another field goal in the third, before Ohio iced the game away with a clever trick play early in the fourth. Running back A.J. Ouellette took a handoff and darted up inside before pitching it back to Rourke who calmly threw to a wide-open Andrew Meyer for a 35-yard touchdown.

Rourke finished with 206 yards passing and 44 yards rushing. Ouellette piled up 164 yards rushing and Papi White was the Bobcats leading receiver for the game with 90 yards on 4 receptions. SDSU drove into Bobcats territory multiple times in the fourth quarter, but the Ohio D was able to thwart each drive and preserve the shutout.

Ohio’s win marks the first for the Mid-American Conference this Bowl Season. The Frisco Bowl victory gives the Bobcats wins in 6 of their last 7 games of the campaign. This was also Ohio’s first bowl win in the state of Texas and first bowl game in Texas since the school’s very first bowl appearance in the 1962 Sun Bowl.

San Diego St. mustered very little offensively outside of Juwan Washington’s 129 rushing yards. QB Ryan Agnew only managed 126 yards passing against the tough Ohio defense. This year marked the first time since 2015 that the Aztecs failed to reach 10 wins, but they extended their bowl streak to nine straight seasons.