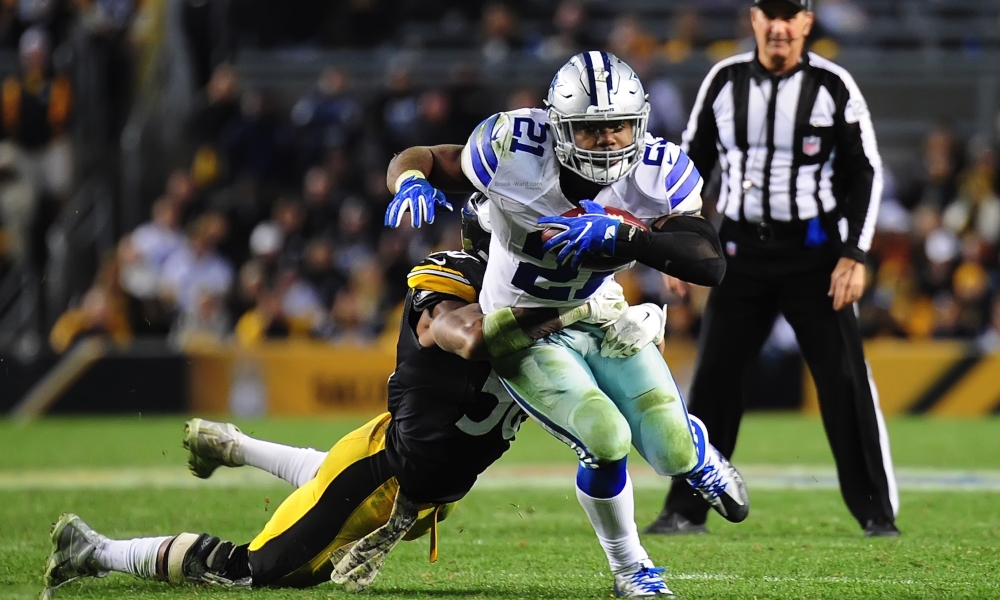 Even though it’s only mid-August, fantasy football season is in a very busy state with drafts. Because of various news reports, injuries, and changing opinions based on players and their situations, the ADP of players has been looking like a rollercoaster at times. When your targeted players’ ADP changes, your draft strategy changes as well. For example, Jeremy Maclin has been one of the high ADP risers, and for good reason. However, Maclin used to be going in the tenth round of mock drafts, and now he’s going in the seventh. This makes it a much tougher decision to take Maclin or not, because of the other options at the same ADP.

Maclin isn’t the only mover, there have been a lot, especially at the running back and receiver positions. It’s definitely frustrating having to take these players earlier than you’re used to, but this makes drafting more complicated and more of a puzzle. The start of the preseason has definitely helped raise the value of players like Kelvin Benjamin, Darren McFadden, and Kenny Golladay. When the values of players changes, you need to reconsider if they are worth taking. That sleeper you drafted in the tenth round doesn’t have the same value in the seventh round. To help you navigate these ADP changes, I will list out the recent moves and include how significant the change in ADP is, the reasoning, and if it is justified.

Ezekiel Elliott, RB, Dallas Cowboys, -12.4
This drop should be pretty self explanatory to fantasy players. With Zeke now suspended for the first six games, and not playing until week eight, this leaves him just ten weeks of football. This is even fewer for fantasy depending on when your leagues’ playoffs start. It’s a lot of value to sink into a high pick, but if you feel confident in your drafting abilities, I recommend taking the chance. Formerly the third overall pick in fantasy, Zeke’s suspension has his ADP in the second round, with ESPN’s software indicating that he is a third round pick. We’ll have to wait through a likely long appeal process to see if the suspension is reduced, but for now, I’m not taking Zeke until the early third round.

Isaiah Crowell, RB, Cleveland Browns, +8
In the last week, Crowell has moved up from round five to round four, a smart move considering similar options. Other running backs going close to his ADP, like Mark Ingram and Christian McCaffrey, are likely to share more touches out of the backfield than Crowell will. Cleveland also has the healthiest and best offensive line, with a coach who loves running the rock. With the additions this team has made, hopefully they won’t be down in games as badly as last season. This all makes for an okay situation with Crowell, who should get 250 carries.

Terrelle Pryor Sr., WR, Washington Redskins, +5.8
After formerly being a fifth round pick, ESPN’s draft software has moved Pryor up to a fourth rounder. The tape of Cousins connecting with Pryor definitely has helped, but Jordan Reed has been the biggest factor. Reed has always been injury-prone, and Coach Jay Gruden is bringing him along slowly this preseason. Because of this, Pryor’s value has risen, as the upside of Pryor playing with a good quarterback is huge. Pryor had over 1,000 yards from a slew of inexperienced, or bad, Cleveland quarterbacks. The sky’s the limit for a pass-friendly offense like Washington.

Jordan Reed, TE, Washington Redskins, -5.7
As he is already injured, Reed’s fantasy value has been dropping in drafts. Aside from the fact that waiting on tight end is a totally feasible plan, the lack of clarity of a return date is scaring away owners. After trying some cuts and getting new cleats in practice, Reed says he feels much better. Coach Jay Gruden wants to bring him along slowly, which is concerning for fantasy owners. Having him start out the season with a minor injury doesn’t help his chances of staying healthy. There are enough weapons in the Washington offense to bring Reed along slowly, so I’m looking elsewhere for my tight end.

Mark Ingram, RB, New Orleans Saints, -14.5
Another member of my do not draft list, Mark Ingram’s ADP has fallen to the sixth round. After watching Alvin Kamara in the preseason, everyone is realizing how big of a committee this will be. It doesn’t seem too crazy for the share of touches to be Ingram 40%, Peterson 40%, and Kamara 20%. A forty percent share in a running back committee is not worth drafting this early. The sixth round is definitely a better value for Ingram, who is still a good running back. The question becomes, do you want a better running back with a lower share of touches, or an okay running back with a higher share of touches, like Paul Perkins or Ameer Abdullah.

Kelvin Benjamin, WR, Carolina Panthers, +11.1
Benjamin’s ADP has shot up for a number of reasons, but his catch in the preseason against Houston is a big one. If Cam Newton can just make the throws that his backup Derek Anderson made, Benjamin could be a good WR2. ESPN’s Mike Clay has also pointed out that Carolina has the easiest schedule for receivers this season, which should help Benjamin easily bully his opposition. All of this makes him a solid flex play this season.

LeGarrette Blount, RB, Philadelphia Eagles, +10.1
Blount has traditionally been a big target in standard scoring formats rather than PPR formats. It seems like now when he is on the field, all opposing defenses think run. The lack of effective runners behind Blount in Philly has made him a runner all over the field. He still won’t be a factor in the passing game, but he won’t be just a goal line rusher either. Considering he has double digit touchdown upside, moving Blount up from round nine to round eight is still is a steal.

Eric Decker, WR, Tennessee Titans, +17.1
A great addition for Tennessee, Decker will really help to solidify this team’s passing attack. Decker is now going as a ninth round pick rather than the eleventh rounder has was going as previously. However, Decker is listed behind Corey Davis on the depth chart for the WR2, with Rishard Matthews as the WR1. Tennessee should run more three wide receiver sets, so hopefully this won’t be an issue.

Jeremy Maclin, WR, Baltimore Ravens, +27.1
The ESPN draft software recently moved Maclin up draft boards, to where he is now ranked as a seventh round pick. This has shot his ADP up dramatically and for good reason. Experts have pretty much agreed that Maclin will likely get Steve Smith’s share of the targets from last season (102 targets). I see him getting 120 targets, and somehow is the best red zone threat the Ravens have. Along with being in the pass-happiest offense in the league, Maclin still has lots of upside even at this lower ADP.

Darren McFadden, RB, Dallas Cowboys, +30
Another self explanatory case, McFadden appears to be the primary beneficiary of Zeke’s suspension. The fact that he’ll be starting six games behind the best offensive line in the game has shot McFadden’s ADP up. Even though an ADP of round ten sounds pretty suiting here, I’ll bet other people in your league will reach for McFadden by the sixth round. Because of how often people will reach for him, I’ll likely hold off on McFadden.

Tyrell Williams, WR, Los Angeles Chargers, +26.9
With reports that first round pick Mike Williams will miss the beginning of the season, and maybe the whole season, Tyrell Williams is back in play for the Chargers. After ranking as the 18th-best receiver in fantasy last year, Williams should produce well as the WR2 in this offense. Williams’ ADP was so low before, but now he is a tenth or eleventh rounder. Even after moving up a couple rounds, Williams still has great value as a strong bench player.

Terrance West, RB, Baltimore Ravens, +13.6
One of my favorite sleepers, Terrance West has been another player whose ADP is rising. With Kenneth Dixon out for the season, Terrance West should be in line for at least 60% of Baltimore’s rushing attempts. Even though Baltimore is the pass-heaviest team in the league and Danny Woodhead is likely in line for 60 receptions, West will still get his share of receptions too. Considering that Baltimore also lost their fullback to free agency, West will have the majority of red zone snaps as well. All of this provides great value for West in the later rounds.

Jordan Matthews, WR, Buffalo Bills, -20.4
I believe that this change in ADP was back when he was still in Philadelphia. Matthews was reported to have lost the slot receiver job to Nelson Agholor, but that’s no problem anymore. Matthews will be used in many different ways in Buffalo. Even though this will still be a run first offense, Matthews’ change in scenery makes him a great sleeper. I like Matthews to catch seventy passes in Buffalo, making him a solid PPR flex or bench option.

Rishard Matthews, WR, Tennessee Titans, -31.4
Even though I had Rishard Matthews on my do not draft list, his ADP has dropped to the point that he’s worth drafting. Fantasy players have thought that Eric Decker and Corey Davis are the starting receivers, which is easy to believe. According to the Tennessee depth chart, Eric Decker and Corey Davis are the WR2, with Rishard Matthews slated as the WR1. Even with this, Tennessee will likely run more three receiver sets on passing downs now that they have more talent at the position. With this steep change in ADP, Matthews is now a much more draftable sleeper.

Five Rookies Who Could Make a Big Fantasy Impact
Running Back Strategy: How to Draft the Most Volatile Position in Fantasy