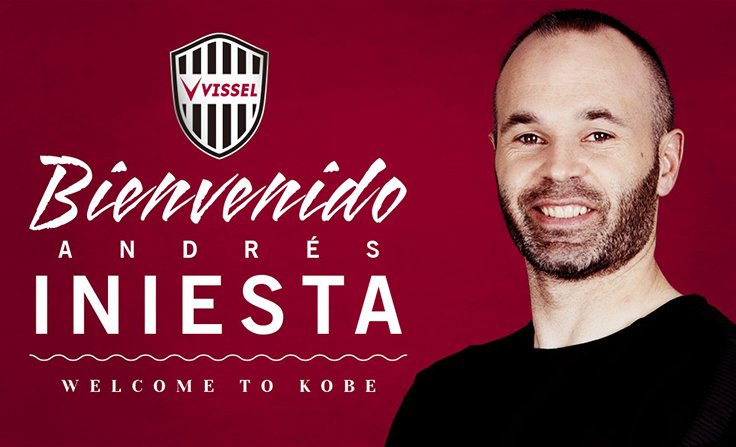 Despite rumors of moving to China, the 34-year-old Spanish midfielder Andres Iniesta signed for Japanese side Vissel Kobe.

With this move set in stone, Iniesta completes his Barcelona chapter despite signing a lifetime contract. During his time with his boyhood club spanning 22 seasons, he won nine league titles, four Champions League trophies and three Club World Cup trophies to name a few. He amassed 674 senior appearances in all competitions.

NHK first announced the deal between the two parties according to The Japan Times. Iniesta himself announced the deal with a picture of himself and Hiroshi Mikitani inside a private jet heading to Japan. His “friend” Mikitani owns Rakuten who is the primary shirt sponsor for Barcelona and Vissel Kobe and the Japanese team itself.

Speaking at a press conference, Mikitani said, “Iniesta’s philosophy, leadership and DNA will be a terrific inspiration, not only for Vissel Kobe but all Japanese football society.”

Iniesta has a deep-rooted interest in Japanese soccer. Apart from being a fan of Captain Tsubasa, Iniesta stated that “[Japan] is a country I love. I respect the football in Japan […] They are really of high quality.”

Iniesta joins the likes of Arsenal fan-favorite Lukas Podolski at the club who currently is in 6th place in the table.

Vissel Kobe was founded in 1966 as Kawasaki Steel Soccer Club.  With the formation of the J. Leauge during the 90s, the team was moved to Kobe and renamed to what it is today. Vissel Kobe has played in the top-flight of Japanese soccer for nine years total, suffering relegation only twice.