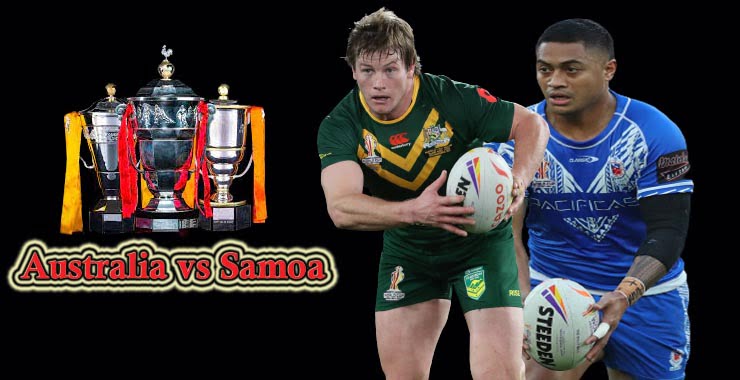 After a month of Incredible drama, defending champions Australia will take on Samoa in the decider, who will be playing the final for the first time in their history. The Aussies booked a spot in the final (their 10th World Cup final) after beating New Zealand in a hard-fought 16-14 semi-final and are looking to do the hat-trick of World Cup titles since they won the 2013 and 2017 editions.

On the other side, their opponent Samoa pulled one of the great upsets in rugby league history in the semi-final, 27-26, to qualify for the final in which captain Junior Paulo and playmaker Jarome Luai led before Stephen Crichton slotted the match-winner. After losing by 60-6 against hosts England in their World Cup opening fixture, Samoa has made a remarkable comeback and is now just one step away from the grand title.

It’s worth mentioning here that Australia has a 100% win record against their opponent and will try to extend this winning streak as both sides have met three times before, with Australia victorious on all those occasions, World Cup quarter-finals in 2000 (66-10) and 2017 (46-0) and the 2014 Four Nations (44-18).

After not winning a single game in the 2017 edition to qualify for the final in the 2022 tournament as the first new nation in the World Cup to qualify for the last since 1988, Samoa will start the game as sentimental favorites in Old Trafford with crowd support on their side as many England bought the tickets for the final believing their team will be there but now will cheer for Samoa.

But their opponent, the Aussies, knows a thing or two about winning the finals as they keep a remarkable World Cup record of being crowned as champions 11 times.

There are many different platforms where you can watch the live game, like Fox League and Kayo, which will start at 3:00 am after the pre-game show, while BBC One, BBC Two, and BBC Three will also stream the live game. The  Rugby League World Cup final between Australia vs Samoa Rugby Live Stream if you’re based in anywhere on OolaTV ($14.99)

Ahead of the final, Mal Meninga looks to be settled on Nathan Cleary at halfback and Harry Grant and Ben Hunt as his hookers which means experienced playmaker Daly Cherry-Evans will miss out on the 17. Reagan Campbell-Gillard has been declared fit to play the final after he received a cork in the semi-final.

On the other hand, their opponent Samoa will be without the services of Fa’amanu Brown. The latter suffered a concussion against England after clashing heads with his teammate Oregon Kaufusi with Chanel Harris-Tavita starting at his position. Another huge boost ahead of the final for first-time finalists is the inclusion of Prop Junior Paulo has been declared fit to play the decider after receiving a caution for a lifting tackle on English player Tom Burgess. Moreover, Connelly Lemuelu has also joined the squad.

On this big stage, some great players will face each other and try to win their duel. Let’s take a look at some expected individual battles:

A battle to watch out for in the final will be between the two of the most talented players who will come face to face for their claim of the grand title. Jarome Luai has been the fundamental behind Samoa’s successes. He has the most try assists (8) in the World Cup, and his pairing with Anthony Milford has played a vital role in the success of Samoa in the World Cup.

Munster, as well as eight, try assists under his name and is one of the game’s greats, will be ready to perform another magical show. Star player is quick on their feet but is faster between the ears and makes their opponent pay if they allow them even the slightest chance to run.

Josh Addo-Carr’s equaled the Kangaroos teammate Valentine Holmes’ record as his trial in the semi-final was the 12th in the mega event. He made that record in the 2017 World Cup and has an overall tally of World Cup 14 and is just two behind of record of Billy Slater’s history of 16 tries.

The Overcast is 9 degrees, and the lowest temperature is expected to be 3 degrees, with the highest expected at ten degrees to reach in the afternoon.