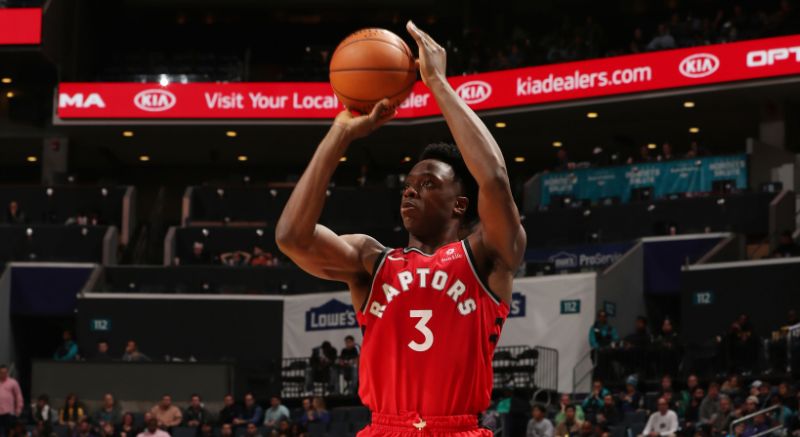 OG Anunoby rises for a shot in an NBA game against the Charlotte Hornets last season. (Photo by Kent Smith via Getty Images)

OG Anunoby and Malachi Richardson have both gotten their 2018 NBA Summer Leagues off to good starts. Unfortunately, their good individual play is yet to translate to a win for the Toronto Raptors. That trend continued Monday. The Raptors dropped their third straight contest to open Summer League play, falling to the Oklahoma City Thunder 92-82. The game only had four lead changes as Oklahoma City was dominant from the opening tip with a 31-point first quarter.

Second-year pro Anunoby continues to add to his pro basketball experience following a rookie year in which he provided some valuable contributions for the Raptors. He scored 19 points, grabbed 6 rebounds, and notched 2 blocks in this contest. Richardson, the former Syracuse guard, was just behind with 16 points, 3 rebounds, and a steal. Giddy Potts, who was a member of the Middle Tennessee squad that shocked Michigan St. in March Madness two years ago, was the other Raptor to reach double figures scoring. He accumulated 15 points in just 15 minutes of action. Codi Miller-McIntyre supplied 8 assists and 4 rebounds to go along with his 8 points.

The Thunder managed to shoot an impressive 52.4% from the field as a team in what was their second Las Vegas Summer League triumph. Even more impressive was their 58.8% shooting from three-point territory. Second-year pros PJ Dozier out of South Carolina and Rashawn Thomas out of Texas A&M Corpus Christi led the charge with 17 points apiece. Dozier added 6 boards, 3 assists, and a steal to his stat line while Thomas snared 12 rebounds to notch a double double. Kevin Hervey and Dakari Johnson were the other Thunder players in double figures, scoring 12 and 10 points respectively.