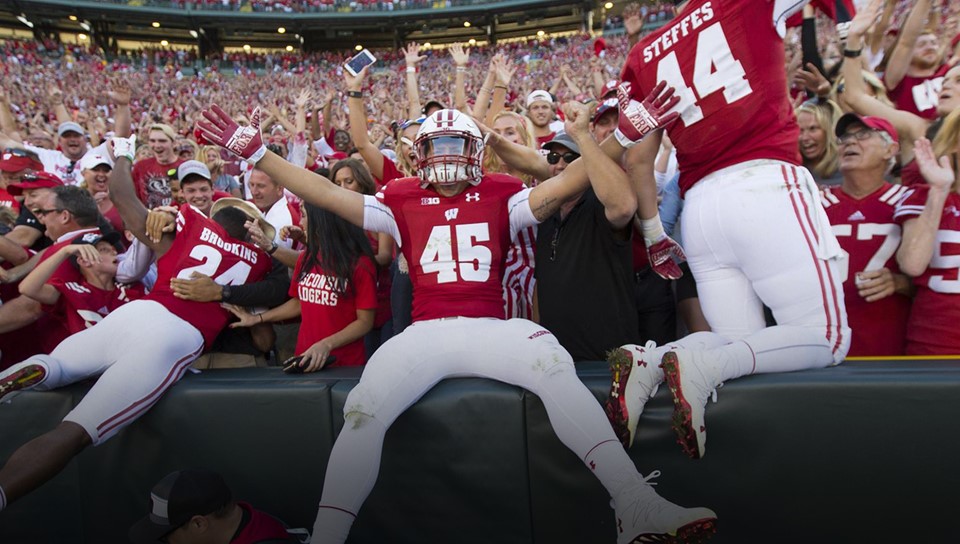 Fullback is becoming a position used less and less in football, but for a run-heavy offensive team in the Wisconsin Badgers, a good fullback is essential. The Badgers do have senior Austin Ramesh, but they also have Green Bay native Alec Ingold. The road to fullback was not an ordinary one for Ingold. He was the starting quarterback for Bay Port High School in 2014, his senior year. He led Bay Port to the Division 1 Semifinal game where they fell to Kimberly. Ingold, a duel-threat quarterback, ran for 178.8 yards per game, on his way to 2,324 rushing yards and 29 touchdowns. He also completed 61.3 percent of his passes, throwing for 1,411 yards and 15 touchdowns. Ingold was named the 2014 Associated Press Wisconsin Player of the Year, First-Team All-State by AP and Wisconsin Football Coaches Association, 2014 Gatorade Wisconsin Player of the Year, and a finalist for Dave Krieg Award for state’s most outstanding senior quarterback. Ingold had everything going for him coming out of high school.

Ingold, originally committed to Northern Illinois as a quarterback, followed Coach Paul Chryst to Wisconsin, but Chryst recruited him as a linebacker. After injuries to multiple running backs, Wisconsin was put in a tough spot. Enter Alec Ingold. Paul Chryst understood the versatility of Ingold and asked him if he would move to fullback, Ingold was all for it. I asked Alec, how tough was the move in-season from linebacker to fullback?  Ingold stated, “Both are tough and physical positions to play. I feel like I have a better overall understanding of the game playing both positions, but the details of fullback have definitely taken a while to try and perfect the best I can.”  Ingold finished his first season at fullback playing 10 games, logging 49 carries for 131 yards and 6 touchdowns.

As the Badgers began to get healthy in the backfield again, many wondered if Chryst would move Ingold back to linebacker, but that was never a question to Chryst as Ingold had taken the fullback position and ran with it. Now a junior, Ingold is seen as an upperclassmen and someone the Badgers can look to. I asked Alec, being a junior now, do you see yourself taking on more of a leadership role?  Ingold followed by saying, “I’ve been trying to be more vocal around the guys but the best way to lead on this team is by example. If people see you consistently doing the right thing they will want to join in.”

Now this leadership role has become even bigger with the loss of starting middle linebacker and senior Jack Cichy. Cichy was entering this season on the Bednarik Award watch list, Nagurski Trophy watch list, and the Lott IMPACT Trophy watch list. When asked about the loss of Cichy, Ingold said, “It’s been tough losing such a big piece to the puzzle, but for as long as I’ve been here, it’s always been next man up. We don’t flinch as a team and Jack (Cichy) will be able to find a role to help this team in new ways.” Losing a player as key as Jack Cichy is never easy, but for a program like Wisconsin, they have always had the mantra “next man up.” With Cichy, the Badgers had lofty expectations coming into the season, being ranked in the preseason top-10, and many analysts believing they would meet Ohio State in the Big Ten Championship game. “Last year everyone saw us as underdogs and we were able to block out the noise and come together as a team and be successful,” Ingold stated. “This year we are doing the exact same thing. People can have their expectations for us but as a team if we aren’t focused on ourselves and getting better every week we won’t be the team we want to be come December.”

For the first time in a while, the Badgers have a team that can contend for not only a Big Ten Championship, but a spot in the top-four, even without Cichy. The Badgers have always seemed to put players in the right position to succeed, with Ingold being an example. Even without the presence of the injured linebacker, look out for the Wisconsin Badgers this season.