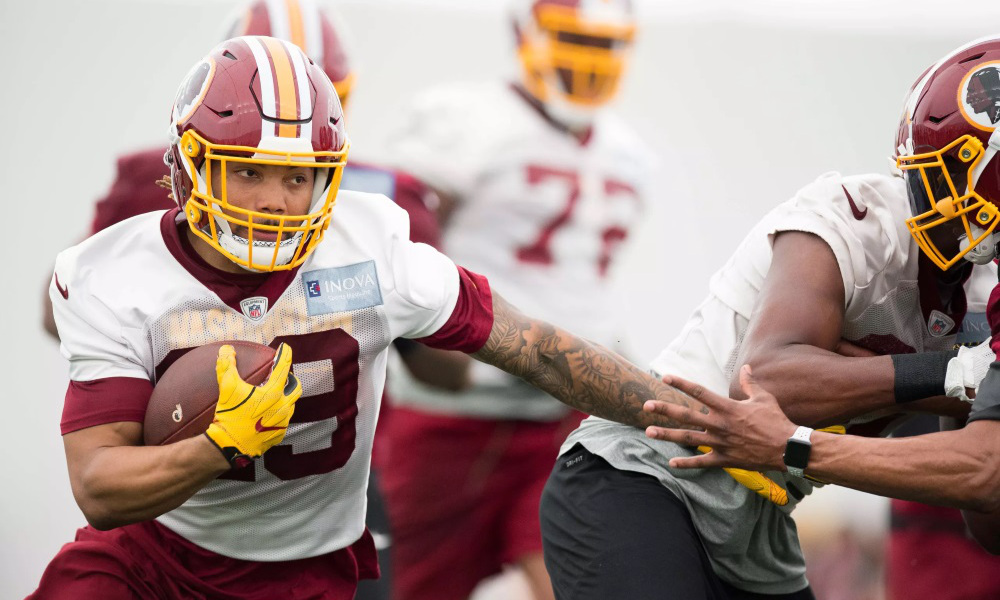 As we approach fantasy football draft season, more and more people are studying up and experimenting with some mock drafts. Since the mock drafts are filled with more serious fantasy owners who are trying to develop a strategy, we are discovering what players’ true fantasy football ADP is.

ADP means Average Draft Position. In this article, I’m giving you five of the players whose ADP have risen to most recently, according to Fantasy Football Calculator. The data is for 10-team PPR leagues, those the pattern can be seen across all types of scoring. This is important information to know heading into your draft, since the players chosen obviously don’t go right along with rankings.

Derrius Guice was going at the end of the fifth round a month ago, but he has risen a full round to 4.06. Guice is so clearly better than Perine and Kelley, while Chris Thompson has his own specific role carved out, so I expect Guice to play as the clear top back during week one. Once he has a couple flashy plays in the preseason, we’ll see another little ADP spike. I think his current draft position is right, and I wouldn’t take him in the third, even if that is where your drafting site has him projected during mid-August.

Rookie Ronald Jones II has seen a big spike, from early eighth round to mid-sixth round in just a month. Technically Peyton Barber is still listed atop the depth chart, but we all know that is BS. Ronald Jones is the clear top dog in the backfield. He has the potential to push for 20 touches in week 1. Without a doubt, Jones’ ADP will continue to rise throughout the preseason. If you do your draft now and get him in the sixth, you have a great value at RB.

CJ Anderson has risen about two rounds since early June. To be honest, I was surprised he was that low to begin with, and I still have him higher in my rankings. He’ll see another bump in my rankings when I see him run and he looks even halfway decent. The opportunity for Anderson is great, being on a pretty good offense, under a great offensive coordinator who uses his running backs, and being besides another talented running back that isn’t built for a bellcow role.

CJ Anderson is more talented than Jonathan Stewart, so that’s already an upgrade for this team. Getting Norv Turner at coordinator will be huge for the developent of this offense, and Cam Newton also has more pass catchers to play with. This means they will be in scoring position more often, and I also wouldn’t be surprised if Norv limits Cam’s goal line carries slightly, meaning scoring opportunities for CJ Anderson. He is a great depth guy for your bench, and he will be a value pick on draft day.

Jamaal Williams was going in the early 12th round at the beginning of July, but he has risen a full round over the past couple weeks. This recent spike in ADP is thanks to fellow second-year Packers running back Aaron Jones and his two game suspension. This takes one of the heads out of the three-headed Green Bay backfield, meaning more touches for Williams.

As we head through training camp and preseason, I expect reports to come out from Green Bay saying Williams is the clear early down/short yardage back. He is the most obvious candidate for the majority of the carries, even when Jones returns. He simply is more talented and well-rounded, so expect his ADP to continue slowly rising.

Bears’ new tight end Trey Burton has risen a full round since early June, and his is being drafted as TE9. I have him at one slot lower in my rankings, moving him under Jordan Reed. Either way, Burton is a low-end TE1 heading into draft season, and he’s in a good position to succeed. However, he doesn’t really excite me, and he fits into that large tight end group with guys like OJ Howard, Jack Doyle, or Tyler Eifert where they could easily be a TE1 this season, but there’s some kind of risk involved. You can make a case for these players to be in any specific order, which means you should go with your gut, but don’t reach for this group of tight ends.