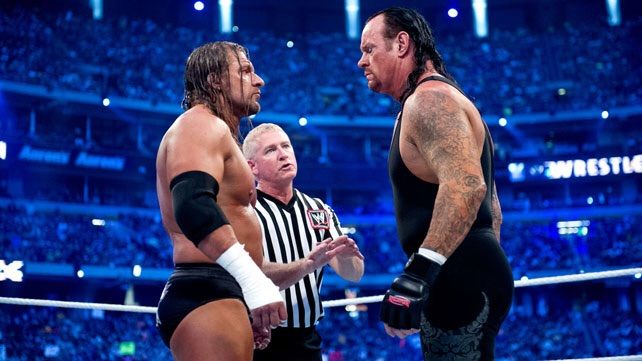 At the upcoming WWE Super Show-Down event in Melbourne, Australia, Triple H and Undertaker will face off inside a WWE ring one final time. (Credit: reddit.com)

It is a common theme for sports leagues to try and expand their brands and attract a fanbase that spans the globe. This has been seen with the NFL playing games in London, the NBA hosting exhibition games in China and Africa, and the UFC holding events throughout Europe and Brazil. This year, the WWE has joined the rush in pushing to expand its global following. The conclusion of Hell in a Cell this past Sunday marked the end of the final traditional WWE pay-per-view event on American soil until Survivor Series commences in mid-November.

WWE has been holding shows across the globe for several years, but not to the level in which they have this year. Outside of holding RAW and SmackDown Live in England once or twice a calendar year, WWE events on foreign shores have basically just been house shows. 2018 has seen WWE do a complete overhaul of their pay-per-view slate, with an emphasis on bringing the biggest events on the calendar into overseas markets. In less than three weeks’ time, Melbourne, Australia, will be the site of WWE Super Show-Down. This will be followed up by the company’s second pay-per-view in Saudi Arabia this year, WWE Crown Jewel. Sandwiched in between the two is the first ever all women’s pay-per-view event, dubbed as WWE Evolution. While this will be on American soil, it falls in line with Super Show-Down and Crown Jewel in that it breaks ranks from the traditional WWE pay-per-view circuit that fans have become accustomed to in recent years. The following table lists the traditional WWE pay-per-views from 2017 that were cut out this year, presumably to make room for the various overseas events.

With the decision to go back to RAW and SmackDown Live co-branded pay-per-view events, the need for these events isn’t necessarily there. However, the move to co-brand all pay-per-views also plays right into the WWE’s overseas push. They are easily able to make these events seem like regular pay-per-views while still including the top talent from both show brands when they fall in line with the mainstream pay-per-view format. With the company having inked a 10-year deal to hold events in Saudi Arabia, it will be interesting to see how the format and construction of the pay-per-views evolves throughout the course of that contract.

WWE has made every effort to bring out the best competitors for this series of global events. In addition to the top talents from the current RAW and SmackDown Live rosters, stars of generations past have also been heavily involved. Super Show-Down will feature Triple H battling the Undertaker. This match has received weekly hype on RAW and shows that the company is willing to go beyond the current roster storylines to make the global events appealing. Similar strategy was used for the Greatest Royal Rumble event, held back in April in Saudi Arabia. Triple H squared off against John Cena, the Undertaker was in action against Rusev, and the largest royal rumble ever assembled took place. The kicker with the GRR event was that WrestleMania 34 was held just three weeks prior. With all of the championships again put up for grabs to add hype to GRR, many criticized the WWE for almost using its biggest annual event, WrestleMania, as a springboard to hype the overseas event.

There were ultimately no title changes at GRR, and the 50-man royal rumble match carried no significance in terms of the championship picture on either RAW or SmackDown Live. This left many scratching their heads as to why the GRR was built up in the way that it was. The upcoming Super Show-Down and Crown Jewel events have the potential to transpire in similar fashion. On the RAW side, none of the titles will even be up for grabs at Super Show-Down as all the champions find themselves involved in tag team feuds. Meanwhile, SmackDown Live will produce title matches in Australia, they are just rematches from Hell in a Cell, aside from the unearned and odd tag team title opportunity granted to The Bar.

Crown Jewel will ultimately be leading into Survivor Series, taking place just 16 days before. It would be a little weird to change up the title picture drastically so close to one of the “Big Four” pay-per-view events. The big match already announced for Crown Jewel is a Universal Championship triple threat between Roman Reigns, Braun Strowman and Brock Lesnar, who shocked everyone with his return at Hell in a Cell. But did Lesnar return to actually compete for the belt once again? Or is he back just as a big name to help WWE promote its second event in Saudi Arabia this year? It’s certainly an interesting question to ponder, along with whether the global events are detrimental to the overall WWE storylines.

WWE certainly can’t be knocked for trying to promote its product and expand its fanbase across the globe. However, the company needs to be very careful not to disgruntle fans by having these global events carry too much weight and significance in the plots and feuds surrounding the title belts on both RAW and SmackDown Live. There is too much of a good thing in some cases, and WWE needs to walk the fine line while staying out of its own way if the global pay-per-view series is going to continue beyond 2018.