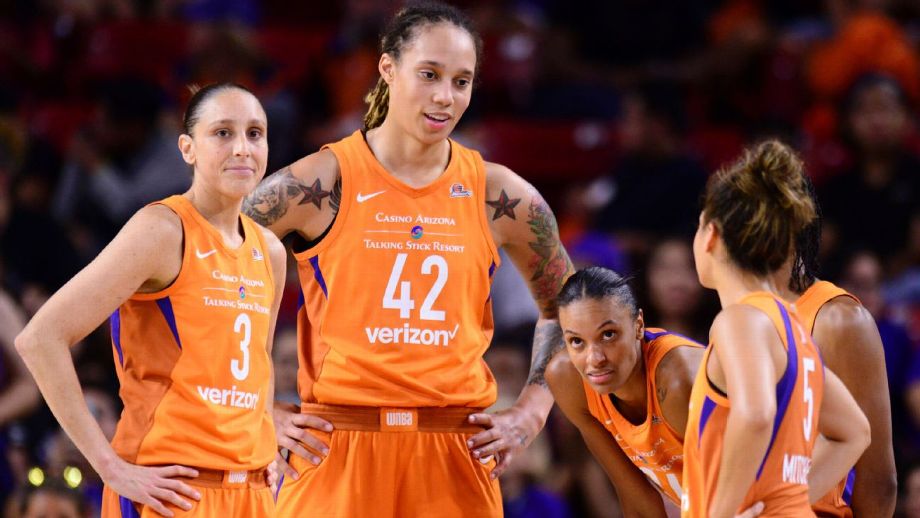 When a team can collectively shoot the lights out as the Phoenix Mercury did Tuesday night, they don’t necessarily need to play much defense to win. The Dallas Wings probably thought they were making out good, shooting 45.6% from the floor in a playoff game. That number was far below the 54.6% shooting on field goals by the Mercury. The figure included 13-29 shooting as a team from three-point range and spearheaded the 101-83 triumph.

The hot shooting was evident at particular times in both halves. Phoenix closed the first quarter of the game by making seven straight shots, but the Wings refused to go away early. The 18-point margin of victory was all thanks to a dominant second half performance by the Mercury. Dallas was only trailing by three at the break but had no answer for the barrage of offense Phoenix threw at them over the final two quarters. Six Mercury threes fell in in the third quarter, and an 11-0 run built up a 20-point lead that would never really be threatened the rest of the way.

DeWanna Bonner led all scorers on the night with 29 points for the Mercury. She notched a double-double line with 11 rebounds and added 4 assists for good measure. Diana Taurasi was masterful as usual. The WNBA’s all-time leading scorer came up with some very timely threes throughout the game to consistently thwart any run the Wings tried to make. She finished with a double-double of her own, scoring 26 points and 12 assists. Stephanie Talbot rounded out the trio of Mercury double-doubles with 11 points and 11 boards. Brittney Griner scored 17 points and managed to do the seemingly impossible task of keeping Wings center Liz Cambage somewhat contained.

Skylar Diggins-Smith led the Wings with 23 points, 7 assists, and 4 rebounds. The aforementioned Cambage put up 22 points, grabbed 12 boards and dished 6 helpers. Diggins-Smitha and Cambage were the only Dallas players to reach double figures. The lack of a major third offensive contributor doomed the Wings in this high scoring affair.

Things started ugly for the Los Angeles Sparks on their home floor in their first round playoff game against the defending champion Minnesota Lynx. Sloppy play led to the Lynx gaining an early 11-point advantage. The fact that star Candice Parker was not feeling well was not helping things. During a timeout in the latter stages of the first quarter, head coach Brian Agler made a point of calling out Chelsea Gray and demanding she step up and lead the way. Gray took it upon herself to be the star of the night, scoring 26 points on 52.9% shooting to lead L.A. to a 75-68 victory.

While Gray set the tone for the Sparks throughout, it takes a full team effort to play good defense. Los Angeles managed to do so, holding Minnesota under 20 points in all but the second quarter. The Sparks did a great job of keeping the ball out of the primary offensive threats on the Lynx. When they did get it, seemingly every shot was contested and made difficult, to the tune of just 29 out of 63 Lynx shots being made. Poor Lynx free throw shooting throughout also proved critical.

It was fitting that the game ended on a strip steal and a pair of made free throws to ice it by Riquna Williams. Williams finished with 17 points (all in the second half) and 2 of the Sparks’ 9 total steals for the game. Despite still recovering from mononucleosis, Nneka Ogwumike put up 19 points and grabbed 5 rebounds. She was a big part of the 19-5 first half run that allowed L.A. to make up the early deficit and lead by three at halftime. Parker scored only two points, but she was able to pull down six boards and dish three assists on a night she clearly wasn’t feeling like herself.

Minnesota was led by reigning WNBA MVP Sylvia Fowles, who registered an 18-point, 12-rebound double-double. Maya Moore scored 14 points, gathered in 4 boards and passed 3 assists, but that line is below her usual standards. Temi Fagbenle was the only other Lynx in double figures, with 15 points. Lindsey Whalen scored nine points and also contributed five rebounds and five assists in what wound up being her final WNBA game. Whalen went public with her decision to retire prior to the conclusion of the regular season. It certainly feels like the end of an era for the Lynx, who have won four of the last seven WNBA titles.

The second round of the WNBA Playoffs will commence on Thursday, with two more single elimination games. The fifth-seeded Mercury will take on the fourth-seeded Connecticut Sun, while the sixth-seeded Sparks will battle the third-seeded Washington Mystics. The Seattle Storm and Atlanta Dream await the winners in best-of-5 semifinal series. Both games Thursday can be seen on ESPN2.