Will There be a New Era for the Toronto Raptors? 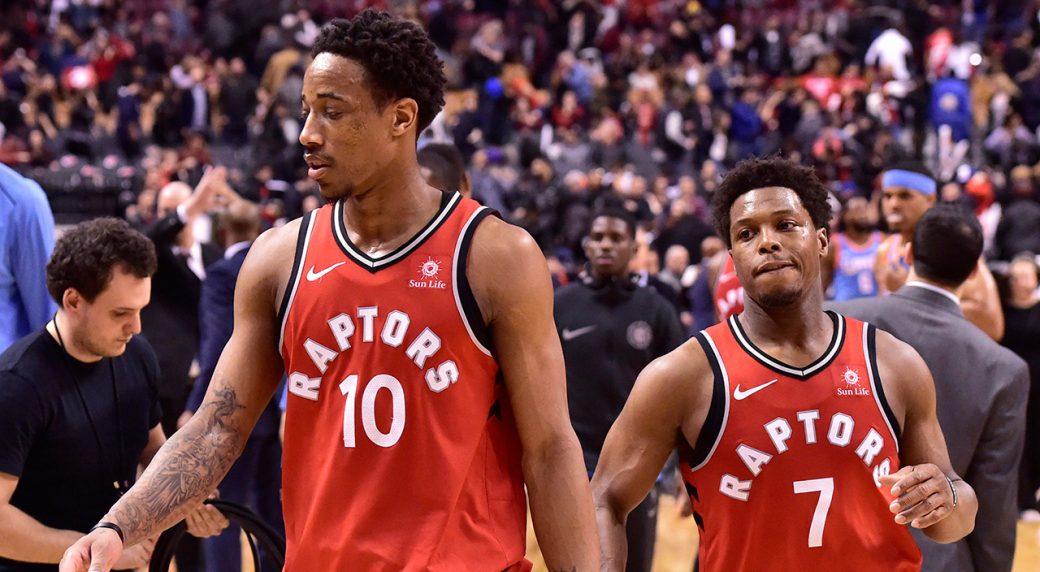 The Toronto Raptors finished the regular season as the best team in the Eastern Conference with a 59-23 record. Many believed that this would be the year Toronto had a legit shot at the NBA Finals. If they failed to do so, they would at least be extremely close. Yet, the Raptors had to take the Washington Wizards to six games in the first round and looked unimpressive. Beal and Wall both showed quality play, but it wasn’t as great as other stars in the league had played. Toronto, year after year, struggles in the first round and this was another example. But, Toronto won the series nonetheless.

Next, the Raptors faced the Cleveland Cavaliers. Many people believed that the Raptors could beat the Cavs and that it might be a close series. Others believed that Toronto wouldn’t have a chance because they can never beat LeBron. The Raptors proved that any hope in them was completely false. They got completely dismantled by the Cavaliers in four games and looked like one of the most pathetic one seeds in recent memory. This was by far the Cavs’ best series in the playoffs, and that has to say something about the Raptors. Toronto no doubt had the better team, but apparently the second they see that No. 23 jersey the city and team completely falls apart.

This was by far one of the most mind-boggling firings in NBA history. Casey brought his team one win away from 60 on the season and won a playoff series. Dwane Casey won Coach of the Year and yet his team decides that it’s his fault they can’t get to the Finals/past LeBron. Casey revamped the team this season and gave Toronto basically everything they needed to be successful. They had a top-5 offensive and defensive rating, and had the deepest bench in the league.

All of this sounds like amazing coaching and great playing because of it. However, for the past three seasons now the Raptors have been unable to get past Cleveland. Also, the last two seasons they’ve been swept by the Cavs and have struggled in the first round. It honestly seems like the Raptors are a great team, but the Cavs are their kryptonite.

It’s hard to justify firing the Coach of the Year, but Toronto felt the need. In my opinion, it was the lack of the Raptors’ stars stepping up. Kyle Lowry and DeMar DeRozan played well in the playoffs, but they didn’t exceed their normal numbers. What you see is what you get from these two. This backcourt needs to take their games to the next level in the playoffs and they simply don’t do that. The same could be said about some of the bench players, but overall this blame should go to the stars.

After firing Dwane Casey, the Toronto Raptors set out a search in and out-of-house for their next head coach. The head coach pool was below average this year. Mike Budenholzer was probably the best candidate for any team looking for a new start. However, shortly after Casey’s firing, Budenholzer was hired by the Milwaukee Bucks. After that, the head coaching search for Toronto was fairly small. Nick Nurse, an assistant coach under Casey, was the eventual hire for Toronto. Nurse was given a lot of credit for the improved offense this season in Toronto. Although firing Casey was a bad move, hiring Nick Nurse was the right choice.

In addition, the Raptors were nonexistent in the NBA draft. It was believed that with all of Toronto’s assets, they could trade a role player or two and get a pick in return. Nothing happened and therefore the Raptors at the moment will have the same roster as last season. Unfortunate for them to not get another young talent now. They could have used it in later trades this summer if needed.

It has come out in recent reports that the Toronto Raptors are shopping their players in order to find more help. The surprising thing about these rumors are that the Raptors are open to trading their stars, Kyle Lowry and DeMar DeRozan. Two All-Stars and yet, they are potentially on the trading block. I’m sure that Toronto would prefer to keep these two players and another piece around them by trading the role players. However, it seems as if Toronto is asking the same question that the Portland Trail Blazers are asking. Do we need to split up our backcourt?

I think the Raptors do need to find another star and preferably a new starting small forward or center. If Toronto wants to make it to the Finals, they may be in store for a busy summer. Toronto might be an interesting team to keep an eye on as July comes around.

When it comes to free agency for the Toronto Raptors, signing a player will be nearly impossible. The Raptors have two small contracts from Lucas Nogueira and Fred VanVleet expiring this summer. Despite this, the Raptors already have a hefty payroll this year of $127.5 million. This is much more than last year’s payroll of $116.5 million. The reason for this is a few pay raises, but mainly Norman Powell’s contract extension from $1.4 million to $9.3 million goes into effect this year.

This forces Toronto to look at trades in order to improve instead. As it was mentioned earlier, the Raptors should look to improve their roster at the small forward or center position. Preferably someone that can score consistently and has good size as a defender. It wouldn’t be surprising if Toronto traded Ibaka for a better scoring power forward either.

There is a multitude of questions that the Raptors must be asking themselves. If LeBron leaves Cleveland, do they try and trade for Kevin Love? Do the Raptors have enough to trade for Kawhi? How about trading some young pieces in a three-way trade to ditch Jonas Valanciunas and get DeAndre Jordan if he opts in with the Clippers? The Raptors have options, but what is plausible?

An interesting experiment would be to play a few decent scorers at the 3 instead of trading for a star. Somewhat of a small forward committee. The Toronto Raptors have a huge task of figuring out what it is they want exactly. If LeBron moves to the Western Conference, do they just keep what they have? So many questions surrounding this team and that is why they could be a very interesting team to watch this summer.

What Should the Cavs Do if LeBron Leaves?
NBA Free Agency 2018: Best Available Players