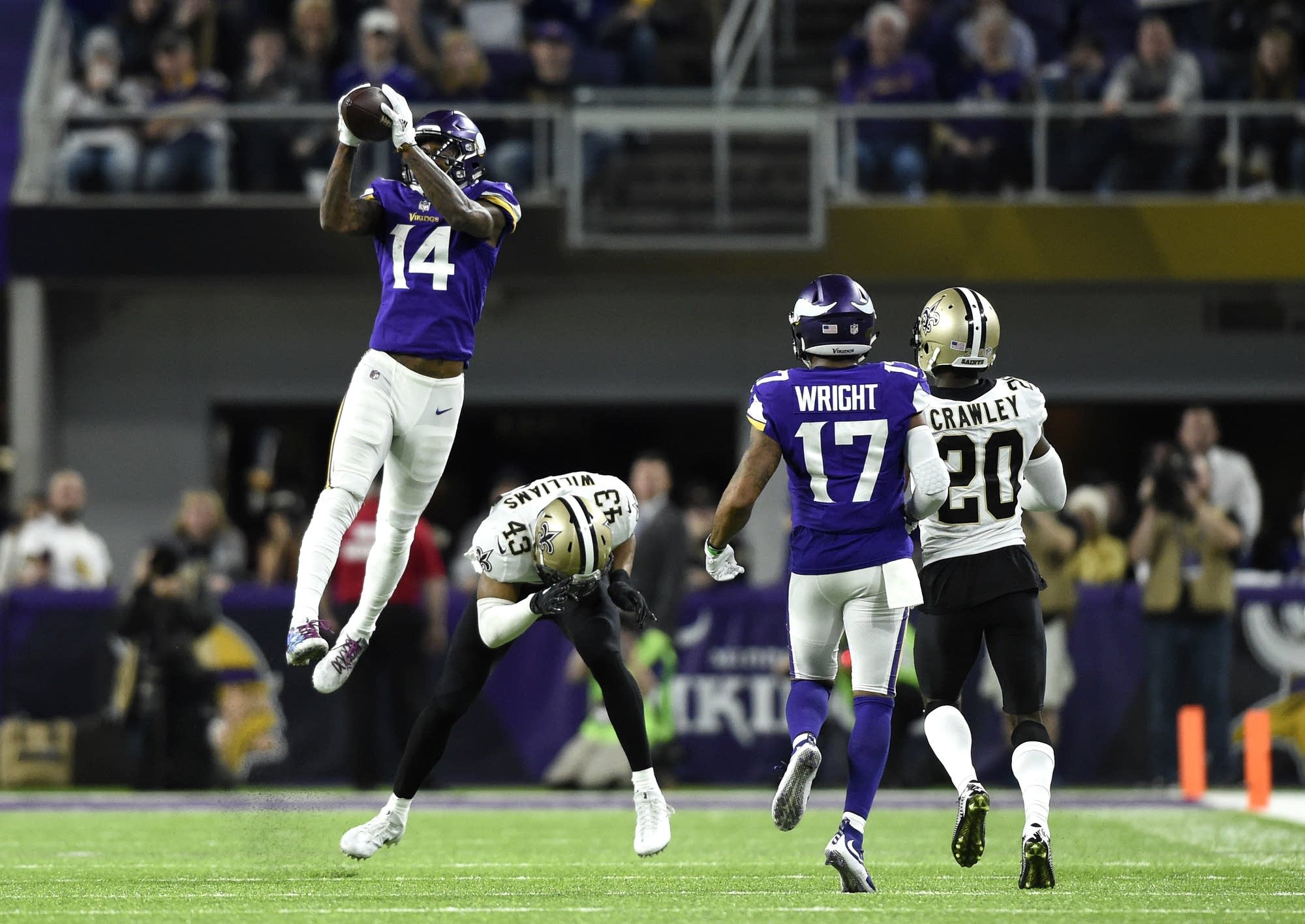 Emotions and memories of last year’s match-up between the Minnesota Vikings and the New Orleans Saints will be running rampant this weekend, as the Saints make the trip back to Minneapolis for the first time since their heart-breaking defeat to end their season last year. The walk-off touchdown is a rare occurrence, let alone in a playoff game to go to the NFC Championship game. The hookup between Case Keenum and Stefon Diggs is a play that Vikings fans won’t forget. It’s safe to say that the Saints players and fans won’t forget either.

Coming into the week, the Saints are rolling. After a season opening loss to the Tampa Bay Buccaneers, the Saints have ripped out five straight wins and look like one of the teams to beat in the NFC. Drew Brees is shattering records on a weekly basis, Alvin Kamara and Mark Ingram II are back with their one-two punch out of the backfield, and Michael Thomas is snagging every ball thrown his way.

On the other side, the Vikings seemed to have corrected the ship after their horrid start to the campaign. After getting worked by the Bills and losing to the Rams, the Vikings were in danger of letting the season get away from them early. However, three straight wins has them back in the driver’s seat of the NFC North. Coming off a dominating performance against the Jets, Minnesota is looking to keep their foot on the gas petal as they face off against New Orleans.

With the return of Mark Ingram II from suspension, the Saints officially have their star-studded backfield established again. Alvin Kamara is one of the most explosive players in the entire league. Ingram provides a true “between the tackles” type of runner who can also make plays in the passing game. The two running backs combined for 33 touches alone last week in a win against the Ravens. Saints head coach Sean Payton has creative ways to get his weapons the ball, especially when defended by line backers. Anthony Barr and Eric Kendricks have both been exposed at times while defending players out of the backfield this season. This will be an intriguing match-up to watch on Sunday.

Dalvin Cook has been hobbled by injuries all season long while trying to make a comeback from his ACL tear last season. With the Vikings so pass heavy the first few weeks, the running game really took a back seat to Kirk Cousins and his weapons on the edges. The past two weeks have seen the Vikings look to re-establish a running game with Latavius Murray. Murray has exploded for 224 rushing yards and three scores in the past two weeks. In order for Cousins to find his plethora of weapons, Murray will have to soften the Saints defense if Cook is sidelined again.

As Vikings safety George Iloka tweeted after last week’s game, there’s only three things that are guaranteed in today’s world, “Death, Taxes, and Adam Thielen.” Thielen has opened the season with seven straight 100-yard receiving games, setting a record as the only player in the Super Bowl era to complete that task. He leads the league in targets (89), catches (67), and yards (822). He’s tied for third in touchdown receptions. Without a doubt, Thielen benefits from opposing defenses providing a ton of attention to his counterpart, Stefon Diggs. With that being said, nobody can debate that Thielen is proving to be one of the best in the game. The Saints will have to contain him to keep the Vikings offense under control.

With the threat of Drew Brees throwing the ball anywhere, Michael Thomas continues to benefit from having a dime-dropping delight in Brees. Just like Thielen, Thomas is the beneficiary of the threat of his explosive teammates. Alvin Kamara and Mark Ingram II provide a dangerous threat in the running game. With their play action, Brees is able to utilize and find Thomas on the edges on a consistent basis. Thomas has pulled in 53/58 (91.3%) targets this year, best in the league. With two of the top three corners for the Vikings potentially out with injuries, Thomas could be in store for a big game on Sunday night.

Drew Brees is special. This isn’t a secret. The man is re-writing record books and will continue to shatter records if he stays healthy. His arsenal of weapons is deep and he knows how to use them. The Vikings defense is banged up, to say the least. Mike Hughes is out with a torn ACL. Andrew Sendejo has been out for a few weeks with numerous injuries. Xavier Rhodes is unlikely to play due to an ankle sprain. This places the Vikings pass coverage in a tough spot as they look to their depth to provide a boost in the absence of their starters.

With these things in mind, third down defense is going to be crucial for the Vikings. The Vikings are only allowing a league best 23% of third downs to be converted. In the past three games, Minnesota has only allowed 12% of conversions to happen on third down (4/32). On the flip side, New Orleans is converting just over 43% of their third downs on offense. For the Vikings to slow down this juggernaut of an offense, keeping the Saints in third and long situations will be key.

With the Vikings being so banged up on defense, slowing down Brees and the Saints will be a difficult challenge. The Saints are also coming in with the confidence stemming from five straight wins and extra fuel to wash the bad taste out of their mouths from the playoff game last season. With that being said, the Saints will leave Minneapolis a bit more pleased than they did last season.