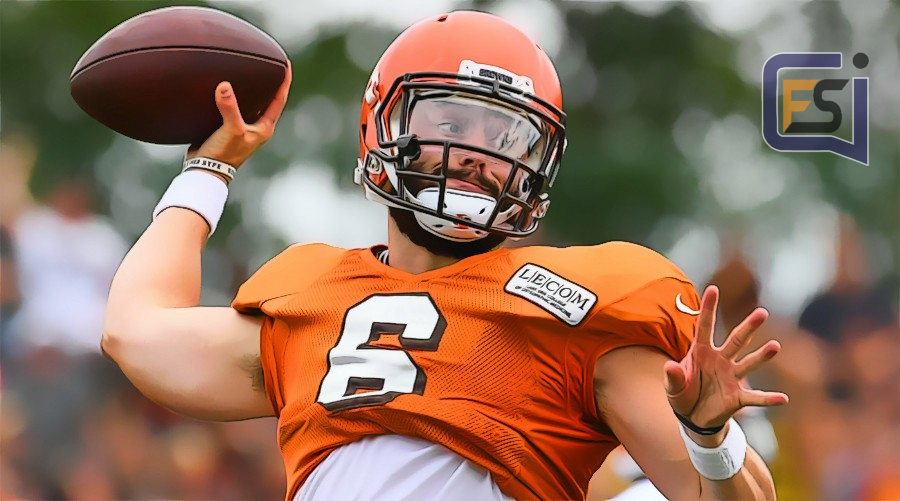 After episode one of Hard Knocks, there was no confidence in anybody but Jarvis Landry in the Cleveland Browns organization. But in their Browns debut against the Giants, both Tyrod Taylor and Baker Mayfield gave us some impressive plays.

Despite playing just two drives, Tyrod Taylor gave us plenty of good things to talk about. The excitement began with the Browns’ first snap, as Tyrod threw a beautiful pass to Jarvis Landry up the left sideline, good for 31 yards.

However, it was the Browns’ second drive that left us impressed. In Tyrod’s last drive of the evening, OC Todd Haley figured it was a good time to push the pace and practice their hurry-up offense. The Giants defense had no answers, and Tyrod hit Rashard Higgins for a 26-yard gain, then David Njoku for the 36-yard touchdown. The drive displayed Tyrod’s efficient passing, his ability to communicate with the inexperienced crew around him, and that he’s capable of leading this offense. He finished the night 5-5 for 99 yards and a touchdown, sporting a 158.3 passer rating.

Again, it was the second drive for the Browns quarterback that left us impressed most. After getting those first drive jitters out, Mayfield imposed his will on the Giants in this drive. It started with him throwing a beautiful back shoulder pass to Rashard Higgins. The running game continued to struggle and there was a penalty, which the Browns behind the chains, but Baker stepped up in the pocket and converted a tough 3rd & 18. He converted another third down with his legs, then a 4th & 2 in the red zone by scrambling. The drive finished with a Baker Mayfield throw and David Njoku catching his second touchdown.

One of Baker’s favorite targets throughout the night was fellow rookie Antonio Callaway. The two finally hooked up for a big gain early in the third quarter, when Mayfield threw a bullet for a 54-yard touchdown. Baker Mayfield finished the night 11-20 for 212 yards, 2 touchdowns, 125.4 passer rating.

Saquon Barkley Explodes Out the Gate

While most of the focus was on the Browns, the other spotlight was on the second overall pick, Saquon Barkley. In his first carry for the Giants, Barkley showed patience, then exploded through the running lane for 39 yards. It definitely was Le’Veon Bell-esque. Overall, his offensive line didn’t help him out much, but his patience and ability to bounce the ball outside led Barkley to finish with 43 yards on five carries. If the Giants can begin opening up running lanes between the tackles, it will be a long season for opposing defenses.

Fantasy Sleeper for all 32 NFL Teams

A Fantasy Sleeper for all 32 NFL Teams
Who Looked Good, Who Didn’t in Steelers Preseason Debut