Suns Get Big Efforts From Unlikely Sources in Blowout of Spurs 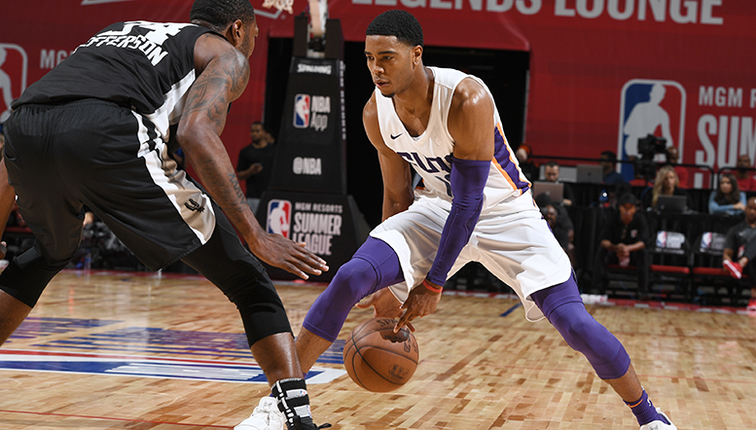 The Phoenix Suns will have one of the best young cores heading into the 2018 season. Whether it’s budding superstar Devin Booker, the quietly productive TJ Warren, or the uber-explosive Josh Jackson, the Suns have a plethora of young talent. In addition, throw in the first-overall pick DeAndre Ayton and you have the makings of the next great NBA power team.

Of course, most of the Suns’ young core was not even placed on the Summer League roster. The bulk of the team’s core is either too seasoned or too well established to need Summer League play. Even Ayton, who is on the roster, received rest in the game against the Spurs. With that said, the lack of need for the top talent to prove themselves has opened the door for others.

The unlikely hero for the night was former Radford star Javonte Green. The four-year collegiate player has yet to solidify his place in the NBA with any one team. At 6’4″, Green’s skillset is that of a strange guard-forward hybrid that is partially to blame for his lack of fit in the NBA. He is a bit too small to be a forward but lacks the skill set of a true NBA guard. Green proved Friday his tweener status does not mean he cannot play ball.

Green led the Suns in scoring with 20 points on a blistering 8-11 shooting (72.7%). He landed 2 of 4 from distance and hit both of his free throw attempts. Green was also active defensively with 2 steals and a block in the monstrous win for the Suns.

Forward Alec Peters also played the role of breakout hero in the win. Peters, a former Valparaiso great, scored 17 points himself. He coupled the scoring effort with 4 made three-pointers, 4 rebounds, and 2 steals. Peters led the team in +/-, as well. The 38 +/- rating the second-year player posted made him one of three Suns to post a +/- of over 30, an astounding statistic for both Peters and the team.

Spurs Crumble Across the Board

There was almost no positive for the Spurs Summer League team in the disastrous loss to the Suns. Summer standout Jaron Blossomgame was quiet in only 15 minutes of action. Center Amida Brimah made 4-4 shots, but finished with only the 8 points to go along with 3 rebounds in 17 minutes. Summer scoring leader Derrick White did not play in the contest. First-round pick Lonnie Walker IV also sat the game out.

In short, it is almost no surprise the Spurs were blown out in the contest. Two of the team’s three best players did not play while the one that did play only saw 15 minutes of court time. The Spurs actually only had one player reach double figures, former NC State swingman Maverick Rowan (11 points).

The Summer League has never been about wins and losses, which is certainly a positive for the Spurs after such a massive defeat. The experience for the players and the coaches is what is crucial in the Summer League. Learning how to handle defeat is just as important as learning how to win, and the Spurs should be able to take a lot from the thrashing the Suns handed them Friday night.