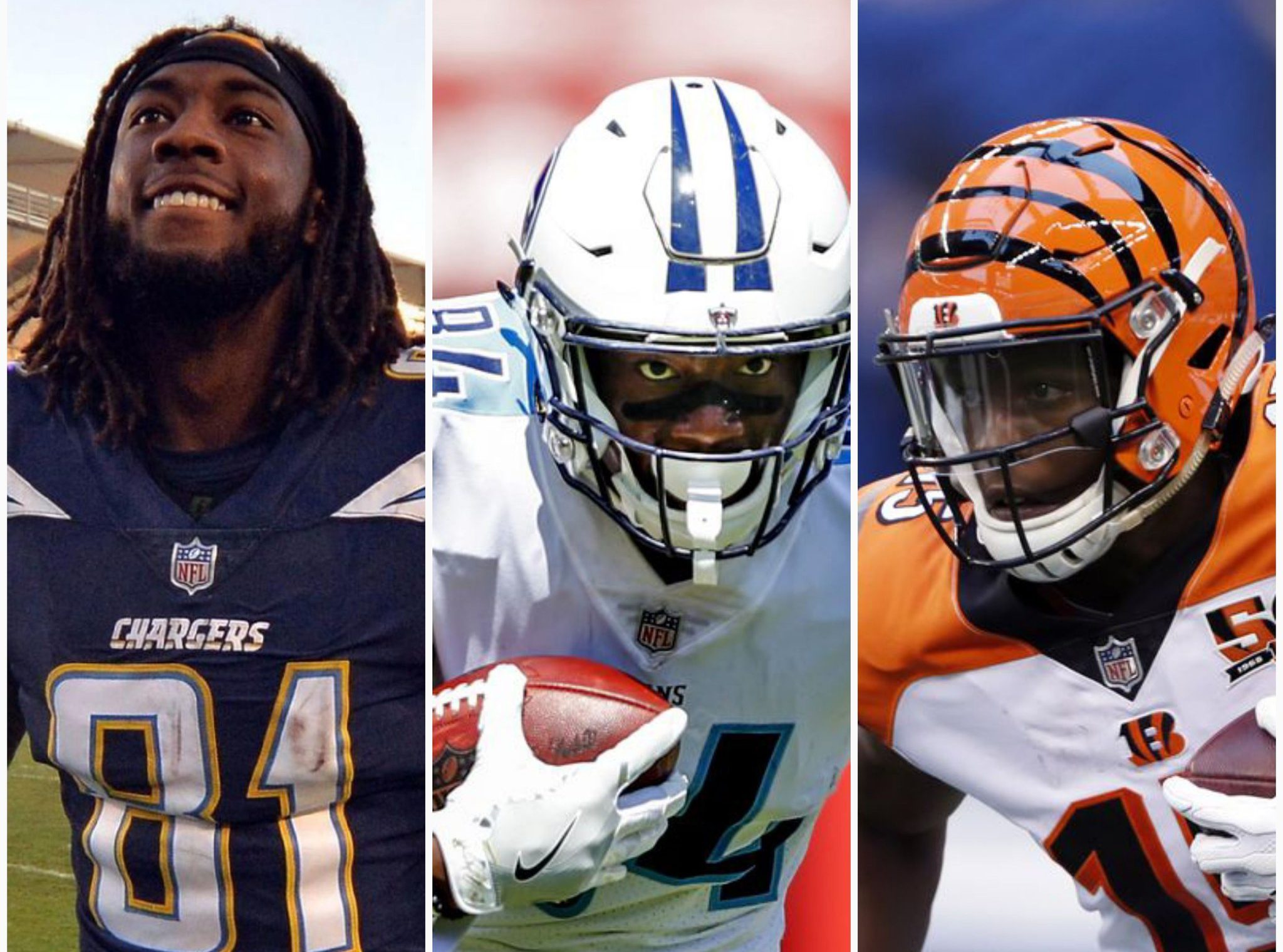 If the 2014 NFL Draft was the year of the wide receiver, then the 2017 Draft was the sequel we had all been waiting for…or so we thought. Three of the top ten draft picks in 2017 were wide receivers, who all came with somewhat high fantasy expectations. However, Corey Davis, Mike Williams and John Ross were never able to truly showcase their first-round talents in their rookie season and left some fantasy owners wondering what to do with them for the upcoming 2018 season. Can these three fantasy duds become fantasy studs this season? Let’s dive in a little deeper to find out.

After dealing with a hamstring injury and missing all of the 2017 preseason, Corey Davis opened the season against the Oakland Raiders with an impressive 6 receptions on 10 targets, totaling 69 yards and 12.9 fantasy points (PPR) in his first professional outing. A strong first impression for fantasy owners, who all invested a draft pick in the high profile receiver. Despite a strong start to his rookie campaign, Davis re-aggravated his hamstring injury in week 2 and missed five straight weeks to follow.

After losing the first half of his season to injury, Davis returned in week 9 to post another underwhelming fantasy performance against Baltimore, with a 2-28-0 stat line for 4.8 fantasy points. The struggle continued, as Davis averaged just 5.8 fantasy PPG from weeks 9-15, but Davis flashed yet again in week 16, posting a season-high 6-91-0 stat line for 15.1 fantasy points. Davis finished the season with 34 receptions, 375 yards, and 0 touchdowns in his rookie campaign.

At least some of Davis’ lack of fantasy production can be tied with Marcus Mariota’s lackluster season. Mariota had a 49% red zone completion percentage and a very mild 84 passer rating. Despite Mariota’s struggles under center and a few injury-plagued weeks to start the season, Davis flashed the ability to be the true X receiver on the Titans offense. With no notable free agent signings at the wide receiver position and a full healthy offseason for Corey Davis, we can expect a healthy uptick in fantasy production from the former 5th overall pick in the 2017 NFL Draft. Davis is being drafted as the WR27 in PPR formats. Expect Davis to outperform his current ADP, but not by much.

Williams was yet another high profile wide receiver to have an injury-plagued rookie campaign that left the fantasy community with a bitter taste in their mouths. After suffering a herniated disc in his back on the first day of rookie minicamp last offseason, things never seemed to come together for the talented rookie.

Williams missed the first five games of the season, and when he finally did see live game action, he did not live up to the hype. In his first game action, Williams only recorded a single catch for 15 yards. The tough sledding continued through the rest of the season, as Williams averaged 2.2 fantasy ppg. In that same span, Williams maintained just 7.9% of the offense’s target share. It doesn’t take a rocket scientist to see that Williams missing his entire rookie offseason affected his rapport with Philip Rivers, and his season stat line (or lack thereof) clearly reflects that.

Chargers up-and-coming tight end Hunter Henry tore his ACL during OTAs in late May, leaving a considerable amount of targets up for grabs in a high-powered offense. In a crowded wide receiver room, Williams has some work cut out for him, as he is sitting behind Tyrell Williams for the WR2 spot on the depth chart. Although he comes into camp as the WR 3-4 in the Chargers offense and Keenan Allen is slated to have a monster year opposite of him, Mike Williams’ big-play ability, as well as red zone efficiency, are reasons he will likely see plenty of work this season. Williams is being drafted as the WR50 in PPR formats. If he can stay healthy and available, expect Williams to outperform his current ADP by a considerable amount

Perhaps the most difficult player to predict of these top three receivers is John Ross. In the 2017 NFL Combine, Ross blew the football world away when he reset the 40-yard dash record with a blazing 4.22 second 40. Ross has a lengthy injury history that dates back to college, and much like his counterparts, it affected his rookie season in the NFL. Following the 2017 combine, Ross underwent shoulder surgery and also suffered a knee injury close to the start of the season.

Ross only appeared in three games over the course of the 2017 season and did not record a catch. His only statistics came from his lone rush attempt in week 2 that went all of 12 yards, only to end with Ross fumbling the ball. A sequence that got Ross both benched in real life and in fantasy. Ross’ knee injury continued to nag him until week 8 when he was a full go, but failed to capitalize on his only target of the game. Ross did appear again in the Bengals week 10 game, where he was not part of the game plan. Ross then remained a healthy scratch until being placed on IR in week 13 and having yet another shoulder surgery on the opposite side of the one he had before the season started.

Ross’ injury-riddled season makes his fantasy outlook for 2018 almost unpredictable. The Bengals made good strides this offseason to protect quarterback Andy Dalton, which bodes extremely well for the passing game (see Dalton’s 2015 statistics). A.J. Green is locked and loaded as the teams WR1 and veteran Branden LaFell looks to have a hold on the WR2 position, leaving the WR3 spot up for grabs between both John Ross and Tyler Boyd. The emergence of Joe Mixon as a viable pass-catching back and the potential return of Tyler Eifert could also challenge Ross for targets as well. Although Ross is expected to have some fantasy and real-life impact this season, we won’t know how he fits into this potentially high-powered offense until later in training camp and preseason. Ross is going undrafted and remains a coin flip in all fantasy formats.