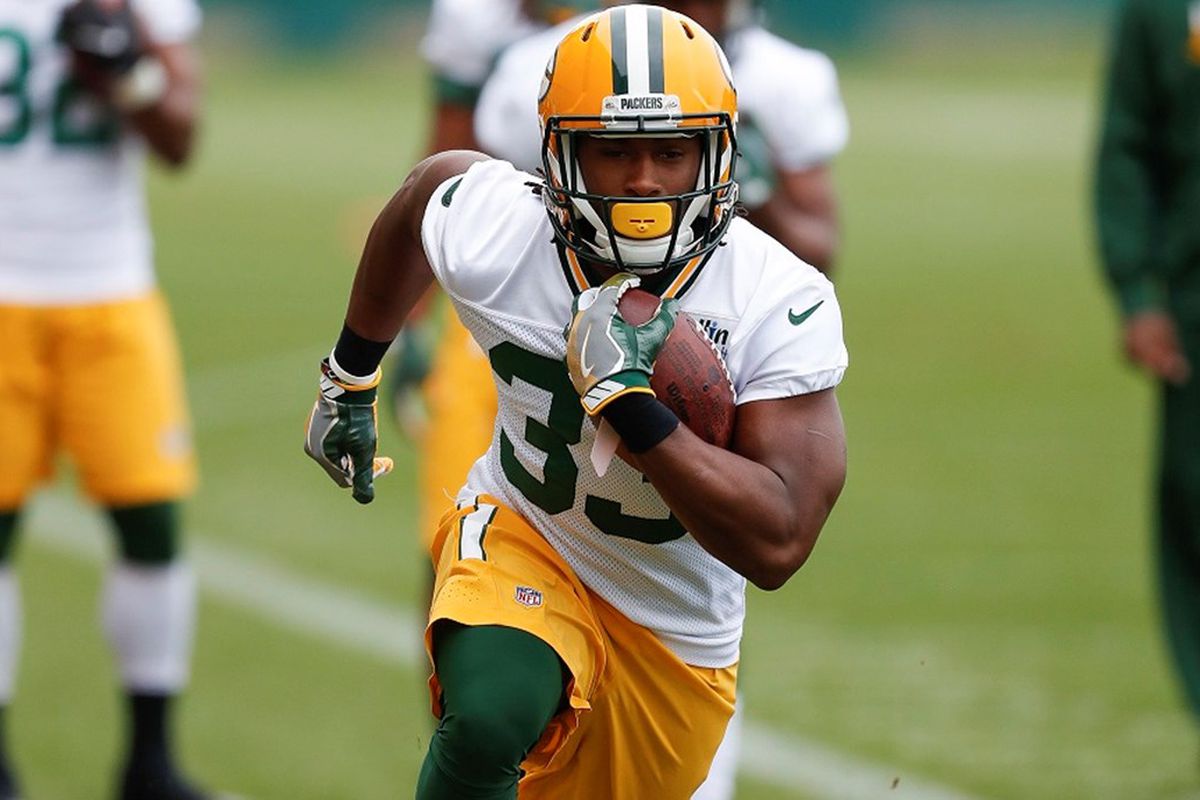 For the past nine seasons, Aaron Rodgers has been tearing apart opposing defenses for the Green Bay Packers. This season, there could be another Aaron terrorizing defenses right next to #12, Aaron “Showtyme” Jones. The little-known product out of the University of Texas-El Paso could go down as one of the steals of the 2017 NFL Draft, where the Packers took him in the 5th Round, the 182nd overall pick. Jones can do it all on the field, as he proved at UTEP.

Jones might be the most dynamic back of the three the Packers took in this year’s draft. In an option offense, the 5’9”, 208-pound running back set the school record for career rushing yards (4,114), single-season rushing yards (1,773, good for 4th in the NCAA), career 100-yard rushing game (17), 200-yard rushing games (5), and holds the school record for longest run play with a 91-yard scamper. Don’t let these numbers fool you though, some of his biggest plays came in the air, which presumably is one of the reasons the Packers took him to compliment wide receiver turned running back Ty Montgomery. In a one-on-one interview with Aaron after practice Tuesday, Jones touched on the complementary nature of to Ty: “(Our) game is kinda similar in that we can catch the ball really well out the backfield.” Jones also said that he feels like he has improved his route running precision the most in his brief time in the NFL, by asking guys like Ty Montgomery, Davante Adams and Randall Cobb for advice: “If I have questions about getting off the line, I’ll go ask them, knowing they’ve played the position well for a number of years.” Jones also knows the number one job of being a member of the Packers is protecting the other Aaron, the 2x MVP quarterback that captains the ship. Jones has made several big plays in practice, including a pancake block of Packers linebacker, Jake Ryan. Jones noted that the transition for him was easy: “We do the same things here that we do at UTEP, we use most of the same terminology.”

Although he has yet to play a down in the NFL, Jones has immense potential. At the NFL combine, Jones posted a 4.56 40-yard dash, yet seems to play faster. Following the draft, Eliot Wolf, Packers director of personnel, had this to say: “If you see Aaron’s tape, he’s really fast. I think he ran 4.51, but that was a little surprising. We thought he played faster than that. He was a guy who could consistently beat the angle of the safety. He had a lot of long runs for UTEP.” Wolf was onto something, as Jones had a run of 40 yards or more in eight of the twelve games UTEP last season. This is something the Packers really have lacked recently, maybe even since Ahman Green, a guy in the backfield that has another gear and can burn a defense. The other thing that Jones has, in my opinion, is his vision and football IQ. As you can see in the highlight tape below, his field presence is immense, making adjustments and cutbacks to end up in the end zone.

Off the field, Jones has the Green Bay mentality: strong family ties, including a twin brother who plays linebacker at UTEP, and speaking from firsthand experience, a very kind and humble presence. Jones still tweets with his college coach, retweeting him after that pancake block. It is also clear that Miners Nation is one hundred percent behind this young man. Jones is incredibly grateful to be in Green Bay, seeing his eyes light up when talking about how 63,000 people packed Lambeau Field for a practice and how he can’t wait for his first preseason game on Thursday, August 10th against the Eagles: “If we got that for Family Night, it’s going to be bigger and better crowd, I appreciate coming out here for Family Night and seeing that turnout.” Watch for August 10th to be Showtyme in Green Bay. You can follow Aaron on Twitter at @Showtyme_33 to follow his journey in the NFL.