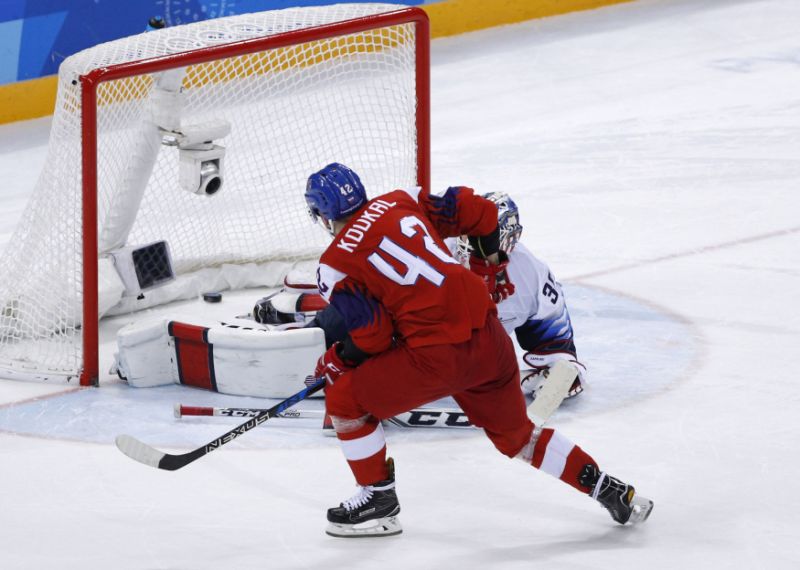 The margin between ecstasy and disappointment in sports can be razor-thin. Team USA narrowly found itself on the wrong side of that line in the quarterfinal round of the Olympic hockey tournament.

After battling favored Czech Republic all the way to a shootout, the Americans fell 3-2 to the second-seeded Czechs and were eliminated from the tournament Wednesday.

It’s a bitter ending for a U.S. squad that had an up-and-down tournament. After a bumpy ride in the preliminary round, the Americans had played their best game in a first-round win against Slovakia in the knockout round.

And for much of the game against the Czechs, the U.S. had the same sort of positive effort going. They led early after Ryan Donato’s fifth goal of the tournament before the Czechs got the next two scores to go up 2-1.

The Czechs outshot the U.S. 29-20 but Ryan Zapolski was up to the task with many big stops, as the U.S. killed off several shorthanded situations and actually tied the game 2-2 while shorthanded in the second period, as former NHL player Jim Slater got loose on a breakaway.

The final 30 minutes went scoreless, leading to the shootout round. But it all went wrong from there, as all five U.S. shooters failed to score. Zapolski stopped all Czech players except Petr Koukal. And just like that, it was over for Team USA.

“It’s tough to kind of go that way I think to end an Olympic tournament,” a disappointed Zapolski told reporters after the game. “For it to end in a shootout, it’s difficult.”

It’s pretty clear who is shaping as the favorite in the tournament. Since a surprise opening defeat against Slovakia, the Russian team has outscored its last three opponents 18-3.

That included a dominant performance Wednesday, as six different players scored and Russia held the Norwegians to just 14 shots on the goal in the game.

Russia will take on the Czech Republic in the first semifinal matchup Friday.

It’s perhaps the biggest upset in an Olympic hockey tournament since Belarus shocked Sweden back in 2002 in Salt Lake City.

Now the ninth-seeded Germans will be headed to the medal round after a game they led almost the whole way, then got pushed to overtime, then won anyway on Patrick Reimer’s score early in extra time.

It’s a tough ending for Sweden, which was unbeaten in pool play but bows out much earlier than expected.

The Canadians didn’t generate the sort of offense they have been used to, but they made Maxim Noreau’s early third period goal hold up.

Canada had to use both its goaltenders, as starter Ben Scrivens was shaken up early in the second period. Kevin Poulin finished up the game, and between them they stopped all 21 shots by the Finns.

Canada will face Germany in the semifinal round Friday.

Team Finland did have a winner Wednesday on the ice, as its women’s squad knocked off Russia 3-2 to claim the bronze medal in their tournament. It’s the third time Finland has won bronze in the Olympics.

The women’s tournament concludes tonight with the much-anticipated rematch of Team USA and Canada. The puck drops at 10:10 p.m. CT.

Updated Winter Olympics Medal Count
Once Again, It’s USA vs. Canada for the Gold
Czechs Next as Team USA Rolls in Opener