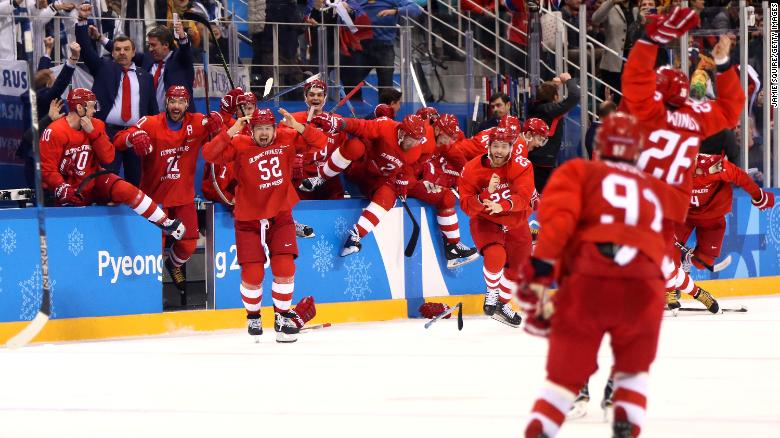 David had a second chance to slay Goliath, this time on the rink in the gold medal game of the Pyeongchang Winter Olympics, as upstart Germany tried to take down the heavily favored Olympic Athletes of Russia.

And it was as tense as it could be, going into overtime before the Russian squad finally was able to prevail 4-3 on Kirill Kaprizov’s goal 9:40 into the extra period.

The Russian team, forced to play under the Olympic flag and without their traditional colors due to sanctions placed on the nation for doping by the International Olympic Committee, won its final five games in the tournament to claim gold for the eighth time in their history (the first seven coming prior to 1980 as the Soviet Union.)

The winning goal capped a terrific game for Kaprizov, who had assisted on the first three Russian goals, two of them scored by Nikita Gusev.

Some controversy came out after the game. Due to the stipulations of the doping ban, Russia was not allowed its flag or colors, and in the gold medal ceremony, the Olympic song was played. Except the Russian team members all sang their national anthem in unison, an action that could draw repercussions down the road from the IOC.

“I think from the beginning we had this inkling inside each one of us and then, as we lined up, we said we will sing the anthem and that’s it,” the team’s Bogdan Kiselevich told reporters. “We’re prohibited from having the flag so we had to do something at least. We sang because we’re Russian people and when you win, the anthem is played. It was in our souls and heart.”

The result ended a stunning run by the Germans, who were just the No. 9 seed going into bracket play in the tournament. They then went on a run, defeating Switzerland, Sweden and Canada to reach the gold medal game for the first time ever. Even in defeat, Germany’s silver medal is their third medal, following two previous bronzes.

This year’s bronze medalists are Team Canada, who defeated the Czech Republic 6-4, avenging an earlier loss in the tournament.

Surprise! Germany Finds Way to Gold Medal Game
Is it Time for Esports to Join the Olympics?