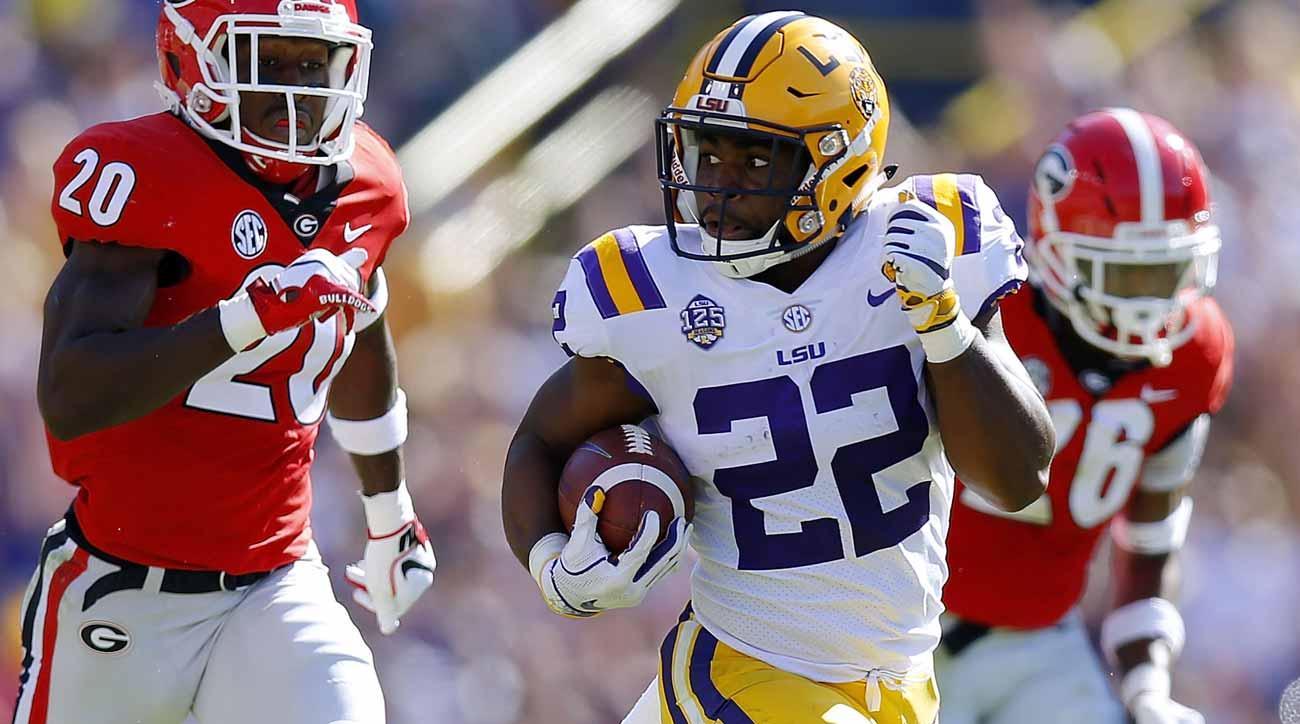 A big day on the ground for Clyde Edwards-Helaire helped propel LSU to the upset of Georgia. (Credit: Sports Illustrated)

It must have been the old Lucky 7’s at work, because Week 7 of the College Football season was truly insane. All told, eight teams ranked in the AP Top-25 took an L Saturday, with four of those residing in the Top-10. With the College Football Playoff Committee set to release its first rankings this week, the question is how much will these upsets affect teams moving forward? Shifting through so much chaos and upheaval is no easy task, but we will give it a shot!

A week after suffering an upset defeat of their own at the hands of Florida, LSU bounced back in a big way by taking down the defending College Football Playoff runners-up. Georgia had been showing signs of weakness prior to Saturday’s loss, but just hadn’t seen an opponent strong enough to fully exploit them. LSU was definitely strong enough, and took it to the Dogs. The Tigers defense intercepted Jake Fromm twice and Clyde Edwards-Helaire carried the offense with 145 yards rushing. Joe Burrow combined with Nick Brosette to rush for 130 more yards and 3 touchdowns. Burrow also passed for 200 yards. Needless to say, Georgia will need to shore up their run defense moving forward if they want to be true contenders.

The Bulldogs and Tigers still have everything in front of them, with each of their SEC losses coming against teams from the conference’s opposite division (Georgia is in the East, LSU the West). This win started off a gauntlet 3-game homestand for the Tigers which will also see Mississippi St. and Alabama come into Death Valley with a bye sandwiched in between. Meanwhile Georgia will battle Florida in Jacksonville in two weeks with control of the SEC East on the line.

When your Heisman Trophy candidate quarterback only throws for 100 yards, you’re going to be in some trouble. That is exactly what happened to West Virginia on Saturday. Will Grier was sorely outplayed by his Iowa St. counterpart Brock Purdy, and the Mountaineers suffered the upset loss on the road. The WVU offense forgot to show up, and the defense let the Cyclones run wild. Purdy piled up 254 yards passing and 3 scores. While Hakeem Butler had over 100 yards receiving, and David Montgomery was a workhorse, carrying the ball 29 times for 189 yards and a touchdown. The win marked the third in two-plus seasons at Iowa St. for coach Matt Campbell over a team ranked in the top 10.

With the Big 12 introducing a conference championship game for the first time this season, West Virginia still controls its own destiny to reach the Playoff, but their margin for error is close to none. They will likely need to beat both Texas and Oklahoma next month to reach the conference title game. Then, only the winner of that game will have a chance to make the Playoff field of four.

From a competitive standpoint, this was the most enjoyable game of the College Football weekend to watch. Both Washington and Oregon are too very talented teams and they went punch for punch for much of the afternoon. The Huskies missed a potential game-winning field goal at the end of regulation, and after settling for 3 on the first possession of overtime, the door was open for the Ducks. CJ Verdell won it with a 6-yard touchdown run, part of a 111-yard, 2-score day. Justin Herbert continued to build up his NFL Draft stock with 202 yards passing and a pair of scores. It was sweet revenge for the Ducks after throwing away the last big game in Eugene against Stanford last month.

The PAC-12 North is now officially a dog fight with Oregon, Washington, Stanford, and Washington St., all only having one conference loss through Week 7. By the end of the year when they have all played each other, only one can emerge and go to the PAC-12 Championship Game. Oregon travels to Washington St. this Saturday and will be in a great position if they pass that test. Meanwhile, Washington faces a tough crossover opponent in Colorado this week, and has Stanford and WSU to look forward to in November. If the PAC-12 wants a team in the Playoff, they need to hope one of these teams takes firm control going forward. According to ESPN’s Playoff Predictor, the PAC-12 has just a 1 in 20 chance of landing a team in the CFP field.

Penn St. may have led the entire game, but it was Michigan St. who took the lead when it counted most in the final minute. Brian Lewerke threw for 259 yards and 2 touchdowns, including a 25-yard TD pass to Felton Davis III to take the lead with 25 seconds left and Michigan St. pulled off the stunner a week after falling out of the Top 25 themselves by way of a loss to Northwestern. The defense was the story of the day for the Spartans, as they managed to hold Heisman candidate quarterback Trace McSorley to just 229 total yards.

It will be a tall ask for this two-loss Spartans team to be Playoff worthy, but with games against Michigan and Ohio St. still in front of them, winning the Big Ten East is not out of the question. Meanwhile, the Nittany Lions now find themselves with two Big Ten losses and will need to take care of business against Michigan and Wisconsin in back to back weeks early next month, plus get help to have any chance.

Other Top-25 Teams to Fall

Prior to Saturday, Miami’s only loss on the year was to LSU. The Hurricanes just aren’t what they were a season ago. With two losses now, their College Football Playoff hopes are close to dead. They will need to win out, win the ACC Coastal Division, and beat Clemson in the ACC Championship Game to have any shot.

Colorado entered the game unbeaten, but many chalked that up to their relatively weak strength of schedule. Now they find themselves facing an uphill climb starting this week with a trip to Seattle to play Washington. It is possible that a two-loss team could win the PAC-12 South Division, but the conference as a whole could be in trouble when it comes to the Playoff. USC certainly isn’t as strong a team as we have seen in years past, but they improved to a perfect 13-0 against Colorado all-time.

Of all the upsets from the weekend, this may have been the most surprising for me. Granted, Auburn was only ranked 21st, but Tennessee has looked downright awful for the most part entering Saturday’s game. They controlled the game from the onset and effectively ended Auburn’s Playoff hopes for good in the process.

The result of this game ultimately just confirms that the Big Ten East Division is once again much stronger than the West. Wisconsin will still find themselves in the conference title game provided they take care of business from here. The biggest conference hurdle left for the Badgers to clear will be another east opponent, Penn St. Meanwhile, Michigan has everything in front of them, and I mean everything. They travel to Michigan St. this coming weekend and follow that with Penn St. at home. If they survive both of those, the annual installment of Michigan-Ohio St. could mean even more this year.

It’s More Than a Wave