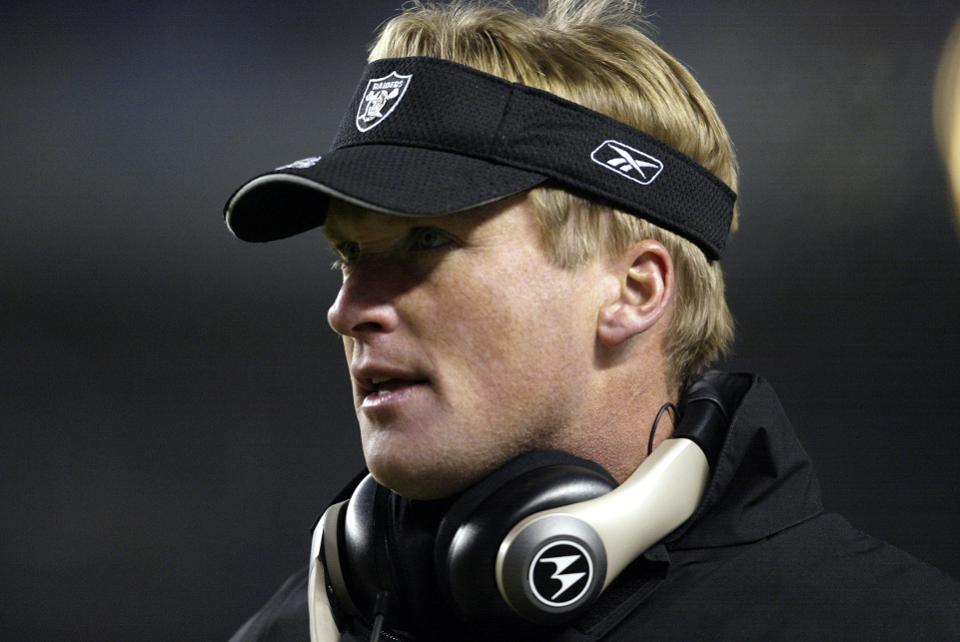 The (currently) Oakland Raiders and new head coach Jon Gruden agree to a 10-year, $100M contract, which is the longest ever in NFL history. The Raiders are planning a press conference Tuesday, January 9th to officially announce the signing of their new head coach.

The signing of coach Gruden back to the Raiders organization has been rumored for years, but became all but certain after the firing of Jack Del Rio immediately after their week 17 loss. Even when the secret was no more, Gruden played it coy by stating, “Well, I think I am being considered, yes. I hope I’m a candidate.” Of course you’re a candidate, coach. The last time the Raiders were in a Super Bowl, you were the coach that beat them.

Jon Gruden has had well-known success as an offensive mastermind. He spent his first four seasons in the NFL as an assistant or position coach for the 49ers, Steelers, then Packers. He received an offensive coordinator opportunity from Philadelphia, where he resided from 1995-97 before becoming head coach of the Raiders. Gruden helped rebuild this Raider team and saw success before being traded in 2002 to the Tampa Bay Buccaneers. The trade included Tampa’s 2002 and 2003 first-round picks, 2002 and 2004 second-round picks, and $8M in cash.

This trade left many Raider fans upset, and this feeling was multiplied after they witnessed their former head coach getting revenge over them in a 48-21 victory in Super Bowl XXXVII. Ever since this day, there has been a desire at some level to get that man back on the Raider sideline.

Expectations will be high for Gruden, Carr and company after going 12-4 just a season ago. The offense was underwhelming this year, after coming into the season with Super Bowl aspirations. Coach Gruden has been quietly assembling his staff over this past couple of weeks, and we have some of the names that will be joining him. Cowboys special teams coordinator Rich Bisaccia, former Bengals defensive coordinator Paul Guenther, and Rams quarterbacks coach Greg Olson are all expected to be on staff, the first two at their mentioned positions and Olson at offensive coordinator.

It’s Super Bowl or bust for this Raiders organization. They’re doing everything they can to keep their loyal Oakland fan base around while also giving Las Vegas something to get excited about.