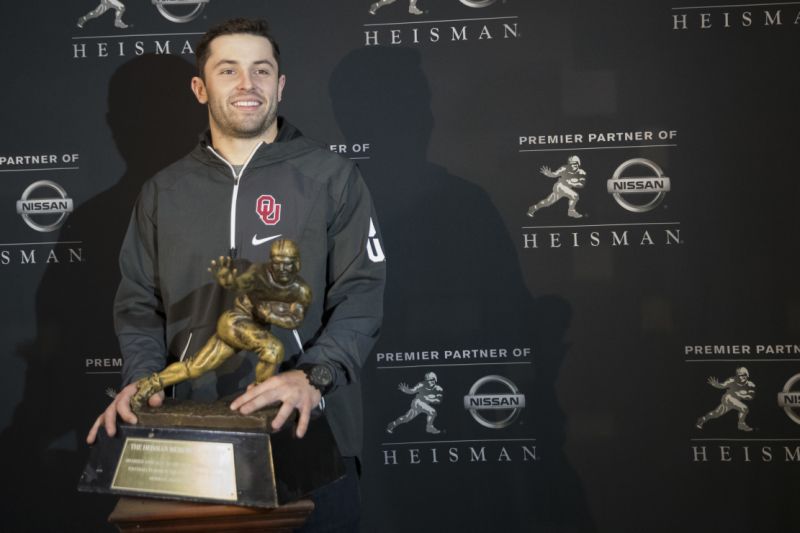 Mayfield, whose Oklahoma Sooners will be part of the College Football Playoff in a few weeks, finished ahead of runners-up Bryce Love of Stanford and Lamar Jackson of Louisville, last year’s winner. The quarterback had quite a road to this point, from being a high school star in Austin, Texas, who wasn’t recruited by his hometown team.

Mayfield walked on at Texas Tech and a couple of injuries to other quarterbacks led to him starting the first game of his true freshman year as a walk-on, virtually unheard of at any position, but especially so for a quarterback.

After a year at Tech, there were questions whether the Red Raiders would offer Mayfield a scholarship, so he moved on to Oklahoma, initially spending a period of time where he was just an undergraduate student before he officially could be added to the football team. When he was, big things happened. He led the team to three Big 12 championships and this year, despite losing three NFL skill players in Samaje Perine, Joe Mixon and Dede Westbrook, still put up huge numbers (41 touchdowns and five interceptions) as the Sooners racked up a 12-1 record.

The season wasn’t without incident. He was arrested in an offseason incident in Arkansas and then didn’t start his final home game due to some inappropriate behavior in a game at Kansas. His passion shined through in becoming a favorite of Sooner fans, no more so than after an early-season win at Ohio State, when he ran around the field with an OU flag before planting it on the 50 yard line.