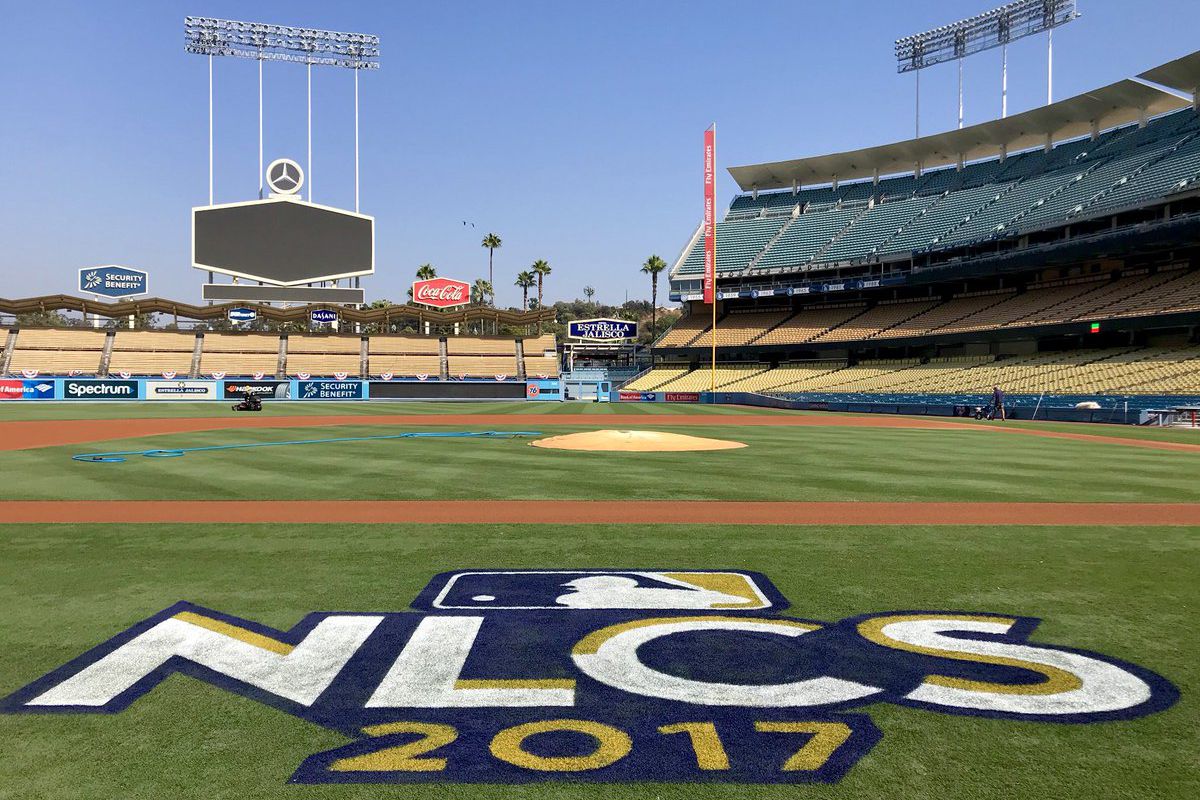 Tonight begins the National League Championship, and as I correctly predicted, the Chicago Cubs will be facing the Los Angeles Dodgers. While the Dodgers were able to sweep the Diamondbacks, the Cubs had to grind out the best-of-5 series, with Game 5 going to the wire. Before we look at the NLCS, let’s take a look back at the NLDS.

By no means was this a clean sweep, as the Dodgers gave up 11 runs across the three games, showing some vulnerability. Clayton Kershaw had a decent outing in Game 1, yet gave up four homeruns, the first National League pitcher to ever do that in a postseason game. However, Kershaw got the offense behind him and won Game 1. Game 2 was much of the same for the Dodger offense, although at one point, did trail after a first inning Paul Goldschmidt two-run home run. The Dodgers would take the lead in the fourth and not look back, led by three-hit performances from Yasiel Puig and Logan Forsythe. Game 3 was the Yu Darvish show, as he showed the world why the Dodgers acquired him at the trade deadline. Darvish gave up one run on two hits, and Cody Bellinger and Austin Barnes each went yard for the Dodgers offense.  The Dodgers were the first team since 2010 to sweep an LDS opponent.

Game 1 started with Chicago stealing home field advantage with a 3-0 win. Stephen Strasburg had held the Cubs hitless through 5 2/3 innings, until an error let Javier Baez on base and Kris Bryant singled him in(and advanced on the throw home) in the sixth. Anthony Rizzo would later knock Bryant in. Strasburg got the loss and Kyle Hendricks got the win after seven shutout innings of his own. Game 2 featured five long balls, starting with an Anthony Rendon dinger in the first of Lester to grab the lead. Chicago would tie the game up in the second, and later take the lead in the fourth. Chicago held that lead until the eight, where Washington put up five runs with Bryce Harper and Ryan Zimmerman each going deep. Game 3 shifted to Chicago, in another pitching showcase between Jose Quintana and Max Scherzer. The game was scoreless until the sixth, where two Kyle Schwarber errors in the same play allowed Daniel Murphy to race to third and Ryan Zimmerman doubled him in. Scherzer looked relentless early on, not allowing a hit through 6 ⅓. Ben Zobrist got Chicago in the hit column with a double that led to the removal of Scherzer, and Albert Almora came in to pinch hit for Schwarber and singled Zobrist in off of Sammy Solis, tying the game. Brandon Kintzler would go on to take the loss, being responsible for the runner on second when Anthony Rizzo hit an RBI single off of Oliver Perez to give the Cubs the lead.

With a chance to clinch a third-straight trip to the NLCS at home, Chicago sent Jake Arrieta to the hill following a one day rain delay. Arrieta gave up a single run in the third, and ultimately that would prove to be enough following a solid outing by Stephen Strasburg in a must-win game. Michael Taylor broke the game open with a grand slam in the top of the eighth, sealing victory for the Nationals and bringing Game 5 back to Washington. In the top of the first, Chicago would grab an early lead, but Washington was quick to answer putting up four in the second. Chicago wasn’t ready to go down easy and came back with two runs of their own in the third. In the fifth, Nationals skipper Dusty Baker chose to put Scherzer in, in an attempt to lock down the game. After what can only be described as ugly inning, which included a wild pitch, a hit by pitch, catcher’s interference and a throwing error on a dropped third strike, Chicago scored four and regained the lead 7-4. In the sixth, Chicago would add another run onto the lead, going up 8-4. Washington was able to rally for two in the bottom of the frame. Chicago would add another run, putting the lead up to 9-6. In the seventh and eighth, Washington would score a run, setting the stage for a one-run game in the ninth. The Cubs were held in check in the top half, and the Nats had the meat of the order coming up. Ultimately, Bryce Harper struck out to end the game and sent Chicago to another NLCS.

Is this the year Clayton Kershaw finally makes it to a World Series? Or, will the Cubs have the chance to do what no one since the 2000 Yankees have done, and repeat as World Series Champions? Ultimately, something has to give here. The Cubs were forced to use a lot of their pitching staff in the NLDS, and after celebrating their series win, had to fly to LA. This flight also included some plane issues and forced an early landing, while the Dodgers essentially had the week off after winning Game 3 on Monday. Things would seem to be lining up for the Dodgers to finally get over the proverbial hump. However, if there is a team that could overcome something like this, it almost has to be the Cubs. Wouldn’t it be poetic justice if the team that had to wait 108 years for a World Series Championship, could attempt to go back-to-back? Kershaw will be on the hill for the Dodgers in Game 1, as for the Cubs, there still hasn’t been an announcement of a starting pitcher, although speculation has led to John Lackey and Jose Quintana being the two most probable names. The Dodgers did win the regular season series 4-2 this year. Last year, this same series, with home field advantage reversed, went six games. This year is different. The Dodgers made moves to bolster their bullpen and rotation from last year’s NLCS. The emergence of Cody Bellinger to go along with Justin Turner, Corey Seager, and Yasiel Puig, among others, was huge. The Cubs also did lose a few pieces from last season’s World Series team. Bullpen depth could prove to be a deciding factor in this series, and if that’s the case, Chicago should watch out.

Dodgers in six. When it comes to picking this series, it’s a battle of head versus heart. By no means am I a Chicago Cubs fanboy, but I have several family connections to the area and they have been fun to watch, rarely overlapping with my favorite team growing up, the Brewers.  If I get struck down, just know that my late-Grandma Fischer had something with me not picking her Cubbies. That being said, as previously mentioned, Chicago’s rotation and bullpen just seem gassed. Chicago has the offensive fire-power to combat the Dodgers at full strength, but when having to go in depleted against a rested Dodgers team, it doesn’t look pretty for the defending champs.