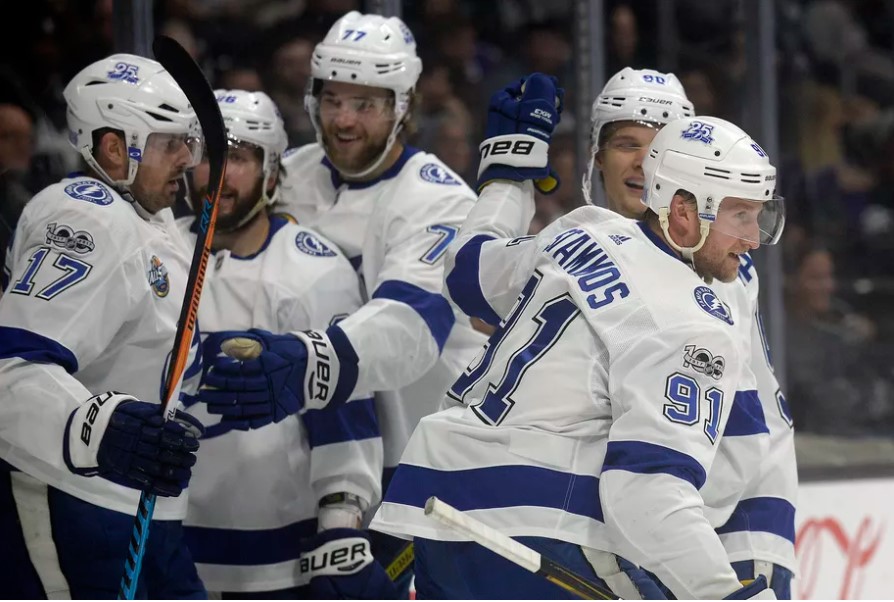 Washington Capitals: Up six spots from 15 to 9

Dallas Stars: Down seven spots from 11 to 18

The Devils had a bit of a down week, going just 1-2 and falling three spots in the rankings. The issue? After giving up just one goal to start the week in Columbus, Cory Schneider gave up five goals the next day at home against the Blue Jackets and Keith Kincaid followed that up by giving up five more in New York to the Rangers. In both of those games, the Devils were outshot by at least 14 shots. New Jersey will look to get back on track in a three-game week, as they face the Kings and Stars at home while facing the Canadiens in Montreal in between.

Man oh man is this team hot. The Capitals have won 7-of-8 and went 3-0 this past week with wins at home over San Jose, Chicago and New York. Whats working? The top line of Ovechkin-Kuznetsov-Wilson. They combined for six goals and 14 points last week in their three wins. The Capitals will look to keep it going in their four games this week, where they take on the Islanders, Capitals, Bruins and Ducks.

After moving up to second in the rankings, the Jets had their worst week of the season, going winless against the Red Wings, Panthers, and Lightning. The Jets struggled to keep the puck out of their own net, as they gave up 15 goals in the three losses, while their powerplay went just 2-for-14. The Jets will look to get back on track this week with four games against the Canucks, Blackhawks, and a home-and-home against the Blues.

I think it is officially time we take this team as serious contenders. Vegas had another perfect week, going 3-0 with wins over Anaheim and Nashville in shootouts, and a regulation road win over Dallas. Backup netminder Malcolm Subban continues to get it done in the absence of Marc-Andre Fleury, getting two more wins this week to improve his record to 7-2. The Knights will look to keep cooking at home, where they are 11-2, as they play host to Carolina, Pittsburgh and Florida this week.

Columbus had another quality week, going 2-1 with wins over the Devils and Coyotes. Goaltending continues to be the name of the game for Columbus, as Sergei Bobrovsky pitched a 35-save shutout against the Coyotes, and sports top-five numbers in both GAA (2.06) and SV% (.930). The Blue Jackets have another three-game week, as they play host to Edmonton and the New York Islanders before finishing the week on the road in Carolina.

The Leafs had a very solid week, going 3-0 with wins over Calgary, at Pittsburgh, and Edmonton. The interesting thing? The Leafs did it with goaltending. Frederik Anderson gave up just four goals in the first two games before backup Curtis McElhinney pitched a 41-save shutout of the Edmonton Oilers. If the Leafs can get solid goaltending with the offense that they have, look out. The Leafs will have to go on the road for three this week, as they play the Flyers, Wild and Red Wings.

The Predators continued their consistent play, as they went 2-0-1 with wins over Boston and Dallas before ending the week with a home shootout loss to the Golden Knights. Pekka Rinne and Jusse Saros continue to be a strong duo in net, as Saros gave up just two goals in the game he won, while Rinne is tied for fourth in the NHL with 16 wins. The Predators will take their strong play on the road for three games as they take on the Canucks, Oilers and Flames.

Is anyone playing better hockey than the Kings right now? The Kings have won eight in a row, going 3-0 this week with wins at home over Minnesota, Ottawa in overtime, and Carolina in overtime. How have the Kings won eight in a row? Goaltending! The Kings have given up more than two goals during this win streak just once, and in that game they gave up just three. Starting netminder Jonathan Quick has given up just nine goals in six games during this eight-game win streak. The Kings will begin a road trip this week, with three games on the road against the Devils, Rangers and Islanders.

The Blues answered the Kings hot streak with a 4-0 week with wins over Montreal, Dallas, Detroit and Buffalo. The Blues had a solid week behind a hat trick from Brayden Schenn and a shutout from goaltender Jake Allen. The loss of winger Jaden Schwartz for six weeks will be critical, as Schwartz leads the team with 21 assists and is second on the team with 35 points. The Blues will look to flex their muscles this week as they play host to the Lightning, Ducks and Jets in a tough week.

The Lightning continue to prod along with another perfect 3-0 week, with wins over the Islanders, Avalanche and Jets. After a 3-2 loss to the Bruins, the Lightning switched up their lines. The result? Five goals, six goals, five goals, then four goals. The Lightning are hitting on all cylinders right now. They will start a road trip with three games against the Blues, Coyotes and Avalanche.