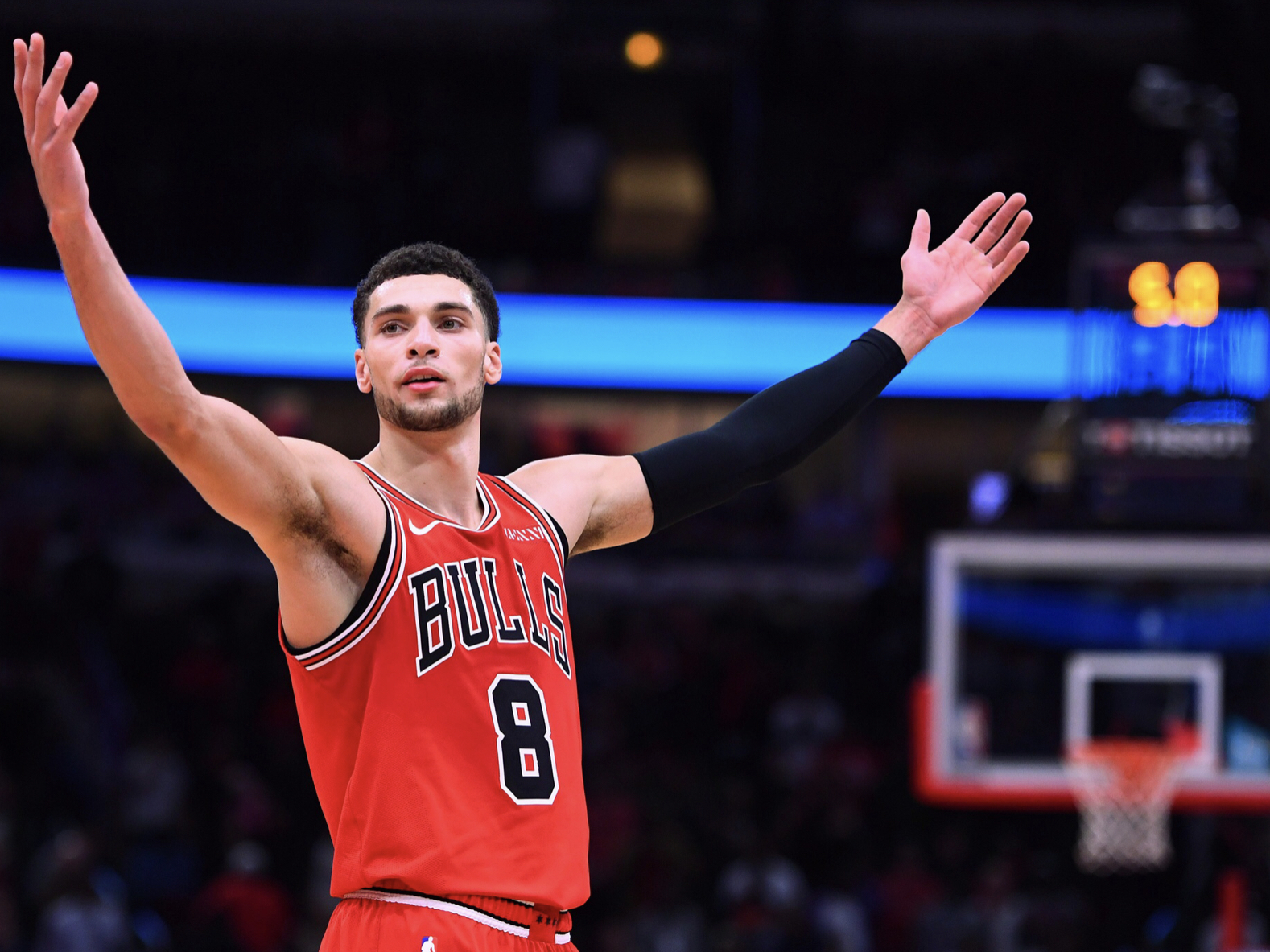 In his rookie season, Kevin Hurter started 59 games, averaged 9.7 points per game, and shot 38.5% from three-point range. At just 21 years old, the “Red Mamba” will certainly break the double-digit mark for points per game and has a chance for a lot of open looks, as teams focus their perimeter defense on Trae Young.

Jabari Parker started just 17/39 games for the Chicago Bulls and 0/25 for the Washington Wizards. He will likely come off the bench for John Collins and he will be competing with rookie De’Andre Hunter for minutes.

Kemba Walker finds himself on a truly competitive team with a great head coach. He also joins a locker rooms that seems to have had the toxic players removed.

Daniel Theis has been a solid big man off of the bench for the Celtics. However, the likes of Robert Williams III and Grant Williams will put pressure on Theis to perform this season. Theis will likely be a change-of-pace power forward for Boston, but it will be more matchup-based rather than talent/potential on Theis’ part.

Jarrett Allen has quickly established himself as the anchor of the defense for the Brooklyn Nets. He averaged 1.5 blocks per game last season and, with DeAndre Jordan to mentor him, he could look to average double-digit rebounds per game.

Wilson Chandler was signed by the Nets to serve as a savvy veteran while Kevin Durant recovers from his achilles surgery. Chandler has been on the decline since he turned 30 and is suspended for the first 25 games for violating the NBA’s drug policy.

Malik Monk will likely make his first career start in the opening game for the Hornets after coming off the bench for just 17 minutes per game. Monk has the potential to be a solid three-point shooter and shows a lot of upside, as he doesn’t turn 22 years old until February.

Terry Rozier will be the starting point guard for the Hornets after signing a $56.7M contract. However, he shot just 38% from the field last season and averaged just nine points per game in 22 minutes. Pretend he didn’t play extremely well in the playoffs two years ago and you start to realize Rozier is overrated and may not be worth what he will be making.

LaVine is coming off of a career year after averaging 23.7 points, 4.7 assists, and four rebounds per game last season. At 24 years old and entering his prime, LaVine could be in line to make the All-Star team this year.

Valentine missed all of last season after undergoing ankle surgery. The Bulls also signed Thaddeus Young to join Otto Porter Jr., so Valentine will see fewer minutes despite being healthy going into the season.

Cedi Osman saw a decent amount of success with the Cavaliers as a starter, putting up 13ppg in 22 minutes per game. His took his game to another level with Turkey in the FIBA World Cup, scoring 20 points per game. Osman is just 23 years old and has the makings to be a solid player this year.

The Cavaliers spent the fifth overall pick in the 2019 NBA Draft on Darius Garland after using eighth overall in 2018 to take Sexton. Sexton may have the makings of a useful scoring guard, but his defense makes him borderline unusable. Garland may be a more permanent solution for the point guard position and Sexton may be the Cavaliers sixth man by the end of the season.

Luke Kennard has been one of the better NBA three-point shooters and has converted on 40% of his attempts in his young career. Kennard put up a surprising, and unprecedented, 21.4 points per game against the Milwaukee Bucks in the playoffs and hit 60% of his three-point attempts. Those numbers are likely unsustainable for Kennard, but perhaps they mark him turning a corner at 22.

The Pistons made an effort to stock up on solid depth players, such as Markieff Morris and Joe Johnson. Derrick Rose will be the sixth man of the team, which could result in a decrease in usage for Reggie Jackson, who hasn’t averaged more than 16 points per game since the 2015-16 season.

As of right now, there is no timetable for Victor Oladipo’s return. This leaves the point guard position for Indiana with Malcolm Brogdon starting and T.J. McConnell off of the bench. Brogdon has been one of the most efficient players in the NBA and shot 50.5% from the field last season. He may not be flashy, but he will hold down the production from the point guard position until Oladipo can return.

Despite a career-high 2.7 blocks per game last season, Myles Turner finds himself without the extremely underrated Thaddeus Young to help plug up the paint. I foresee Turner struggling without Oladipo in the mix to keep defenses guessing.

With Hassan Whiteside now on the Portland Trail Blazers, the Miami Heat can build their team around both Jimmy Butler and Bam Adebayo. In just 23 minutes per game, Adebayo was still able to post 8.9 ppg and 7.3 rpg. Look for a big year from him.

The Eastern Conference is even more wide open with the departure of yet another superstar to the Western Conference (Kawhi Leonard). Giannis Antetokounmpo’s stock as a player goes up and his odds of winning the MVP by beating up the rest of the East goes up as well. The Bucks should be considered the favorite to win the conference and Giannis will be in MVP conversations yet again.

Brook Lopez shocked everyone in the postseason by showing off his three-point range. However, Lopez looked awful in his limited minutes for the United States, as he played just seven minutes and shot 15.8% from three-point range. With twin brother Robin joining the team, the Bucks may rest Brook Lopez against the more physical big men in the league.

Many are excited to see R.J. Barrett’s NBA debut, but Ntilinkina could look to be a defensive menace. Ntilikina had a good outing in the FIBA World Cup for France and averaged eight points and one steal per game.

Taj Gibson started 57/70 games for the New York Knicks last season. However, he joins a squad with the likes of Julius Randle and Bobby Portis already listed at the power forward position. At 34 years old, Gibson may be relegated to a mentor role.

Jonathan Isaac took a big step forward from both a health and playing standpoint. He averaged more points, assists and rebounds in year two compared to year one. He also saw seven more minutes per game (from 19 in his rookie year to 26). I expect his minutes, and production, to increase once again in 2019-20.

Bamba is still easing his way back fully from the stress fracture in his leg. With injuries like these to big men, his workload is likely to be heavily-monitored throughout the season.

Simmons has been working on his jumpshot all offseason and, if it can come together during the NBA season, he may be an absolute nightmare for teams given the skill set he already offers. Simmons will also benefit from the addition of Al Horford, who is known around the league as one of the best pick-and-roll big men.

Don’t get me wrong, Josh Richardson has a lot of upside. However, the 76ers offense has a lot of mouths to feed, with Simmons, Hoford and Embiid. Richardson will have the ability to sit back and focus on his play around the perimeter.

Siakam had a stellar postseason in 2019. He started all 24 games for the Raptors and averaged 19 points per game. At 25 years old, Siakam will perhaps be the most exciting player to watch on the Raptors this year, and it will be interesting to see how the Raptors do as they run it back with everyone except for NBA Finals MVP Kawhi Leonard.

The former jolt of offense for the Pistons will be the day one starter for the Washington Wizards, while John Wall recovers from a ruptured achilles tendon and Isaiah Thomas recovers from thumb surgery. Smith may be 31 years old, but he displayed tremendous speed last season and will get his first start since the 2017-18 season.

Isaiah Thomas recently underwent thumb surgery that will keep him off of the court for six weeks. Some may do the math and say his injury won’t be a problem because his surgery took place six weeks before the NBA season begins anyway. However, missing an entire training camp and preseason to build chemistry with teammates will hinder Thomas for a chunk of games early this fall.