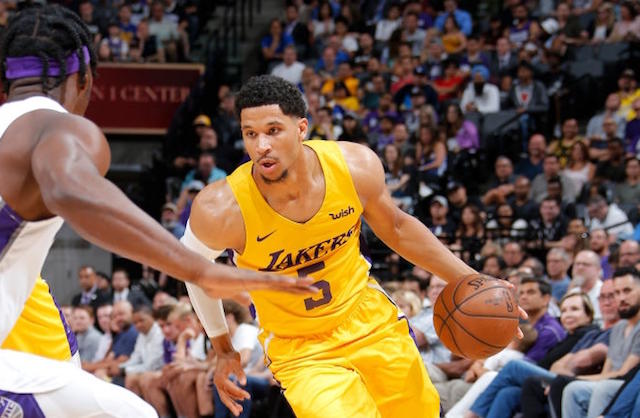 Not the most offensive game we’ve seen this Summer League, but this matchup could have been worse. Each team has some interesting players on their summer squads: Lakers with Moritz Wagner and Josh Hart, while the Bulls have Wendell Carter Jr., Chandler Hutchison, and Antonio Blakeney. This game fell in favor of the Lakers thanks to a big day from Josh Hart. Lakers won the game 69-60 by forcing 18 turnovers and only having 8 of their own.

Hart Proving to be a Key Role Player

If it wasn’t for Josh Hart and his range, the Lakers may not have broken 60 on Sunday night. His 19 points, 6 rebounds, and 3 assists definitely bring him to the performer of the game. His shooting was streaky from the field, but his 4-of-7 from range was vital. Hart was a quality player off the bench this past season for the Lakers. Let’s see if Hart can do more this season.

Moritz Wagner was a bit of a disappointment in this game, scoring only eight points on 4-15 from the floor. Also, he was unable to get anything going from deep, as he was 0-for-4. Although scoring was not his strength in this game, he was able to out-rebound Wendell Carter Jr. by bringing in 14 rebounds. It’s worth noting that Wagner also had 3 steals and 2 blocks. It was Svi Mykhailiuk that was the other scoring option. Svi had 15 points and shot 50% for the night.

Where Did Chicago’s Studs Go?

After strong debuts by these young Bulls, Chicago’s studs fell hard. Antonio Blakeney, who had 25 points in the last game, only managed to score 5 points. Chicago did have him play shooting guard this time around, but that is still no excuse to go 2-15 from the field. Also, Chandler Hutchison scored only 7 points on 30% shooting. It should be mentioned that he at least produced on the boards, grabbing 8 rebounds on the night. Lastly, Wendell Carter Jr. was an absolute force in his debut, but in this game, he was barely noticeable on offense. He finished with 9 points and only shot the ball 5 times. He was also out-rebounded by Moritz Wagner 8-14. At least, Carter did have 4 blocks on the night, proving he can still protect the basket even when he struggles offensively.