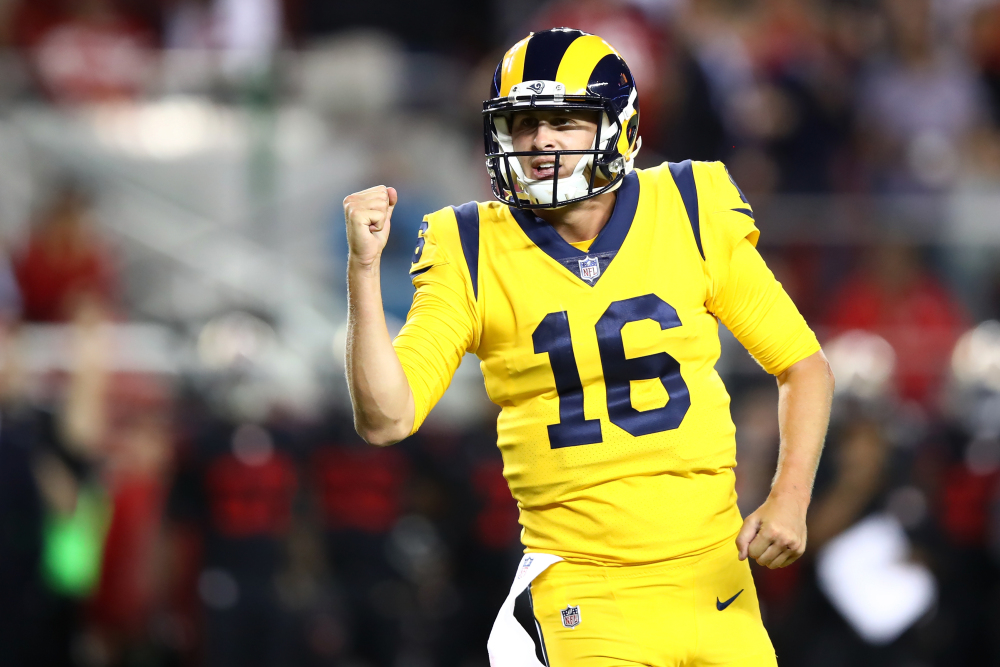 Heading into Week 2, we’re all overreacting here. There isn’t much film to go off, so don’t be crazy with your lineup decisions this week. It’s okay to make bold calls, but for the most part, trust your draft strategy. You took who you took for a reason, so try to stick with that unless you have a good reason not to. Of course, there are some players who you may be justified in overreacting on. This Start/Sit is a little mix of early overreactions and advice on players to stand pat on.

It was ugly. Goff did not look good last week, but his night would’ve looked a lot more palatable had Malcolm Brown of all people not scored two touchdowns from inside 5 yards. Todd Gurley owners were probably the most justified in their panic, but plenty of Goff owners, myself included, quickly started to sour on who they thought could be their weekly starter. But give it another week. Let Goff go back home and take on a Saints defense that showed plenty of cracks against the Texans and give it another shot with his elite offensive weapons. Don’t forget how good he was last year so soon.

I didn’t like him at all against the Patriots last week, and he didn’t look good at all. He looked like a quarterback who was getting old and who didn’t have his best receiver anymore, going up against a top-5 defense in the league. That being said, getting to go home and host the Seahawks is a far more comfortable matchup than the Patriots. Unlike the Patriots, the Seahawks don’t have the means of taking Juju Smith-Schuster out of the game, and the Steelers look like a team that desperately needs Juju in order to get the offense moving. Andy Dalton just looked strong against the Seattle defense, so Big Ben might take advantage of the matchup and get the passing offense in gear.

Didn’t we just do this? I know, I just told you to sit him last week and he proved me wrong. But let’s wait just one more week while Kyler travels east and faces off against the Ravens defense. A game between Lamar Jackson and Kyler Murray could be the game of the week, but it could also turn ugly in a hurry. If Kyler balls out this week, then you have my overdue blessing to get him in your lineup for the rest of the year. Right now I want to wait just one more game.

I’m not so sure Russell Wilson is a starting fantasy QB anymore in this offense. He threw for under 200 yards against the Bengals, attempting only 20 passes, while rushing for only 8 yards. Once again, the Seahawks rushed more than they passed, and with the utter lack of receiving weapons Seattle has, this is going to once again be the norm. He’s still a top-5 quarterback in football, but the offense isn’t going to be potent enough to make Wilson a great fantasy play. The Steelers might be a fine defensive matchup, but in the early weeks I’m sometimes just going to use this section to make sure you aren’t relying too much on the wrong people.

As unwatchable as the Patriots generally are when they travel to Miami, this season might be the exception. The Patriots might have the best offense they’ve had in years, and they now get the luxury of taking on a Dolphins team that began its mutiny before the season even began. Let this section be my way of telling you to start every Patriot you have this week. Sony Michel will get past his Week 1 struggles, and James White proved that he’s still very much a central part of this offense. Both should be good RB2s or Flex players most weeks, and especially this week.

Are you ready to do it? I think I am. Any Chief that gets double digit touches is a starter in my book, and it doesn’t take much for me to buy back in on Shady McCoy. Going up against the Raiders is a great bonus, and should mean plenty of running for both McCoy and Damien Williams, who you should also be playing, needless to say.

Facing the Bears’ defense is a miserable experience for everyone, and the Broncos’ offense is not nearly special enough to justify forcing Lindsay into your offense if you don’t have to. He’s a great player and he should be in for a nice season but keep him and every other Bronco out of your lineup if you can.

Singletary looked excellent in his first career game, but the fact remains that he only carried the ball 4 times. His 5 receptions bode well for the future, but for now Frank Gore remains ahead of him on the depth chart, so best case scenario Singletary splits snaps on a Bills offense that isn’t particularly encouraging. Hold onto Singletary, but don’t jump the gun and start him yet, even against a Giants defense that was just thoroughly dismantled by the Cowboys. The Bills are not the Cowboys.

Get him in there and keep him in there. Tyrell Williams might be the surprise player that jumps into the WR1 tier this season, because Derek Carr is targeting him often, and deep down the field. The Chiefs aren’t a scary matchup, other than the fact that they’ll probably blow the Raiders out in real life, so Williams is going to be force fed for another game like he had a week ago.

Seeing Desean Jackson catch 50 yard touchdowns for the Eagles took me back, man. Back to the good old days when he wasn’t being wasted on the Buccaneers and Redskins. If Carson Wentz continues to take advantage of Jackson like he did in Week 1, he’s a player that should never leave your lineup. You’ll have to suffer through disappointing weeks, but that’s just the cost of doing business with Jackson. When he has his 154/2 games, you’ll remember why you signed up for this. The Falcons allowed the 6th most passing yards and the 4th most passing touchdowns last year. Get him in there for Week 2.

This is a continuation of my telling you to sit this one out when it comes to the Cardinals’ passing offense. Teams tend not to do well when they travel east, and Kyler Murray, who got a very slow start against the Lions, may have a hard time getting his footing in this one against one of the league’s best defenses. Fitzgerald and Kirk may be solid starters this year, but not this week.

Maybe Gardner Minshew can take control of this Jaguars offense and nothing will change, maybe not. I’m not saying to lose all hope in the Jags’ passing offense, but Minshew and Westbrook likely haven’t practiced very much together, and with just a week to prepare for the Texans’ cornerback duo of Jonathan Joseph and Bradley Roby, I’m not buying in on Westbrook this week.

Derek Carr really had some chemistry with his receivers in Week 1, connecting on 84.6% of his passes, and Waller led the Raiders in both targets and receptions. All the hype built up over the offseason by ‘Hard Knocks’ seems to have come true early on, and no matchup is going to be better for a budding star than the Chiefs. The Chiefs finished bottom 5 in receptions, yards, and touchdowns allowed to tight ends in 2018, so do whatever you can to get Waller in your lineups this week, and possibly for the foreseeable future.

You can already tell that T.J. Hockenson’s usage this season could be historic for a rookie tight end. He almost received double-digit targets in his first career game, and he turned them into 131 yards and a touchdown. This is not going to be Eric Ebron 2.0; Hockenson is a good play against the Chargers, and you can add him to the growing list of start-worthy tight ends…

…and you can take Ebron off that list. I said to just wait until we’ve seen it on the field, well now we’ve seen it on the field. You can drop Eric Ebron, and you definitely shouldn’t be starting him this week against the Titans, who do a good job when they aren’t facing elite tight ends. I don’t endorse playing Jack Doyle this week either, or Mo Alie-Cox for that matter.

We went into the season thinking Njoku would be a TD-or-bust type TE and a borderline starter, and so far that’s exactly what he is. His touchdown salvaged an otherwise forgettable game, and the Jets should pose a difficult matchup. No team allowed fewer TE receptions in 2018 than the Jets, so for a player on a team where receptions are already difficult to come by, I’m not feeling it with Njoku this week.