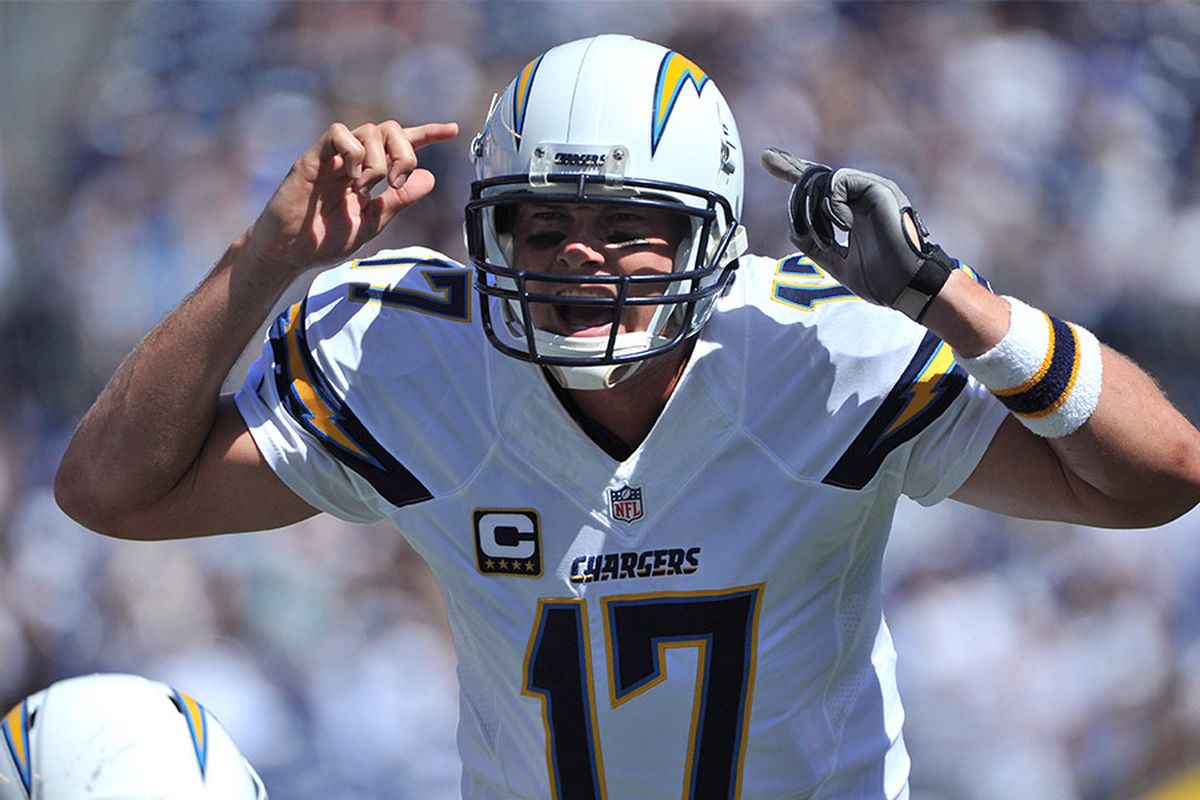 The football season refuses to stop flying by so alarmingly fast, so here we are, already gearing up for another week of both the NFL and fantasy season. You’re here for the latter, so before the week kicks off tonight, let’s get down to it and take a look at which players could be decent fringe starts or sits this week. You guys get it. It’s Week 10. We’ve got a rhythm going at this point.

After finally resurfacing from a gauntlet of punishing fantasy matchups, Rivers can finally see your starting lineup against Oakland, who are just a little off the Cardinals’ pace in the race for worst defense against QBs. To sweeten the pot, Rivers is almost always successful against the Raiders. In his last four seasons against Oakland, Rivers is averaging approximately 300 passing yards per game, and there have only been two games in that span in which he didn’t throw for multiple scores. He’s also managed at least one touchdown pass in every Raiders game since 2007. He’s usable again.

At the risk of sounding a bit obvious, the one defense worse than the Raiders is also a prime matchup to exploit this week. I’ve been on record about how I don’t and will never trust Winston as a QB, fantasy or otherwise, but in the short term, it’s impossible to ignore the connection he has with Mike Evans right now. This game couldn’t be coming at a better time for the Buccaneers, because while Winston is bound to eventually come crashing down to earth in a great ball of fire, it would be a surprise if this was the week.

While Cousins has been giving fantasy owners almost nothing but excellent performances lately, it’s impossible not to note the defenses he’s been so successful against. The Giants, Eagles, Lions, Redskins and Chiefs can give any QB a good day, and while I’m not completely writing off Cousins’ turnaround, I’m going to fade him in his first real test in a long time. The Cowboys have a tough defense, which actually ranks in the top-five against QBs.

Goff actually wrapped up the first half of his disappointing fourth season with two dominant games, but again, there’s only so much stock you can put in a couple drubbings of the Falcons and Bengals. Goff is coming off a bye, for those looking for hope, but he gets a tough draw with Pittsburgh this week. The Steelers may not be in the “avoid at all costs” tier, they can still pose a tough test and they give me pause when the quarterback in question still has something to prove in my eyes. Goff has definitely started to turn his season around, but with so many QB1s coming back this week, you should have better options out there.

After getting 20 productive touches, while significantly out touching and outplaying Frank Gore against Washington, Singletary Season is finally here, and it’s time to start getting him in your lineups. A date with the bottom-10 Browns fantasy defense against running backs gives you every reason to trust Singletary this week.

Too touchdown dependent for you? Fair enough. I’m not going to blame you if you aren’t buying his surge in recent weeks, but Williams has scored five times in his last four games, and now gets to face the Panthers, who have allowed the most rushing touchdowns all year, to go along with the highest average yards per carry allowed. If there was ever a defense against which to start a running back that typically gets single-digit touches, it would be the Panthers.

Of course, this is really just for those who can spare to bench him, which not everyone can, but Freeman, who hasn’t been particularly efficient this year anyway, might not get much at all going against New Orleans, who can sometimes force teams to abandon the run entirely. His volume makes him a flex option any week, but if you have the firepower, don’t feel too bad about taking this week off.

This one applies to everyone. The Bengals are moving on from Andy Dalton to Ryan Finley, as they look to face Lamar Jackson and the Baltimore Ravens. It’s fair to say that if the Bengals aren’t completely blown out of the building it will be a surprise, which is rarely good news for a running back. AJ Green is coming back, which could give the offense a boost, but until we see whether Finley can move the ball or not, no Bengal is a good start.

Since Week 5, Williams has only had one game with fewer than 69 receiving yards. He’s quietly putting a pretty nice season together for the Chargers, other than the fact that he has yet to catch a touchdown pass this season. With Keenan Allen’s continued struggles, Williams has begun taking up a larger share of the offense, with last week’s defeat of Green Bay being his first 100-yard contest. With Philip Rivers set to bounce back against the Raiders, this could be the start of something big for Williams, and hopefully Allen too.

No, his 8-yard effort against San Francisco wasn’t his brightest moment, but keep in mind that a) it was against the Niners and b) he was banged up coming off a short week. Kirk isn’t having quite the fantasy breakout we may have hoped for, but it isn’t too late to get things going in earnest against that famously terrible Buccaneers secondary. Kliff Kingsbury won’t let Kirk’s potential go untapped twice in a row.

The big question here is Ryan Finley. If Andy Dalton was still playing QB then I wouldn’t hesitate to put AJ Green into my lineup, after keeping him on my bench for the first 9 weeks of the season. Now that another variable has entered the equation, there’s too much risk here for me against the Baltimore defense. Boyd was effective as a #2 for Green last season, but he doesn’t have a very high ceiling in this offense. He could get peppered for a number of short receptions in this game though, if you’re looking for a player with a decent floor.

I should have written this a long time ago. Despite Watkins’ presence and role in the Chiefs’ offense, his fantasy value isn’t in the WR2, or even the WR3, territory. He might be capable of having games like the one he had in Week 1, but it’s foolhardy to continue keeping him in your lineup in the hopes that that game will come. Watkins hasn’t scored a touchdown since that game in Week 1, and now faces the capable Titans secondary. Patrick Mahomes’ return is obviously huge for the Chiefs’ offense, but Watkins rarely has any substantial success with any quarterback.

Jason Witten’s return to the game is surprisingly resulting in a remarkable season for a 37 year old tight end. Witten is currently TE10 on the season, and he hasn’t caught fewer than 3 passes yet in any game. He’s about as steady as it gets; he’ll generally give you between 7 and 13 PPR points in each game, which is a perfectly fine score for the tight end-desperate fantasy owners out there.  The Vikings have only been mediocre against tight ends this year too, just to put some icing on the cake.

No an 18-yard outing against the Panthers doesn’t have anyone rushing out to get Smith, but it was his second straight game of at least 5 targets with Delanie Walker out. With Walker expected to miss another game against Kansas City, Smith is a fine streaming play.

Are people really still starting TJ Hockenson? Just like I said with Sammy Watkins, Week 1 was a long time ago. The Bears have actually been accommodating towards tight ends this year, but I’d like to see Hockenson beat any defense besides the Arizona Cardinals before I consider starting him again.

Really no Packers receiver outside of Davante Adams has proven worth starting, with the team’s running backs carrying a huge percentage of the team’s offensive load. Graham has been no exception, with only two games above 41 yards all season. He’s an occasional touchdown threat, but with Adams returning and the running backs scoring so often, he’s less of a threat than ever, especially with the Panthers being so successful against tight ends.