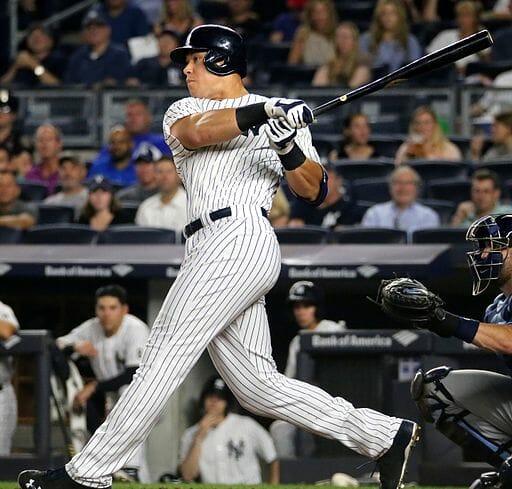 The Home Run Derby is one of the most amazing spectacles in all of sports. To see some of the best baseball players crush long ball after long ball is incredible to watch. It is an event truly for the fan, and nothing is better than seeing a player from your favorite team in the Derby, right? Maybe not.

The participants for this year’s derby are Aaron Judge, Gary Sanchez, Mike Moustakas, and Miguel Sano from the American League and Giancarlo Stanton, Justin Bour, Cody Bellinger, and Charlie Blackmon from the National League. Each of these players have put up strong numbers so far this year. However, don’t expect their big numbers to continue.

Comparison to Other Power Hitters

Taken from power hitters who did not participate in the Home Run Derby, the comparison between Home Run Derby contestants and non-Home Run Derby contestants shows that the decrease in power and average isn’t typical among those who didn’t swing for the fences during the All-Star break. The at bats per home run average over the last five years went from 14.9 before the break to 14.3 after the break, roughly the same. The non-participants improved on their number of at bats per home run in three of the five seasons, including large improvement the last two years.

Batting average tells the same story as well. The batting average over the five years for non-participants raised from .277 to .278, again staying about the same. Power hitters who don’t do the derby have improved their batting average after the break every year.

Comparison of Home Runs per Year

Although the Derby is an exciting piece of baseball, it may be better served if your favorite player sits it out. The new format makes it fun and exciting. However, I’m not sure it is best for the players. If your team is still competitive, hopefully you don’t have a star competing in this year’s show. I don’t know why those who participate have decreasing numbers. Maybe they should take a rest and try to figure it out.

MLB Top-5: Pretenders or Contenders?
Will the Dodgers Rise to the Occasion?