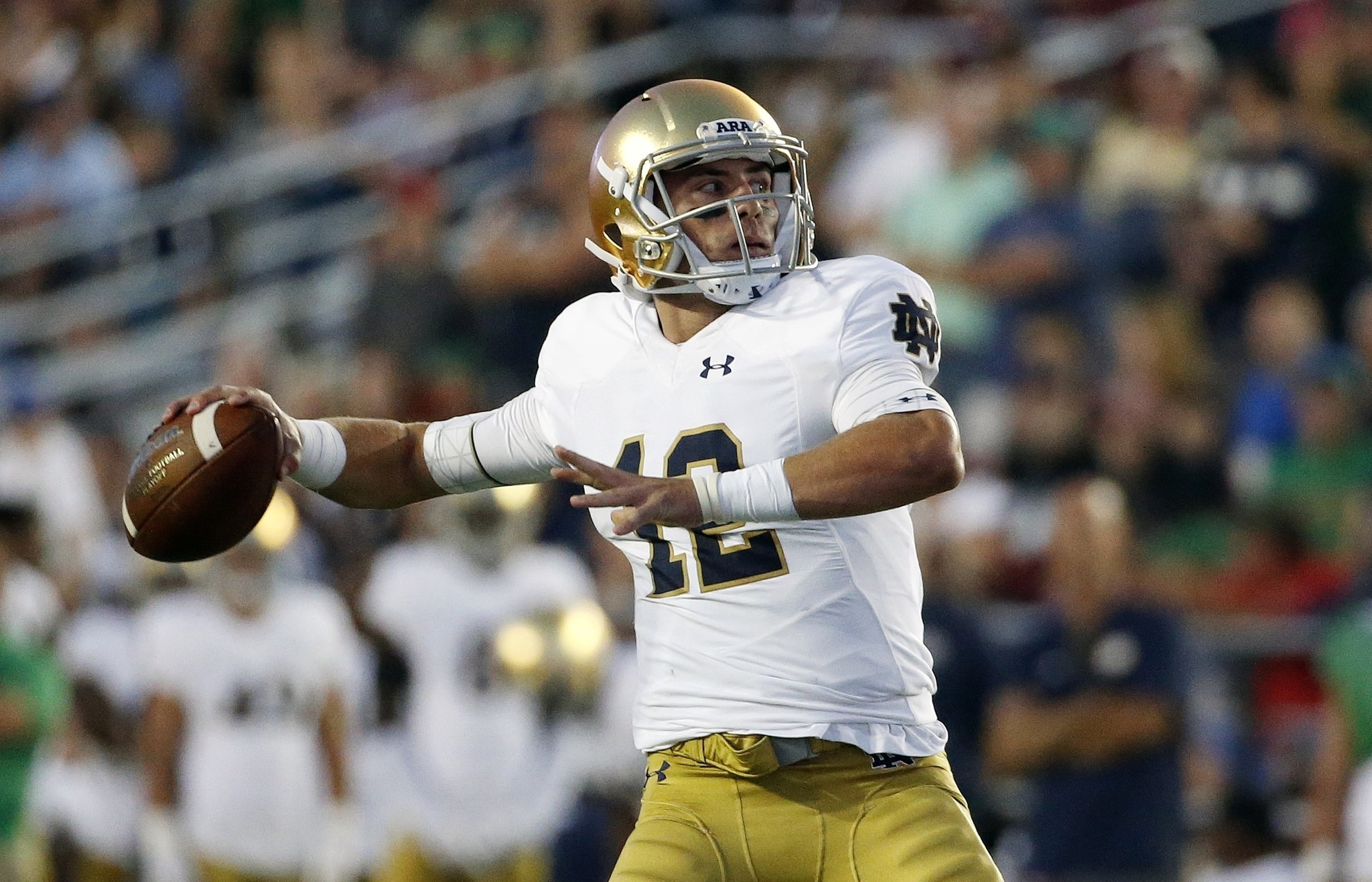 Washington has responded well the past few weeks, after their season opening loss to Auburn.  The Huskies have reeled off four straight wins, including last weekend’s 35-7 victory over formerly ranked BYU.  While Washington has been winning of late, the offense hasn’t been as dominant as we’ve grown accustomed to.  After averaging 36 points per game just a season ago, the Huskies offense has only managed to put up 28 points per game this year (24 points if you exclude the 45-3 week 2 victory over North Dakota).  Luckily for Jake Browning and the offense, they haven’t needed to put up many points this year, as the D has been phenomenal.  Not only is the Huskies defense top-10 in total yardage surrendered, they are also the number one scoring defense in the nation, allowing a staggering 11.6 points per game.  Granted, it’s only week 5 and a lot can change between now and the end of the season, but with a defense like this, Washington will be able to keep themselves in games, even when their offense isn’t lighting up the scoreboard.  Washington travels to UCLA to face the winless Bruins and first year head coach Chip Kelly this week.

Sticking with the theme of struggling offenses, the Auburn Tigers have had their fair share of troubles on that side of the ball.  After beating Washington to start the year, Auburn was stunned at home by LSU in week three, losing on the last play of regulation as LSU hit a game-winning field goal to cement the upset.  One surprising element of that performance was Auburn’s inability to consistently move the ball on offense. Many, like myself, attributed this to LSU having maybe the best defense in the country, but that doesn’t explain why Auburn struggled this week against Southern Miss.  Of Auburn’s four first quarter drives, they were forced into three 3-and-outs and scored only one touchdown.  Auburn continued to have difficulty moving the ball in the second half, as they were forced to punt on 3-of-7 drives, fumbled on one, and missed a field goal on another.  Much like Washington, Auburn will need to rediscover their magic on the offensive side as the season goes on.  Auburn travels to Starkville, Mississippi this week to face the Mississippi State Bulldogs.

Penn State nearly outlasted the Buckeyes at home on Saturday, but in the end, Ohio State proved to be too much for the Nittany Lions.  After taking a 26-14 lead almost halfway through the fourth quarter, Penn State failed a two point attempt to push the lead to 14. Ohio State responded by scoring 13 points in the final eight minutes to narrowly escape Happy Valley with the victory.  Not lost in the defeat, however, was the performance of senior QB Trace McSorley.  In an otherwise gloomy night, McSorley was sensational for the Nittany Lions, not only throwing for 286 yards and two touchdowns, but also running the ball 25 times for 175 yards. Both numbers were game highs for either team.  Look for them to bounce back in a big way this weekend at home against Michigan State.  If nothing else, McSorley should be fun to watch.

After back-to-back weeks of lackluster performances, the Sooners got back to their dominant ways against Baylor.  The Sooner defense gave up more points than they should have, but these are the luxuries of having an offense that puts up 66 points.  Scoring touchdowns on 9-of-13 drives in the game, Oklahoma showed why they were preseason favorites for many this year.  However, Oklahoma’s issue this year has not been their inability to flash excellence, but rather the inconsistent way they play on a week-to-week basis.  In five weeks this year, the Sooners have been disappointing in two of those weeks–a 10-point win against Iowa State and a seven-point overtime victory over Army.  Whatever the reason for their up and down play, Oklahoma can’t afford to have another down performance this week, as they head to the Cotton Bowl for the Red River Shootout against rival Texas.

What a week it has been for the Clemson Tigers.  After defeating Georgia Tech a week ago, Clemson subsequently named freshman Trevor Lawrence their starting QB, a move that was not taken lightly by fellow QB Kelly Bryant, who immediately announced his intention to transfer from the University.  Fast forward to this past Saturday, after falling behind Syracuse late in the first half, matters were made worse when Trevor Lawrence was knocked out of the game after a hard hit during a scramble.  With no Kelly Bryant to fall back on, the Tigers had to rely on freshman Chase Brice for the rest of the game.  It took Brice a couple drives to settle in, but he eventually settled down enough to lead Clemson to victory in comeback fashion.  While you could try to blame Clemson’s woes on injury and inexperienced QB play, that doesn’t explain why Clemson trailed with their starter on the field in the first half.  Perhaps it is time for those of us who thought Clemson was National Title worthy this year to admit they just aren’t who we thought they were this year.  Clemson travels to Wake Forest to face the Demon Deacons on Saturday.

Notre Dame has easily been one of the most impressive teams in the country the last two weeks.  After struggling the first three weeks of the season, Notre Dame made the change at QB to start Ian Book last week against Wake Forest and he did not disappoint.  This week against Stanford, it was more of the same from Book, throwing for 278 yards and 4 touchdowns on the night.  Another bright spot to the Notre Dame offense was the return of suspended running back Dexter Williams.  Williams returned to action and played as though he hadn’t missed a snap, running for 161 yards on 21 carries and adding one touchdown for good measure.  Not to be outdone by the offense, the Irish defense also stepped up in a big way, especially in crunch time.  Holding on to a 24-17 lead entering the fourth quarter, the Notre Dame defense held Stanford to -23 yards in 7 plays and forced one interception, as they closed out the victory, 38-17.  It’s only been two weeks, but Notre Dame has shown with their new look offense, they are not only a threat to those remaining on their schedule, but they’re also a threat to find their way into the Playoff.  Notre Dame travels to Blacksburg, Virginia to face Virginia Tech this Saturday.

LSU is apparently no longer feeling the effects of the hangover it suffered a week ago.  The Tigers responded in a big way against the Rebels of Ole Miss in a 45-16 rout in Death Valley.  LSU was impressive in every facet of the game.  Defensively, the Tigers shut down a dynamic playmaker at QB in Jordan Ta’amu, holding him to 178 yards through the air and no touchdowns, even picking him off once.  Maybe even more impressive than the defense was the play of quarterback Joe Burrow.  Burrow did it all Saturday night, posting an impressive stat line of passing for 292 yards and 3 touchdowns and rushing for another 96 yards and a touchdown.  LSU will need to continue getting better and better every week as they travel to The Swamp this week to square off against the Florida Gators.

The Bulldogs made quick work of the Volunteers this week by utilizing a little old school, ground and pound football.  Rushing for 251 yards and 5 touchdowns, Georgia imposed their will early and often against Tennessee on their way to a 38-12 victory to remain undefeated.  Georgia also got a fantastic performance from its defense, shutting out Tennessee in the first half.  In fact, the game was in the third quarter when the Volunteers crossed the 50 for the first time.  The Bulldogs have yet to truly be challenged this year, however that wont be true for much longer.  After a game against Vandy this week, the Bulldogs have four straight games against teams currently ranked in the AP Top-25 (at #5 LSU, #22 Florida, at #13 Kentucky, #8 Auburn).  It is an absolutely brutal stretch, but one that, should Georgia make it through unscathed, would solidify them as a playoff favorite late in the year.

Ohio State has two impressive victories this year, both of which were won in comeback fashion.  After beating TCU in what was basically a home game for TCU at Jerry World, the Buckeyes traveled to Happy Valley to face one of the hottest teams and one of the hottest players in the country.  Much like in the TCU game, the Buckeyes found themselves down late in the game, but also like the TCU game, the Buckeyes were able to claw their way back to a lead they would never relinquish.  It is a little troubling the way Ohio State finds themselves behind in these close games, but is is equally, if not more, encouraging how they always find a way to battle back and win these tight games.  I wouldn’t expect to see any more close games any time soon though, Ohio State begins a relatively easy stretch in their schedule, with the Hoosiers of Indiana this weekend at home.

Does this ranking really need any more justification at this point?  Alabama is, quite simply, bigger and badder than everyone else in the nation right now.  Saying anything else at this point would be overthinking it.  Bama gets Arkansas this week in what some experts are calling a “trap game.”  Here’s a hint: Give up the points, take Alabama -34.5, that’s an absolute lock.