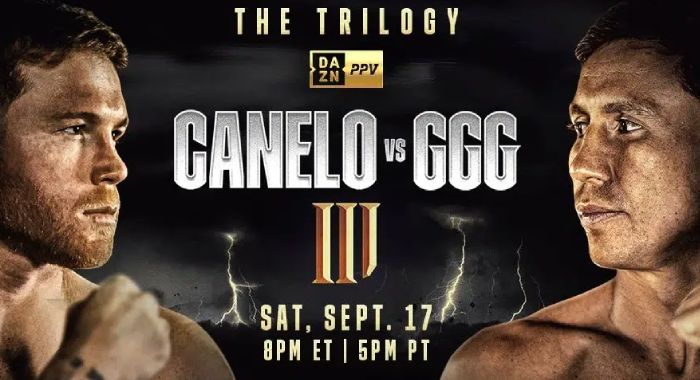 The number one platform we recommend for a Canelo vs GGG live stream is DAZN. These guys now cover all major boxing fights in the USA, and this bout is one of them. You can already join DAZN ahead of the fight too. Note that a standard DAZN subscription costs $19.99, and this package already grants access to a ton of great fights. However, it’s important to note that the Canelo vs GGG PPV contest requires payment – no matter what streaming provider you look at.

And this contest is not covered in the standard DAZN subscription service. This is common for pay-per-view events, and to gain access to Canelo vs GGG you will have to pay the one-off fee of $64.99. This is actually the joint cheapest of any streaming provider in the USA. And although the fee may seem steep, DAZN offers phenomenal streaming quality. You can also access the streaming service through mobile. This can be done by downloading the DAZN mobile app, which is available for both iOS and Android. Once installed, you will be able to enjoy Canelo vs. GGG 3 on either your smartphone or tablet, both in HD quality.

Another great thing about DAZN is that since it is a subscription service, you can always cancel it after the fight – that’s if you decide that you don’t want to continue with their services. But since DAZN does cover other boxing fights, some for free and some with an extra charge, we believe that it is worth keeping.

This is the third installment of Canelo vs GGG. And like all great trilogies seen in boxing over the years, the third bout has a ton on the line for both guys. Of course, the previous two fights have been shrouded in controversy. One of the fights led to a surprise draw, and the other led to a hotly contested Canelo victory. But many fans are hoping that the third installment here will settle things once and for all. As a reminder, the fight will take place on Saturday, September 17th in Las Vegas – like all great boxing fights.

In terms of which way the fight might swing, many believe that Canelo has got this in the bag against his 40-year-old opponent. And it would seem that the bookmakers agree, with many favoring Canelo at odds of -410. With that said, GGG has some serious skill and power, so this has the potential to be a thrilling fight whatever happens.

How much is Canelo Vs GGG 3 PPV cost?

Boxing fans in the UK can stream the whole event live on DAZN. All they need to do is to avail the monthly subscription and they are good to go. The streaming service costs £7.99 per month to British nationals.

But for the fans located in the USA, Canada, UK, Ireland, Australia, and New Zealand, they will have to buy PPV along with the monthly subscription to watch this event live.

What sportsbooks have the best odds for Canelo vs. GGG 3?

What channel is Canelo vs GGG on?

Canelo vs GGG is not on a mainstream channel. You will have to purchase a subscription to Sling TV or DAZN to gain access.

Should I explore a Canelo vs GGG free live stream instead?

We recommend that you do not look for a free live stream for this fight. That’s because websites that are offering free streaming are illegal. And by visiting such sites you may expose yourself to unwanted hacks.

What payment options do I have for the Canelo vs GGG streaming providers?

Both Sling TV and DAZN have plenty of methods you can use to pay for the streaming service and the fight. But the main methods you will likely want to use include debit and credit cards.

Until when can I place bets on the Canelo vs GGG fight?

You can bet on the Canelo vs GGG fight right up until the bout begins. But if you want to wait until the fight begins to place some bets, you can do that too. In fact, many punters like to wait to see how the fight plays out before making any wagers.