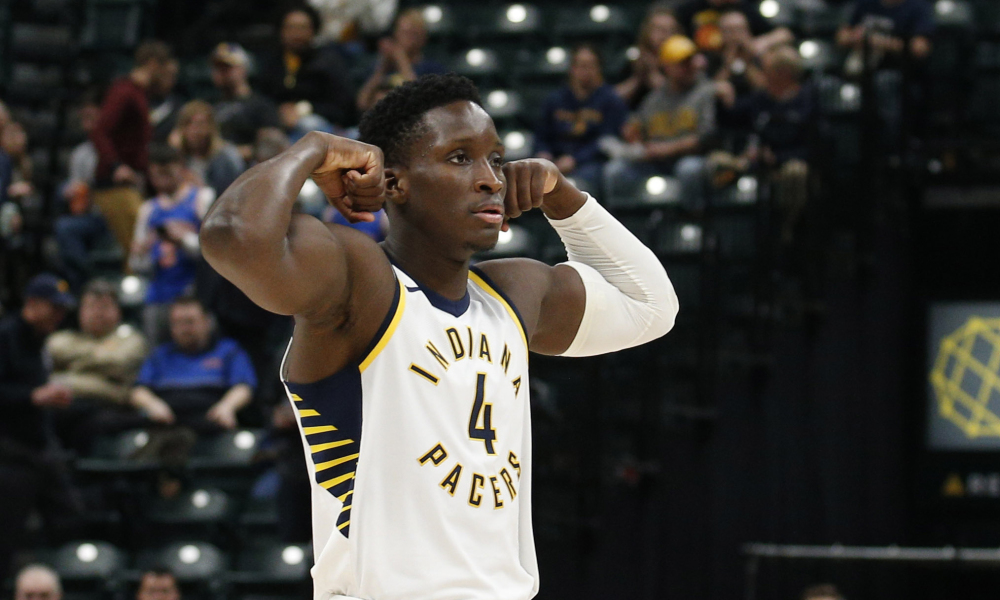 The Indiana Pacers were by far one of the most surprising teams of the NBA season and somehow managed to take LeBron’s Cavaliers to a Game 7 in the first round. If it wasn’t for Victor Oladipo, this team wouldn’t have come close to making the playoffs. Victor Oladipo was deserving of Most Improved Player of the Year.  Also, Nate McMillan has done an outstanding job in Indiana and looks to be their coach for the future. He was by far one of the best coaches this past year.

Now, back to this Pacers team taking LeBron to a Game 7 and giving him the hardest first-round playoff series of his career. Most games in this series were only separated by four points or less. Other than Games 1 and 6, where the Pacers won both by double digits in convincing fashion. The Pacers were clearly the better overall team than Cleveland, but the Cavs have LeBron, and that made all the difference in the world. It was impressive to see this inexperienced group of young players battle this Cavs team night in and night out to take it to a Game 7.

One of the things the Pacers need to understand going into this summer is that they don’t need to try and create a Finals contender in one offseason. Rome wasn’t built in a day. The Pacers need to realize that what they have is something close to being very competitive. They are perhaps one star away from great, and as long as this young team develops their young players in Victor Oladipo, Domantas Sabonis, and Myles Turner, they will have a nice future. They are one of the few teams in this league that are missing only one piece. The key will be to wait and see what they do when they have enough cap space to go after a co-star to go alongside with Oladipo. Otherwise, they will need to make a trade or two if they don’t have cap space.

However, this is not the offseason to do it. The Pacers only have one small contract expiring in Glenn Robinson for $1.5 M. They have three team options in Lance Stephenson ($4.3 M), Domantas Sabonis ($2.7 M), and Joe Young ($1.6 M). They reportedly have declined Stephenson’s option. They have two player options for Thaddeus Young ($13.7 M) and Cory Joseph ($7.9 M). With all but Stephenson likely back, Indiana will not have any cap space to go after an impactful free agent this summer. However, in 2019, almost everyone on the team will have an expiring contract. This would be the season they go after their co-star. They are so close to being great, but they must stay patient.

If Thaddeus Young and/or Cory Joseph do not pick up their options, then I would expect the Pacers to be buyers this offseason. They could use some more wing help, and Tyreke Evans, Rudy Gay, or Trevor Ariza might be interesting options for the Pacers. One of those two players must move on from Indiana if they want any additions in free agency.

The goal for this summer would be to develop their players and create some more chemistry with the young stars. They should also try and trade Al Jefferson, who only played 36 games this season, but I doubt there will be many of suitors trying to get him. If they do this, then maybe they get a good enough asset to make an impact and help Oladipo on the offensive end. The Pacers may actually cut Jefferson instead and pay his contract throughout the next few years, or pay him out now. What they have in Indiana is perfect for the future. Just don’t blow it, Indiana.

Trades for a Co-Star

Indiana did a great job in the draft last week by getting a potential future point guard in Aaron Holiday. However, Indiana is still one of the best suitors for Kemba Walker. Indiana has been rumored to have interest in the All-Star guard, and he would be a great addition to the backcourt. A Kemba and Oladipo starting rotation would be one of the best in the league. They could just settle for this year and the following summer go for a star point guard in free agency instead of having to trade assets to get one.

Also, Dennis Schroder had an interview a month ago mentioning that he could see himself playing in Indiana. This backcourt is much less intriguing than a Kemba one, but would be better than what they have now. Schroder does not spread the floor at all, which would be the biggest issue for Indiana. However, he is dynamic, quick, and young. Schroder’s contract at the moment is 3-year $46.5 M, which is a borderline bad contract. Whereas Kemba Walker is on a 1-year $12 M contract. I think Indiana will stay put with trades, but exploring these options wouldn’t be the worst idea for Indiana.

How the 76ers can Continue Their Process Towards Winning a Title

2017-18 NBA Awards Results
What Should the Cavs Do if LeBron Leaves?