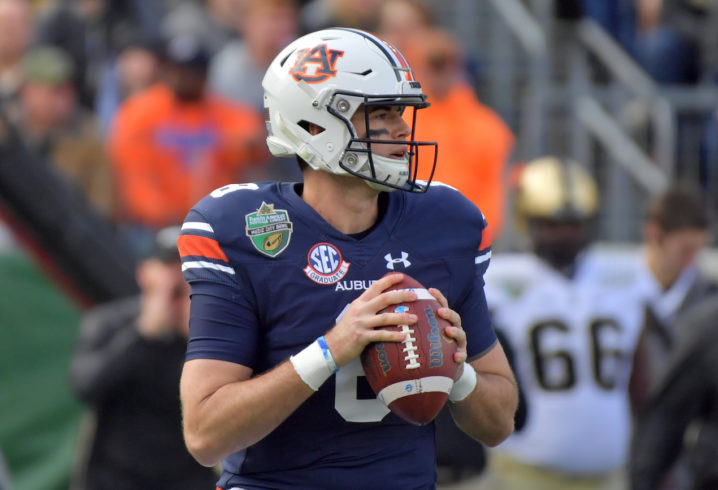 From Nashville to Orlando and down to San Antonio, there was excitement all around in Friday’s college football bowl games. The SEC, ACC, and Pac-12 each picked up a win to bolster their overall bowl standings.

The Auburn Tigers (8-5) did more than just crush the Purdue Boilermakers (6-7) in Friday’s Music City Bowl. They set a bowl record in the process. Auburn’s 8 first half touchdowns broke the record for most points scored in a single half of a bowl game, and the Tigers ran away with a 63-14 victory.

The game was never in doubt, with Auburn leading 21-0 after just eight minutes of play. Purdue had no answers defensively whatsoever and the halftime score ballooned to 56-7 before Gus Malzahn’s crew finally called off the dogs in the second half. Quarterback Jarrett Stidham threw the first of his 5 touchdown passes just over a minute into the game, connecting with JaTarvious Whitlow on a 66-yard play. It was the first of Stidham’s three touchdown passes that went for longer than 50 yards. He also found Darius Slayton on scoring strikes of 74 and 52 yards.

Stidham finished with 373 yards passing. Slayton had as efficient a day as a receiver can have with 3 catches for 160 yards and 3 touchdowns. Whitlow would add 2 rushing touchdowns to the opening receiving score to finish with 3 total on the day. Anthony Schwartz had a rushing touchdown to go along with 50 yards receiving. Kam Martin led the Tigers in rushing with 58 yards. Seth Williams had 55 yards receiving and Ryan Davis caught a touchdown pass.

Despite finishing just a game worse than Auburn in terms of regular season records, Purdue clearly was not on a level playing field. David Blough stumbled his way to 184 yards passing and a rushing touchdown but also had 2 interceptions. The lone bright spot for the Boilermakers was Rondale Moore who finished with a rushing score and 11 receptions for 94 yards.

Reaching the 10-win mark is a real feather in the cap of a college football team’s successful season. Head coach Dino Babers admitted that the Syracuse Orange (10-3) wanted to reach that mark badly. A 17-point fourth quarter blitz erased a 1-point deficit and powered the Orange to the program’s first 10-win season since 2001 and a 34-18 victory over the West Virginia Mountaineers (8-4) in the Camping World Bowl.

The Mountaineers were forced to play without quarterback Will Grier as he sat out the bowl game to prepare for the upcoming NFL Draft. While the offense clearly lost a bit of its edge with Jack Allison making his first collegiate start, West Virginia was able to make a game out of it and held an 18-17 lead through three quarters on a Kennedy McKoy touchdown run and 4 Evan Staley field goals. It was short-lived however as Orange QB Eric Dungey connected with Jackson 6 seconds into the final frame. Syracuse added a field goal and a Jarveon Howard rushing score in the next five minutes to pull away.

The Orange got the best of both worlds in the bowl game, celebrating the past and getting a glimpse of the future. In his final collegiate game, Dungey completed 21 of 30 passes for 303 yards and a touchdown. He passed Ryan Nassib for the most yards in program history in the process, finishing his career at Syracuse with 19 different program records. With an eye toward the future, Syracuse got 3 touchdowns from a pair of players making their debuts. Abdul Adams scored 2 rushing TDs and Trishton Jackson hauled in a touchdown reception. Neither player had to use up a year of eligibility to do so either, thanks to the NCAA’s new redshirt rules.

Allison didn’t throw for a touchdown, but he did have 277 yards and showed the poise necessary to take over the West Virginia QB job next season. McKoy finished with 73 yards rushing. David Sills V capped off his collegiate career with 90 yards on 4 receptions. T.J. Simmons had 6 catches for 64 yards.

Sometimes, you have to hang on and survive to win a bowl game. That was precisely what the Washington State Cougars (11-2) did Friday night in the Alamo Bowl. After building a double-digit lead in the first half, the Cougars stopped a late Iowa State Cyclones’ (8-5) 2-point conversion attempt that would have tied the game to pull out a 28-26 victory.

Mike Leach’s “Air Raid” offense was on full display and it was reflected in the stats of quarterback Gardner Minshew II. 49 pass attempts led to 35 completions for 299 yards and 2 touchdowns. Minshew also ran for a score in the first half as the Cougars took a 21-10 edge into halftime. The Cyclones used a 10-0 third quarter to pull to within one before a Max Borghi 10-yard TD run put Wazzu back up 8 early in the fourth. In need of a touchdown and 2-point conversion, Brock Purdy led Iowa State down the field, capping a 74-yard drive with a 1-yard touchdown run. However, a false start penalty backed up the line of scrimmage for the 2-point try and the attempt was stopped short to preserve the Washington State lead.

Minshew certainly spread his 35 completions around to various targets. Dezmon Patmon and Renard Bell were the recipients of the 2 TD passes. Patmon finished with 6 receptions for 76 yards. James Williams reeled in 7 catches for 53 yards, Easop Winston had 43 yards, and Davontavean Martin and Jamire Calvin each had 35 yards receiving. With Minshew’s collegiate career complete, Leach will need to pinpoint a new quarterback to operate his offense for next season.

Despite 2 interceptions and 22 fewer pass attempts, Purdy actually threw for more yards than Minshew, finishing with 315. He also scored 2 rushing touchdowns. Tailback David Montgomery piled up a touchdown and 124 rushing yards on 26 carries. He added 55 yards receiving for good measure. NFL receiver prospect Hakeem Butler exploded for 192 yards on 9 receptions in what might have been his final game as a Cyclone.