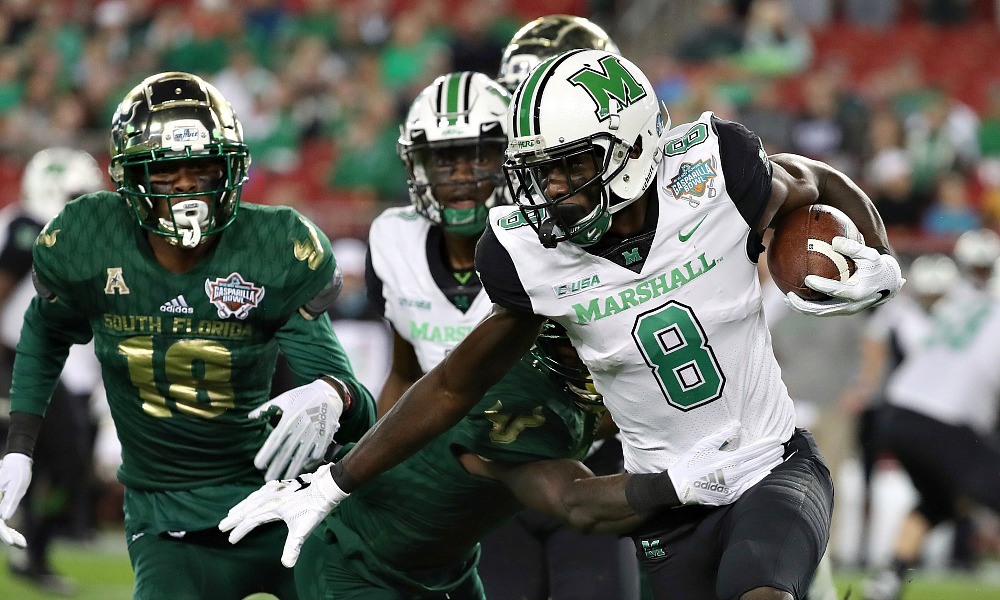 The Marshall Thundering Herd had been perfect in postseason play under head coach Doc Holliday. That run continued Thursday as the Herd (9-4) amassed over 500 yards of offense on their way to defeating the South Florida Bulls (7-6) 38-20 in the Bad Boy Mowers Gasparilla Bowl.

The cousin tandem of quarterback Isaiah Green and tailback Keion Davis spearheaded the offensive output for Marshall. Green threw for 221 yards and added 36 yards and a TD running the football. Davis accumulated 94 yards rushing and a pair of touchdowns. Four Marshall players found the end zone rushing the ball in the game with Brenden Knox (93 total yards) and Anthony Anderson (43) also scoring. The Herd rushed for 282 yards as a team in the game. Tyre Brady was the leading receiver with 5 receptions for 88 yards.

Touchdowns by Green and Anderson enabled Marshall to take a 14-0 lead with just under five minutes remaining in the first quarter. After a USF score moments later cut the deficit in half, Knox scored in the final minute of the first and Marshall led by double digits the rest of the game. An 18-point halftime lead equaled the final margin as the largest leads of the game.

The win runs Holliday’s record in bowl games at Marshall to 6-0. The Herd have now won 8 games or more in four of the last five seasons. With Green just being a freshman, the offense will remain primarily intact heading into next season.

For South Florida, the loss capped a disappointing final two months to the season. Following a perfect 7-0 start, Charlie Strong’s crew closed losing six straight after losing Blake Barnett to injury. Barnett tried to rally the team in the Gasparilla Bowl on their home field but was clearly hampered by his various injuries as he completed under 50% of his passes. Receiver Randall St. Felix was the star of the night for the Bulls, catching 6 passes for 165 yards and 2 touchdowns.