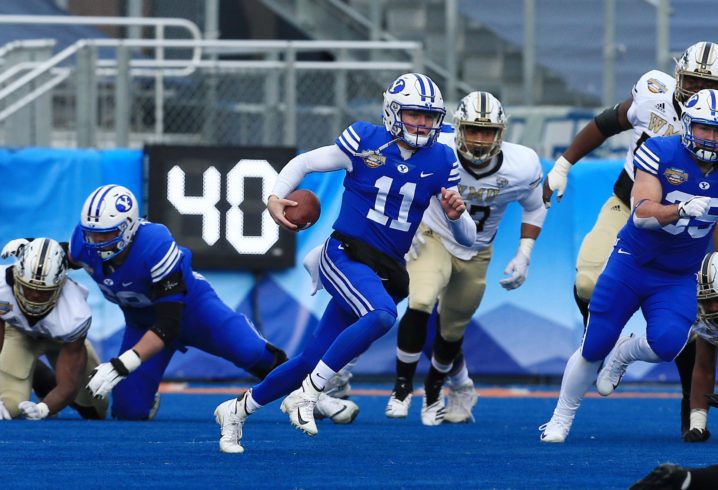 The two bowl games in action Friday couldn’t have taken place much further apart. The Makers Wanted Bahamas Bowl was played in the middle of a warm Caribbean winter while the Famous Idaho Potato Bowl, in its 21st year, is the longest running cold weather bowl game in college football. Despite the climate and elevation differences, both bowl games had Mid-American Conference teams fall short. Conference USA’s FIU Golden Panthers (9-4) edged the Toledo Rockets (7-6) 35-32 in the Bahamas Bowl while the FBS Independent BYU Cougars (7-6) dominated the Western Michigan Broncos (7-6) in the Famous Idaho Potato Bowl en route to a 49-18 victory.

Things certainly didn’t start according to plan for FIU. After a fumble on the opening kickoff led to a quick Toledo touchdown, the Golden Panthers ultimately found themselves trailing 10-0 after the first quarter. A pair of second quarter touchdowns, one rushing by Anthony Jones and one receiving by Sterling Palmer enabled FIU to pull in front 14-10 at the half. FIU retained that advantage into the final quarter after Jones answered a Rockets touchdown with one of his own late in the third. The Golden Panthers turned up the defense in the fourth quarter and secured their first double digit lead of the day. The final 35-32 margin was made closer by a last-second Rockets TD.

Jones dominated the box score for the Golden Panthers with his 3 rushing touchdowns and 92 yards. The performance was remarkable given that Jones was one of two FIU players who fell victim to a drive-by shooting in September. After nearly losing an eye and having to be fed by tube in the days that followed, Jones worked his way back onto the field and finished with 338 yards rushing and 6 scores in his shortened senior season. FIU needed its backs to step up in the bowl game as they were playing without starting quarterback James Morgan due to injury. Christian Alexander played exceptionally well in his place however, throwing for 209 yards, 1 score, and no interceptions. He also amassed 83 yards rushing. Palmer was the team’s leading receiver on the day with 64 yards.

Despite falling short in the bowl game, this Toledo Rockets offense finished second on the all-time program list of highest scoring offenses with 525 total points on the year. QB Eli Peters had a big game in defeat, throwing for 264 yards and 3 scores while also leading the Toledo rushing attack with 43 yards. Diontae Johnson went for 98 yards receiving and a touchdown while Jon’Vea Johnson found the end zone on 2 of his 3 receptions in the game.

Western Michigan was able to handle BYU’s first quarter punch with a second quarter response that saw the Broncos go up 10-7 at the half. That was the last time WMU would have even a sniff of the lead. The Cougars dropped a whopping 28 points in the third quarter to take command and added two more touchdowns in the fourth on their way to the 49-18 triumph. BYU piled up 490 yards of total offense for the game despite losing the time of possession battle by over 10 minutes.

Freshman Cougars quarterback Zach Wilson pulled off the improbable with a perfect passing day. Wilson finished 18 for 18 throwing for 317 yards and 4 touchdowns. His flawless completion percentage made him just the second quarterback to post a 100% completion percentage in a College Football bowl game. The other was Riley Skinner who went 11 for 11 for Wake Forest in the 2008 EagleBank Bowl.

Dylan Collie was Wilson’s favorite target of the afternoon, hauling in 6 receptions for 124 yards and 2 touchdowns. Aleva Hifo finished with 85 yards receiving and a score while Neil Pau’u (57) and Matt Bushman (52) also eclipsed the 50-yard mark for receiving. BYU also got plenty from Riley Burt on the ground as he carried for 110 yards and a score. Brayden El-Bakri and Dayan Ghanwoloku also scored rushing TDs. After a disappointing 2017 campaign, BYU capped off a much improved 2018 season with the Potato Bowl win.

Western Michigan struggled to sustain many drives, perhaps feeling the absence of starting quarterback Jon Wassink. Kaleb Eleby was frustrated into just 175 yards passing and a pick. He did manage to score a rushing touchdown. The running back tandem of Jamauri Bogan and LeVante Bellamy combined for 118 yards rushing. Bogan found the end zone for the other Broncos touchdown.

Dolphins vs Ravens Prediction, NFL Betting Trends and Week 2 Picks Against the Spread

Top 3 Most Profitable Horse Races in the World