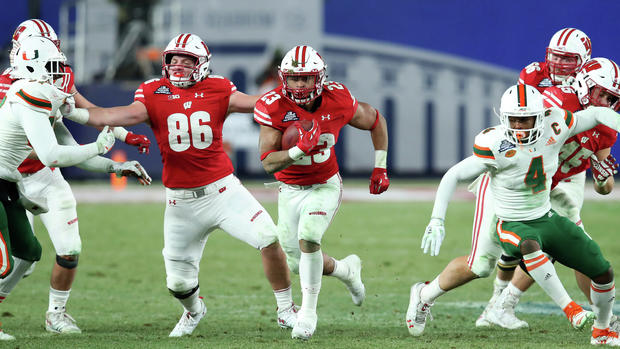 Thursday’s bowl action included a matchup between American and ACC foes in Shreveport, Louisiana, a tussle between Big Ten and ACC opponents at Yankee Stadium in New York City, and a Big 12-SEC showdown in Houston. To summarize it all in one sentence, if your mascot started with the letter “B”, you were walking away a winner.

One can never underestimate the importance of halftime adjustments. Thursday’s Independence Bowl between the Duke Blue Devils (8-5) and Temple Owls (8-5) displayed this sentiment perfectly. Duke trailed at the half, but you would never know it by looking at the final score. Five second half Blue Devils touchdowns combined with the defense pitching a second half shutout powered Duke to a 56-27 rout of the Owls.

The Blue Devils got off to a slow start thanks to the Temple defense and special teams. A Duke interception was returned by Delvon Randall 52 yards for a Temple touchdown. The Owls took a 27-14 lead with just over 4 minutes to go in the first half, and then the Duke comeback train began. A 22-yard TD pass from Daniel Jones to TJ Rahming with around a minute left in the first half marked the first of seven consecutive Duke drives that would end in touchdowns. Jones finished 30 of 41 for 423 yards passing and connected with four different receivers on 5 touchdown passes. Rahming was the favorite target, hauling in 12 receptions for 240 yards and 2 scores. Chris Taylor had 56 yards receiving and a touchdown. Deon Jackson led the Blue Devils’ rushing attack with 41 yards and three other players, including Jones, scored rushing TDs. Duke’s 13-point second quarter deficit had flipped into the 29-point final margin of victory with over 10 minutes left in the fourth quarter.

Owls QB Anthony Russo threw for 228 yards and a score, but he was far overshadowed and outplayed by Jones. The Blue Devils shut down the Temple rushing attack, holding the Owls to just 53 total yards on the ground. Brodrick Yancy was the leading receiver with 5 catches for 57 yards and a touchdown.

The win makes Blue Devils head coach David Cutcliffe 4-0 all time at the Independence Bowl. He had three other wins as the head coach of Ole Miss and is already in the bowl’s Hall of Honor. For Jones, the 6-touchdown day was a big-time statement as he looks to join the main quarterback discussion for next spring’s NFL Draft. Temple will be welcoming in new head coach Manny Diaz in 2019 after Geoff Collins left for Georgia Tech prior to the bowl game.

When you are forced into battle without your starting quarterback, it is only natural to expect the running game to step up. That was just the case for the Wisconsin Badgers (8-5) in Thursday’s Pinstripe Bowl against the Miami Hurricanes (7-6). With Alex Hornibrook sidelined by a concussion, Jonathan Taylor amassed over 200 rushing yards, four different Badgers scored rushing touchdowns, and Wisconsin crushed Miami 35-3.

This edition of the Pinstripe Bowl was all about Taylor, arguably the best running back in College Football this season. In what was a homecoming game of sorts, the sophomore from New Jersey carried 27 times for 205 yards and a touchdown, putting him well over the 2,000-yard mark for the season. He finished with 2,194 total yards and 16 touchdowns on the year. It was his fifth 200-yard game of the season. In edition to Taylor, Taiwan Deal rushed for 52 yards and a score, Alec Ingold and QB Jack Coan also scored rushing touchdowns, and the Badgers accumulated 333 rushing yards as a team.

Coan only threw for 73 yards, but he didn’t have to do much else. He hit Kendric Pryor on a 35-yard touchdown pass to open the scoring. Taylor’s touchdown came midway through the first. A Bubba Baxa field goal for Miami and a scoreless second quarter on both sides had Wisconsin up 14-3 at halftime. Despite not completely pulling away until late in the third, the game never really felt close as the Badgers dominated throughout. The Hurricanes couldn’t muster much of anything offensively. Quarterback Malik Rosier did rip off some big runs for 90 total yards, but his 3 interceptions more than canceled that out. Miami finished with just 169 yards of total offense and 5 total turnovers.

With Taylor coming back, Wisconsin figures to bounce back next season as long as key contributors can stay healthy. Miami will need to figure out whether or not N’Kosi Perry is the answer at quarterback before they can expect anything similar to last season’s magical run.

If you are a fan of offensive football, Thursday’s Texas Bowl was your kind of game. The Baylor Bears (7-6) and Vanderbilt Commodores (6-7) combined for 1,241 yards of offense, 83 points, and a whole lot of bad tackling. A 52-yard touchdown reception by Marques Jones with just under 2 minutes to play broke a 38-all deadlock and allowed the Bears to pull out a thrilling 45-38 win.

The action was nonstop, and momentum swung back and forth throughout the whole game. There were nine different lead changes with the largest lead at any point being just 10 for Baylor in the third quarter. A Khari Blasingame touchdown run in the final minute of the quarter brought Vanderbilt to within 3 heading to the fourth. Blasingame found the end zone again five and a half minutes into the fourth to put the Commodores back on top. It took the Bears all of 12 seconds to answer as Charlie Brewer found Trestan Ebner for a 75-yard touchdown pass. Vanderbilt drove deep into Baylor territory on the ensuing possession but had to settle for a field goal to tie things up. That set the stage for Brewer and Jones to connect. The Baylor defense forced a Vandy turnover on downs following the score to officially seal the win.

Brewer finished the game with 384 yards passing and 2 touchdowns through the air. He also was the Bears’ leading rusher, going for 109 yards and a score. Ebner (90 yards), JaMychal Hasty (58) and John Lovett also all scored a rushing touchdown. Ebner was the leading receiver with 109 yards and the long touchdown catch on 3 receptions. Densel Mims finished with 6 receptions for 95 yards while Tyquan Thornton had 3 for 72.

Running back Ke’Shawn Vaughn was the star of the night for the Commodores, carrying the ball 13 times for a whopping 243 yards and a pair of touchdowns. In his final collegiate game, quarterback Kyle Shumur finished with 286 yards passing and a touchdown. The recipient of that TD pass was Blasingame who had 85 yards receiving, and the pair of TD runs for good measure. Jared Pinkney was not far behind with 76 receiving yards on 5 catches.