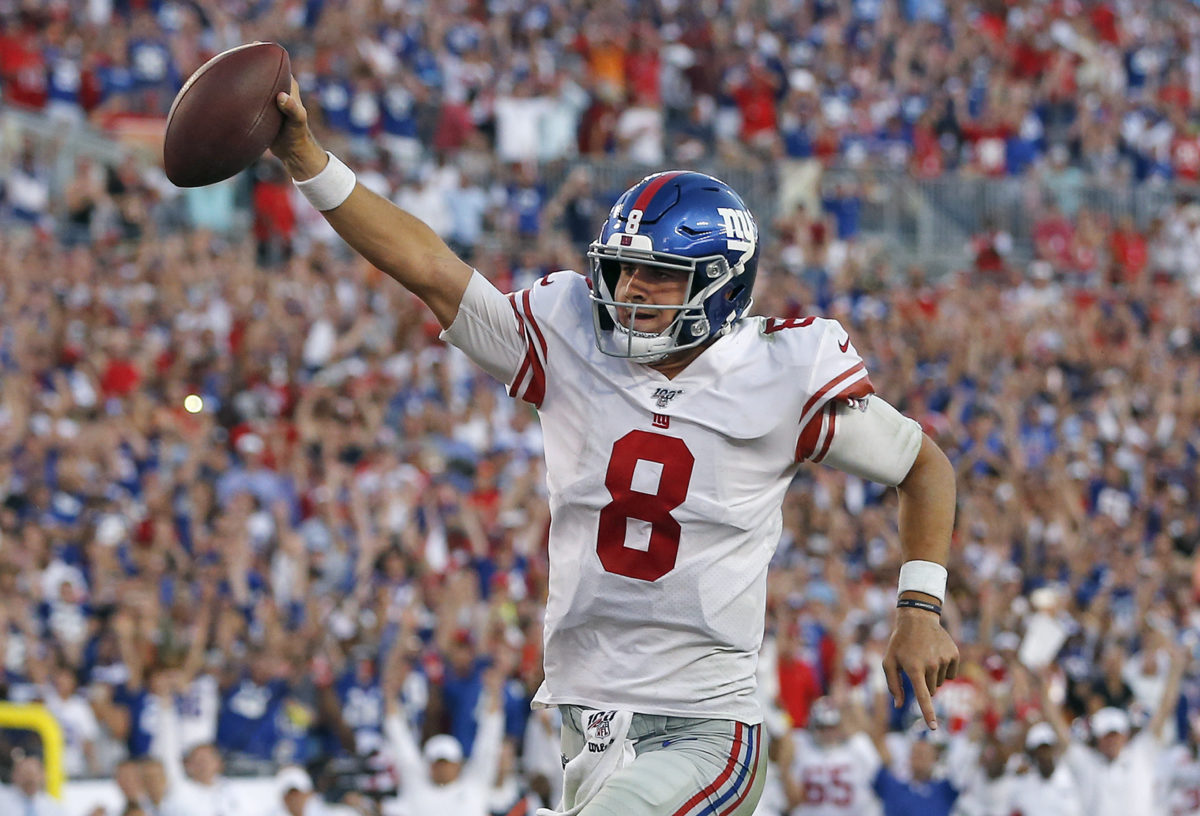 Week 4 of the NFL season started off with a bang, as the Philadelphia Eagles and Green Bay Packers gave us a rare Thursday Night thriller. With 14 more games coming down the pipe this weekend, there are plenty of opportunities for bettors to make some hay. Here are some of my favorite bets against the spread this week.

The spread for this NFC East divisional matchup has held steady, for the most part. A half-point move in favor of the Redskins was likely in reaction to quarterback Case Keenum shedding his walking boot and practicing in full Thursday. That quickly reverted to the original spread of 3.0 Friday. Neither team is necessarily strong, but New York is likely laying three due to a combination of playing at home and the franchise revitalization of sorts that was the by-product of Daniel Jones’ first career NFL start.

A matchup against a Redskins defense that made Mitchell Trubisky look good and is playing on a short week bodes well for a successful Danny Dimes’ encore. Expect a full dose of Sterling Shepard and Evan Engram, as New York will of course be without the injured Saquon Barkley. If Wayne Gallman can do enough running the football to keep Washington honest defensively, the Giants should have no trouble outscoring the points their leaky defense will allow (betting the over on the 49-point total is another play to consider for this game).

Defense will likely be at a premium when the Jaguars and Broncos tangle Sunday at Mile High. Both teams have combined for just one win over the first three weeks. Denver exceeded some expectations on the road in Green Bay last week, but placing trust in Joe Flacco and a disheveled offensive line is a big risk. The Jags’ defense rekindled their “Sacksonville” identity last Thursday, as they brought Marcus Mariota down a whopping nine times. There may be a few more sacks on the horizon for Calais Campbell and company against a Broncos line that has already surrendered 11 on the season.

On the other side of the ball, the Denver defense has failed to record a single sack or takeaway all season, a shocking stat given that head coach Vic Fangio was essentially hired on the heels of his season-long defensive masterpiece with the Chicago Bears. Gardner Minshew has played well thus far, filling in for the injured Nick Foles. If Jacksonville can jumpstart Leonard Fournette and the running game, it would help the rookie signal caller all the more. With Jacksonville catching a full three, even being on the wrong side of a field goal margin will result in a push and won’t harm your bankroll.

The Chiefs have the tougher test of the two, as they travel to take on the Detroit Lions. Matthew Stafford and the Lions offense have been proficient through three weeks and one would expect the unit to continue to produce against the shaky Kansas City defense. Whether or not they can outproduce the defending MVP Patrick Mahomes is another story. The Chiefs are still without Tyreek Hill and also short Damien Williams, but youngsters like Mecole Hardman and Darrel Williams have performed exceptionally in their absence. While my numbers like the Lions at the straight line of 6.5, teasing the Chiefs all the way down to just needing to win outright is as sound a bet as any.

Like the Chiefs, the current 6.5-point spread on the Colts’ home tilt against the Oakland Raiders enables the game to be teased down to just an Indianapolis outright win. T.Y. Hilton’s status remains uncertain for Sunday, but Indianapolis has enough weapons to fill the void. If Hilton can’t go, look for wideouts Parris Campbell, Zach Pascal, and Deon Cain to step up. It would also likely lead to Jacoby Brissett targeting tight ends Eric Ebron and Jack Doyle with more consistency. Regardless, the stout Colts offensive line should have no trouble with the Raiders front seven, meaning ample pass protection and plenty of running lanes for Marlon Mack.