Despite the woeful performance of the Chicago Bears offense in 2019, there was one bright spot. It was wide receiver Allen Robinson, and his fantasy football production backs this up.

In two seasons with Chicago, Robinson has been the teams leading receiver both years. Furthermore, Robinson only caught 55 balls for 754 yards in 2018, nearly doubling that production last season. With many questions still remaining for the Chicago offense, Robinson will be the constant giving you that WR1 type production.

Although Chicago ranked 25th in passing offense, Robinson far outplayed his PPR ranking in 2019. Starting the season at WR27 in PPR formats, he finished at WR8, behind some of the league’s best. Robinson brought in nearly 40 extra receptions and 300 extra yards above preseason projections.

As a whole, the Bears made improvements on the offensive side of the ball that bodes well for Robinson. This will be Matt Nagy’s third year with this Chicago offense, and they have a hopeful upgrade at quarterback, with the acquisition of Nick Foles. Furthermore, a developing Anthony Miller will help Robinson’s case. Miller will look to take away some attention from Robinson, leaving him more one-on-one opportunities, in which he thrives.

With just over a month until the season begins, Robinson’s ADP has stayed pretty consistent. Over the past month, you are looking at a mid to late third round pick on Robinson. 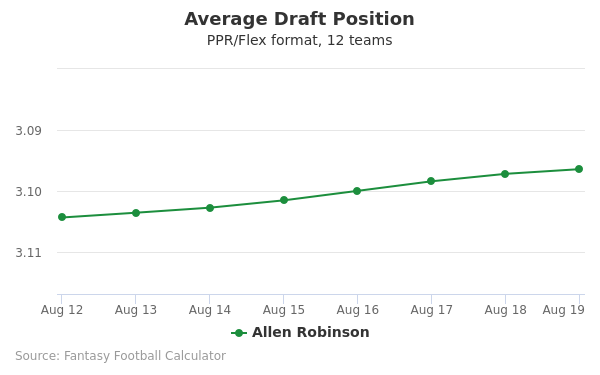 All in all, pairing his production from last year, with an upgrade at QB, I see Robinson as a steal in the late third. After all of the “superstars” are off the board, you will be able to take RB early and get great value with Robinson with your third pick.

For all of his early fantasy rankings for each position, check out this link.

Toronto Maple Leafs -170 is Steal of the Summer

Should Philip Rivers Make the NFL Hall of Fame?