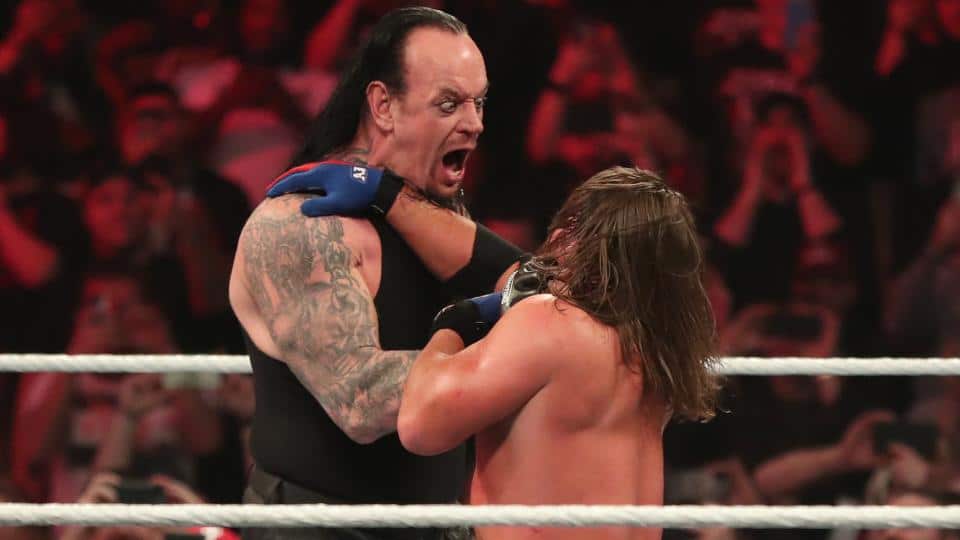 WWE has a knack of taking certain matches or gimmicks and squeezing them for every creative drop they are worth, which often ends up as a determent to what was once a beloved occasion. The tradition continued last night inside the Elimination Chamber.

Though the Elimination Chamber PPV provided us with a handful of entertaining moments, there were no real stand out matches. The men’s chamber seemed very thrown together, and lacked the cohesion and flow of a great match. Though it wasn’t great it also wasn’t totally for nothing, as they were able to further the Otis and Dolph Ziggler story line, and Lince Dorado provided us with the most impressive move of the night, when he pulled off a shooting star press while hanging from the top of the cage.

I have always hated spots where everyone stands around in a big group and just stares as the guy comes flying in on top of them without even attempting to move. Despite this spot being the pinnacle of that, it is worth watching again. Beyond those things, the match didn’t have much to offer. The champs retained, and the night moved on.

Undertaker showed up to help Aleister Black, which was a surprise to absolutely no one. He got a nice pop, of course, but you could see it being set up within the match from miles away. It was the classic Undertaker spot. Black was compromised, the lights went off and, when they came back on, Undertaker had both members of the O.C. by the throat.

In all my years as a wrestling fan, I’ve not figured out how they do those run ins/pop ups. They couldn’t seriously have made 54-year-old Mark Calaway wait under the ring for three-plus hours, could they? I wouldn’t think so, but how else do they pull it off?

This little interaction prompted other thoughts in my head as well. Is Taker vs AJ really the match we want? There is no stopping it now, so this is somewhat moot, but do we truly even want another Undertaker match at all? Will AJ have the ability to carry him? Neither time he has been on the receiving end of a choke slam has looked very smooth. Will this be the actual end for Taker and his WrestleMania matches?

Remember three years ago when everyone was so emotional about having watched the Undertaker’s retirement match against Roman Reigns? Thousands of people were crying as they witnessed The Deadman leave it all (including his iconic hat and trench coat) in the middle of the ring. It prompted real sadness in the WWE Universe, accompanied by 10 minutes of unrelenting boos toward Roman the next night on RAW, and continued to provide him with the most heat he’s ever had. We have gone a long way down a different road since then.

Maybe the best course of action is to have a match involving the entire O.C. as well as a partner for Taker. Presumably Aleister Black. This would open the door for a longer match, more mid-match breathers for Undertaker, and hopefully some dark and devastating tag-team maneuvers!

I was very surprised with the result of Sami Zayn/Shinsuke Nakamura/Cesaro vs Braun Strowman match. I thought they would use this as an opportunity to further Braun’s reputation as untouchable and unbeatable. When you give the biggest man in your company a title belt, you end up having only a few options. Either the wrestler has it for a very long time and then usually gets cheated out of the belt, or relinquishes the title. Since Braun had already done the latter, creative had to come up with something new. When you think about it, if you still want to be able to bill him as a “monster among men” in the future, forcing him to fight three men is a sensible way to take the belt off him.

With a little help from his friends, Sami Zayn won the Intercontinental title in his first PPV match since June 2019, and his first televised match of any kind since August 2019. I’m looking forward to his reign, as I’ve always been a fan of Sami. He’s never held a WWE title outside of NXT, and this gives him even more ammo on the mic.

After that nice little surprise, the Elimination Chamber predictability continued with Shayna Baszler absolutely tearing through her opponents. She had everyone else eliminated before Asuka even left her pod. They also left many fans disappointed by not doing anything with the Riot Squad. Part of the buildup for this match centered around the fact that all three of them would be in the chamber together. Would old alliances temporarily come back? Who would come out the alpha of the former stable?

We didn’t get a chance to find out the answers to any of those questions, as Sara Logan and Ruby Riot were promptly eliminated by Baszler after minimal contact with each other. Liv Morgan lasted slightly longer, but only because of the protection the pod offered her. Once the door opened, it was over.

I thought this was, without a doubt, the quickest chamber match of all time. By my unofficial count, it lasted 19:20. After doing a little research, I found the only match to rival it was at SummerSlam 2003 when Triple H was somehow able to defeat Goldberg, Chris Jericho, Shawn Michaels, Randy Orton and Kevin Nash in just 19:12.

This is the exact kind of PPV that makes me concerned when I hear WWE is considering going back to the old days of charging per show, or selling the streaming rights to another platform. If it’s just for big shows, I guess I can suck it up and deal with it. However, if they decide to go this route how many people are ponying up $20-25, or whatever it may end up being, for a wrestling show that makes them feel “eh” the entire time. Add to that the frequency of WWE’s PPV events, and the constant lazy repeat booking of matches (take for example Andrade vs Humberto Carrillo. Tonight was their seventh match together since December, including THREE championship opportunities for Carrillo who has lost them all) and I think they could be in for some very low buy rates.

All in all, this very average show, which I would not have lost any sleep over if I had missed, is what I’ve come to expect out of WWE and their PPVs.