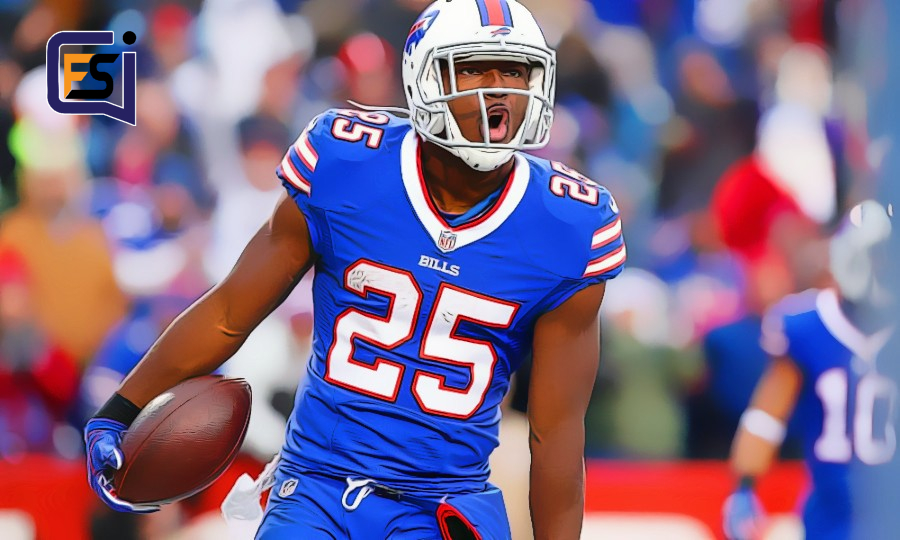 A year after making the playoffs, the Bills have made some changes to their QB situation. They traded Tyrod Taylor to the Browns, brought in AJ McCarron from the Bengals and drafted Josh Allen in the first round of the NFL draft, making LeSean McCoy one of the only carryovers from last season’s backfield. Although the receivers are pretty much intact from 2017, they were not very productive and it is expected that the offense will, once again, run through McCoy. While that projected volume should make him a coveted RB1, I expect a regression of sorts.

According to several websites that track ADP (Average Draft Position), McCoy seems to be drafted in the second round of redrafts. I believe that there are several players who are going around, or after, McCoy’s ADP and who will be more productive in 2018.

To begin, we will look at LeSean McCoy’s statistics with the Bills, since he arrived in 2015. That same season, Buffalo also signed Tyrod Taylor, who won the starting QB job in training camp. His stats during that time frame will also be shown.

As shown above, McCoy and Taylor both had their most productive and effective rushing seasons with Buffalo in 2016. The offensive line did not change very much between 2016 and 2017, so what factored into the drop in production? Well, Taylor was healthy for all of 2016 and did not miss a game due to injury (he was benched once the Bills were out of the playoff hunt). In 2017 however, he injured both his groin and his patellar tendon, the latter caused him to miss a game in December. This helps explain why his rushing attempts dropped by 11 as compared to the 2016 season. While this gave McCoy more chances to run, it also hurt his efficiency. I would venture to say that the lack of Taylor’s running threat allowed defenses to focus more on McCoy.

The year-to-year changes in McCoy’s effectiveness can also be seen in the red zone. In 2016, McCoy had 12 total red zone touchdowns, which put him behind only LeGarrette Blount, David Johnson and Melvin Gordon for the lead among RBs. By contrast, in 2017 he only had five red zone TDs with one less rushing attempt and seven more targets.

McCoy’s situation with the Bills reminds me of a QB/RB tandem who both formerly played NFL football for the team from Washington: Robert Griffin III and Alfred Morris.

As shown below, RG3 and Morris both had their most productive rushing seasons in their 2012 rookie year. After that, both players’ yards per carry dropped on an annual basis. Injuries began to pile up for RG3 at the end of 2012. He began to run less and less every season, allowing teams to focus much more attention on Morris, limiting the latter’s effectiveness.  I worry that without Tyrod Taylor in the Bills backfield, a similar fate will befall LeSean McCoy.

The Bills de facto starter at this moment is AJ McCarron. He is not what one would describe as a mobile quarterback. In 2015, when he started five games (including a playoff game) for the Bengals, he only ran 19 times for 40 yards (2.1 AVG). Needless to say, it is not expected that McCarron will duplicate Taylor’s production on the ground.

Josh Allen, however, is the X-factor. It is not known how much he will run with the Bills, if and when he becomes the starter. In College, at Wyoming, Allen ran 142 times in 2016 and 92 times in 2017, in 14 and 11 games respectively. While he averaged more rushing attempts per game than Taylor ever had in the NFL, Allen was not overly productive with his chances. He had 523 rushing yards in 2016 and 204 in 2017. That gives him a 3.7 yard per carry average in 2016 and a 2.2 average in 2017. If he was an effective runner, he would have shown it in college.  Wyoming is not in the Power 5 Conferences, which means that Allen was not playing against the top defensive talent in the nation on a consistent basis. While that also means his offensive line wasn’t the greatest, the o-line he is going to have just lost three starters and might not be as effective as it has in years past.

Speaking of the offensive line, one of the most important aspects to a running back’s production is the offensive line on his team. Thankfully for LeSean McCoy, and the Bills in general, their o-line has been ranked by Pro Football Focus as being the 9th, 10th and 10th best over the last three seasons respectively. The offensive line has remained mostly in tact over that time. 2015 was the year that Richie Incognito (OG) joined the Bills, while Eric Wood (C) and Cory Glenn (OT) had been there since 2010 and 2012 respectively. Now, Incognito is gone, Wood is retired and Glenn was traded to the Bengals. While the Bills have found Glenn’s replacement in the form of Dion Dawkins, it is the interior of the line that concerns me. In 2014, before Incognito arrived in Buffalo, PFF ranked the Bills as the 22nd best o-line. It is possible that without Incognito and Wood, the o-line reverts closer to that standing.

LeSean McCoy will be turning 30 during the summer. Although the age alone isn’t necessarily indicative of a player’s production, it is extremely unlikely that McCoy will be much better at 30 than he was at 29. On its own, being 30 for a RB is not a death sentence, but if the offense is going to hinder his chances at producing, either because of QB play or the o-line or both, then it stands to reason the player in question will have a difficult time duplicating his production of previous years.

While I am not advocating avoiding LeSean McCoy in your fantasy drafts, I would not take him over other players who have a similar ADP. I have seen him ranked at 16 and 17 respectively on two different ADP tracking websites. Players that he is either equal to or higher than on both sites include:

These are all players that I would rather own my fantasy teams in 2018.