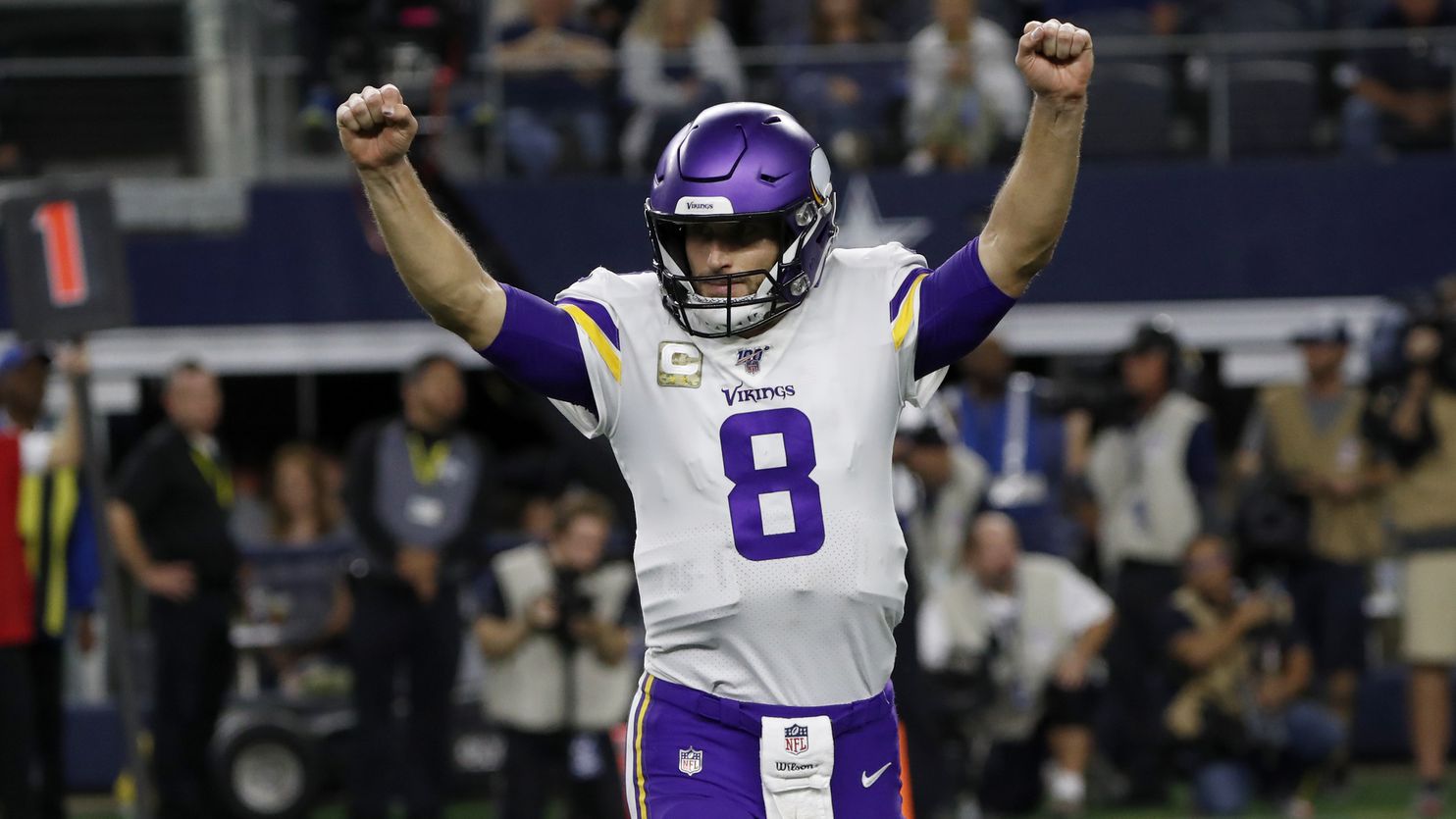 Hey, congrats on making the playoffs! It’s never an easy road, but you’ve made the right decisions so far, and now you’ve got a ticket to the big dance. Or, maybe you’re in the consolation bracket and are desperate to avoid your league’s last place fantasy punishment. Either way, the pressure gets ratcheted up to nauseating levels starting in Week 14, and you know as well as anyone that the time for losing games has come to an end. The opponents are tougher and the stakes are higher, but someone in your league is about to go on a three-game run for the ages and achieve league immortality. And it could be you. Time to go out there and start your title run.

So it’s more important than ever to get the right players into your lineup this week. Here are a couple of players that I believe you should start (or avoid) as we head into the postseason.

Relatively matchup-proof since Week 5, Cousins hasn’t quite gotten the love he deserves as a no-hesitation start. Cousins is the seventh overall player since Week 5, and the sixth-best QB, and has hardly slowed down at all since Adam Thielen went missing with a hamstring injury. From Week 5 to Week 8, weeks Thielen was healthy, Cousins averaged 22.9 points per game. In the four games since his injury, Cousins is averaging 20.4 points per game. He draws an exceptional matchup in the Lions for the first round of the fantasy playoffs, who allowed Cousins to post a season-high 30.2 fantasy points in Week 7, and just allowed Mitch Trubisky of all people to throw for 338 yards and three touchdowns. Absolute must-start.

Tannehill ended last game with his worst fantasy score since taking over as the Titans’ starting quarterback, but he still passed for two touchdowns and looked efficient and effective. While not as reliable a starter as Cousins, Tannehill should enjoy a very nice bounce-back game against the Raiders, who have already allowed 27 touchdown passes on the season (T-third most). Derrick Henry’s usage is capping Tannehill’s passing volume, which is a concern, but the Titans’ overall offensive efficiency, coupled with the fact that the Raiders’ weakness is their secondary, should give Tannehill enough opportunity to make plays in this one.

Brees has been a good fantasy QB this year, but has he been so good that you feel comfortable trusting him in your playoff game as he takes on the defensive unit that has allowed over 300 fewer passing yards than the next best team? The defensive with the second-most sacks in the league? I would go on but it’s pretty well understood how dominant the 49ers have been on defense this season. There are very few quarterbacks who I would trust in fantasy against San Fran, and Drew Brees, who has two sub-12-point games in his last four weeks, doesn’t make that list this season. It would be a gift if he gave you any more than 15 points.

Ryan hasn’t topped 17.6 points since Week 6, which just isn’t the upside that tends to spark playoff runs. The Panthers are going to be a bit of an unknown now that they’ve moved on from Ron Rivera, but their strength has been against the pass for the most part this season. Nothing specifically points to a disaster of a game from Ryan here, but nothing extraordinary appears to be in the cards either. Don’t freak out if he’s all you have, but if a more appealing player such as Cousins is available, it wouldn’t be crazy to make a switch.

While we’re on the subject of Falcons-Panthers, I’ll admit that I may have understated things a bit when I said that the Panthers pass defense is their strength. What’s closer to the truth is that their rush defense is ABYSMAL. It’s unfathomable how many touchdowns this team is allowing on the ground. Coming off a game in which they allowed Derrius Guice and Adrian Peterson to combine for 228 rushing yards and three touchdowns on just 23 carries, the Panthers now lead the league even more in ineptitude at stopping the rush. They rank dead last in both yards-per-carry and rushing touchdowns allowed. This sets Devonta Freeman up for a heavy and tremendously beneficial workload, after he proved that he could handle it coming off his injury, with 21 total touches against New Orleans on Thanksgiving

Hunt has been a valuable offensive weapon from the moment he was eligible to play for the Browns four weeks ago. He’s been targeted 25 times in that span, catching 20 of them, and he’s being used occasionally on the ground as well to give him the stable floor that comes with players that consistently receive double-digit touches. He’s now scored a touchdown in two straight weeks, and now gets the privilege to run circles around the poor Bengals and their hopeless defense. There’s still plenty of value to be had from Nick Chubb’s scraps, so plug Hunt in and enjoy his new role as a pass catching back.

Mack is working his way back from a broken hand and is questionable to play Sunday in Tampa Bay, but approach this week the same way whether he plays or not, because he should be on your bench regardless. A banged up player getting swarmed by one of the league’s top rush defenses is no recipe for a productive fantasy day. The Colts will likely exploit Tampa’s secondary, and work in Jonathan Williams and Jordan Wilkins more than owners would prefer. No Colts back should see much success on Sunday.

Every 49ers Running Back at Saints

If you want to try to solve the 49ers backfield a week after Raheem Mostert out-touched Tevin Coleman 21-6, receiving double-digit touches for the first time since Week 3, with Matt Breida coming back into the equation, AND with a matchup against one of the scariest rush defenses in the entire league, then on your own head be it. Should be a great game though.

I’m all the way in on Tyler Boyd for as long as Andy Dalton is back, which should hopefully be the rest of the season. Boyd was a reliable WR2 while Dalton started earlier in the season, and produced a very solid 5/59/1 on 10 targets against the Jets in Dalton’s first game back. He takes on the Browns next, which isn’t particularly encouraging by itself, but Boyd is an above average start against almost any team just as long as his quarterback is competent.

Tyler Lockett has now failed to surpass seven fantasy points for three games in a row, and DK Metcalf has stepped up to fill the void, taking on quite a large role as almost the Seahawks’ go-to guy. Metcalf has caught six passes in three of his last four games, reaching at least 70 yards in each of those three games. He isn’t a boom-or-bust player, but he still has big play potential, and so he should be a strong FLEX play for the rest of the season.

That three-touchdown game against the Buccaneers was something, wasn’t it? It’s too bad that those are the only three touchdowns Kirk has this season. Kirk has been a relative disappointment this year, and while he can still be a serviceable fantasy player on the right week, the Steelers aren’t likely to be the matchup where he breaks off many big gains.

Gallup has taken a turn for the worse in the last two games, and the Bears, who rank sixth-best against the receiver position, could very well keep him bottled up another week. Gallup is something of a boom-or-bust player so you never know, but hopefully you can do better at this point in the season.

I have been nothing but low on Vance McDonald this season. He had the potential for a real breakout season and failed to live up to expectations. That being said, I wasn’t exactly high on Tyler Higbee either and he just wrapped up a seven-catch, 107-yard game with a touchdown against the Cardinals defense. Something about tight ends just eludes head coach Kliff Kingsbury and defensive coordinator Vance Joseph, as the Cardinals are allowing over FOUR more points per game to tight ends than any other team, and just about TEN more than the NFL average. The average score by the position so far has been over six points per game better than 2019 TE1 Travis Kelce’s season so far. It almost defies logic, but the “tight ends vs the Cardinals” strategy has barely failed yet. Look to McDonald first if you don’t have a reliable tight end already.

A concussion sustained last Sunday may hold Olsen out of this game, but much like Marlon Mack, even if he’s available, it would be best to stay away. Too many better TE starters are widely available, including McDonald, Jacob Hollister and Kyle Rudolph. Olsen has a nice floor, but with just one game above 10.7 points since Week 4, he isn’t a top-12 TE this week.