Trading players in fantasy football leagues is a common occurrence. Here are players that should trade away but also those that you should trade for. 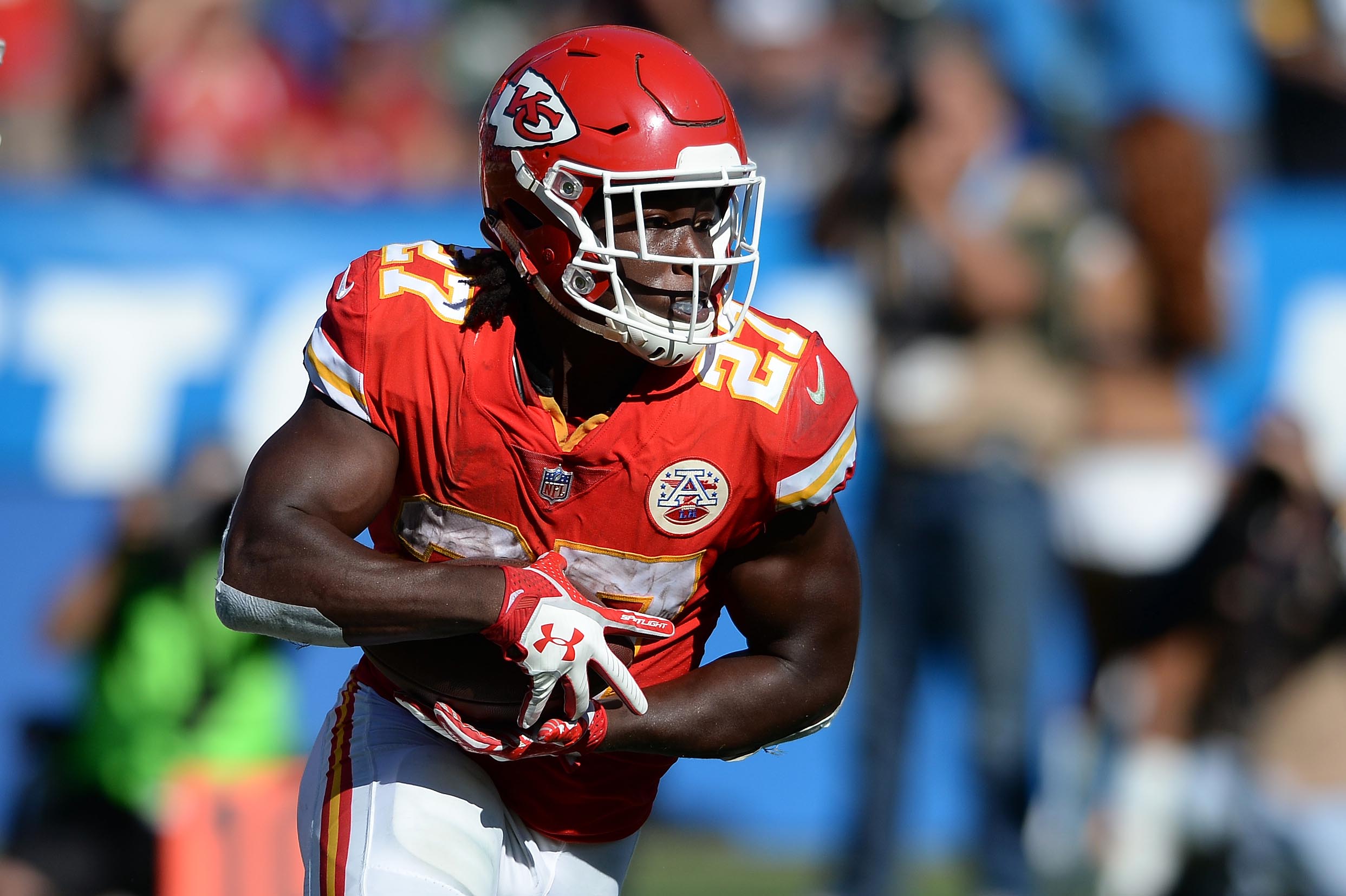 It is that time of year in fantasy football. In most leagues, we are about halfway through the season. With regards to the playoffs, if you are currently on the outside looking in, there is still hope. Hope does not go a long way, however, taking action can help. Other than looking at free agents on the waiver wire, making a trade is one of the only ways to acquire talent.

In this article, I will outline both players to trade away and those that I would recommend trading for. The players in the sell section are not necessarily bad, I just feel that their 2018 value is at its peak and you should take advantage before it drops. On the flip side, the players that I am telling you to buy are not superstars. Obviously, if you can trade for a player like Todd Gurley or DeAndre Hopkins, you should definitely do that. What I am outlining are players whose production and value I expect to increase.

Note: This article is meant to be for re-draft leagues, not dynasty.

My concerns for Kareem Hunt mirror something that occurred last season. Right guard Laurent Duvernay-Tardif was injured for a portion of 2017. During that four-game stretch, Hunt failed to score a TD. While I will not say that Duvernay-Tardif’s absence was the only reason, it certainly contributed. The Kansas City Chiefs offensive line is a strong unit when all five starters are present. When someone is missing, it makes the entire unit weaker. With Patrick Mahomes playing so well as of late, it could be easy for the Chiefs to turn away from the run game if they are struggling.

While I am saying trade Hunt away, I would not advise getting anything less than another RB1 to replace him. If you are deep at RB, then a WR1 is a must in that circumstance. Because Hunt has been very productive, it should not be too difficult to get a good return in exchange for the Chief RB.

Marvin Jones Jr. was a top-12 WR in PPR formats last season. He produced 1,101 receiving yards and 9 TDs on 108 targets, which was the second most on the team. There was hope during this offseason that he could replicate most of the production from 2017. However, one of the biggest factors for Jones’ target share was Kenny Golladay. The three instances where Jones received double-digit targets in 2017 were all games where Golladay was out with an injury. Jones only has one 100-yard game when Golladay is active for the Lions. It appears that the biggest roadblock to another 1,000-yard season for Jones is the presence of Golladay. Golden Tate is still atop the WR hierarchy in Detroit therefore, Golladay’s role increase is coming at the expense of Jones.

Jones still has 3 TDs on the season, and that can be useful information when negotiating a trade. You can sell him to a fantasy manager who is not aware of the shift in the Lions’ target share. Someone will see Jones is still producing and may consider him to be a better asset than he actually is. I would trade him either to help out at another position or to improve your own WR situation.

DeVante Parker has essentially been a non-factor so far in 2018, with only 2 catches for 40 yards. Because of that, most would probably say that Kenny Stills is the locked in #1 WR for the Dolphins. While Stills’ ability as a deep-threat allows him to obtain an elevated yards per reception (YPR), he is not truly the #1 target in Miami. He is actually third among Dolphins WRs (fourth for all positions) in targets, as Danny Amendola and Albert Wilson have established themselves as reliable targets. There have only been two games in 2018 where Still has led of tied for the lead in targets among Dolphins players. I would trade Still to a fantasy manager who still believes him to be the top option in Miami.

Yet another WR who can be mistakenly considered the top receiver on his team is Demaryius Thomas. So far in 2018, Thomas has led the Broncos, or at least tied for the team lead, in targets during 2 of the 6 games that they have played. Emmanuel Sanders has become the top dog in Denver and it all starts with being on the field. There has only been one game this season where Sanders has gotten fewer snaps on offense than Thomas. That was week 2 when Thomas had 11 targets, but could only muster 5 receptions for 18 yards. That type of production will not cut it on most fantasy football teams. Luckily for managers with Thomas on their teams, the veteran WR has scored in two-straight games. This might be the biggest window to sell high on Thomas that we will see in 2018. Take advantage and try to obtain a player (or players) who can maintain a more sustainable fantasy production.

As part of the sell high/buy low principles, in this section, I will write about players who are struggling. Among those players is Jordan Howard, who had a rather impressive week 1. Since that 100+ scrimmage yard game, Howard has failed to top 81-yards in a game. The Bears offense in general, with a new coach Matt Nagy, and several new receiving options, has taken time to gel. Their two most recent games have demonstrated what many expected from Chicago’s offense. Howard certainly looked better in week 6 when he had his highest rushing yard total since week 1. Unfortunately, he fumbled on the goal-line. Because of this his fantasy day was not great. That might make those who have Howard on their team feel uneasy. This may be the best opportunity to get the RB at a cheaper price. While he only has one TD on the season, Howard has gotten 10 red-zone carries to go along with three red-zone targets. The latter is the most important aspect, as he only had 2 red-zone targets all of last year. With a stronger involvement in the passing game, Howard is worth trading for in any format.

This is a player who has been a mild disappointment so far in fantasy. Keenan Allen was a target monster last year, especially in the red zone, where he had 26 such targets in 2017. This year, he only has 5 which is less than 1 per game. One of the main reasons for that has been how much RB Melvin Gordon has been targeted in the red zone. He has 9 so far in 2018 after having 10 all of last year. Ok, so the red-zone targets aren’t as abundant for Allen as expected. He has still seen 51 targets from Philip Rivers, which is about double the amount that any other Charger not named Melvin Gordon has received. Allen also plays the majority of offensive snaps. Outside of the 65% count last week in what was a blowout against the Browns, Allen has played at least 3/4 of the Los Angeles snaps in every game this season. Above all, it is his late-season schedule that is a major factor why I would trade for Allen. From weeks 13 to 16, the Chargers play the Steelers, the Bengals, the Chiefs and the Ravens. Those are all offenses that will put up points, forcing the Chargers to go on all cylinders. Allen will probably be on the field for almost all of the snaps in those weeks and Los Angeles will need to air it out in order to keep up. While he holds more value in PPR formats, I would still (and I have) trade for Allen in non-PPR leagues.

There are several players that could be written about here who are in the same situation as T.Y. Hilton: injured star players. Another player is Leonard Fournette. Because fantasy managers are having to look at these players taking up bench spots and producing zero points on a weekly basis, they may start to lose patience. The time to make these trades is now before they return. The Jaguars have had success running the football, so there is a chance that Fournette will return to situations where he is not accustomed to. Hilton, however, will probably see 90-100% of the offensive snaps as he did in the first three weeks of 2018. The Colts are in need of a second consistent playmaker to compliment Eric Ebron. His success so far this season should create space for Hilton to produce when he returns.

Thank you for reading. Good luck with all of your trade negotiations. Hopefully, you can make the moves needed to push your teams into the playoffs. For additional assistance, make going to FlurrySports a regular part of your fantasy football preparations.