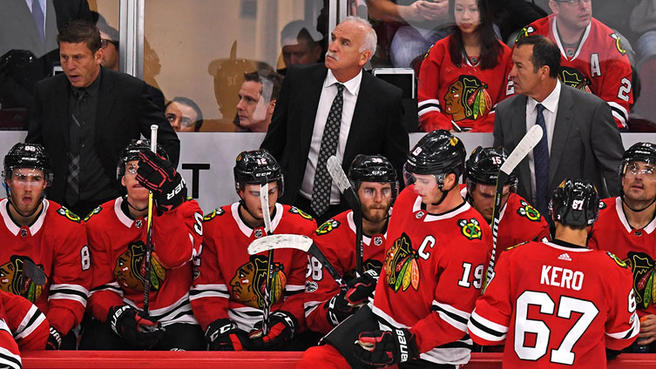 There’s a lot going on in this edition of the FlurrySports NHL Power Rankings. While the top trio is the same, there are some big jumps and plenty of moving parts in the middle of the pack. A few young teams are slowly inching their way up the back end, and a pair of struggling teams have already canned their coaches with the season only a month old. Read on to find out where your team stacks up.

*Records and statistics through Monday, 11/5*

Excitement is starting to build around prospect Filip Zadina after his two-goal game at AHL Grand Rapids.

28 goals scored. -17 goal differential. The good defense that was masking the poor offense in years past is no more. Neither is the current Kings corp. Someone had to take the fall. That man for now was John Stevens.

The three power play goals in last Friday’s win were a long time coming. Now if Nick Bjugstad and the rest of the talented scorers can just start doing it more regularly…

Henrik Lundqvist is has a .923 save percentage, but he’s facing way too many shots per game to stop them all.

Goalie Jake Allen himself admitted the Blues have hit “rock bottom”. With strategy certainly in question, rumors of St. Louis being the potential landing spot for the now unemployed Joel Quenneville could be very real.

If you don’t believe the players aren’t happy with the coaching staff, check the tape from the Uber ride. Ottawa has allowed 59 goals through 14 games, a league-high.

Philly is tied for the second most goals allowed (56), and the goaltending remains a mess. Must be the powers of Gritty that allowed them to pull off a 3-0-1 road trip.

The problem for the defending Western Conference champions has been scoring. Their 33 goals scored is the second lowest mark in the league. As contributors like Max Pacioretty return, that figure should go up.

This young Coyotes team has a +8 differential, is playing exceptional defense, and just rattled off a five-game win streak. Progress is a great thing.

They aren’t as bad as their neighbors to the south in L.A., but the Ducks are tumbling as well. Their 25.3 shots on goal per game is worst in the league.

The return of Cory Schneider to the cage should provide a boost. The Devils will need to lower their 3.00 goals allowed per game average to be serious contenders.

The perplexing firing of three-time Cup winning coach Joel Quenneville comes amid a five-game skid. The problem wasn’t Quenneville, it’s the defense. The Blackhawks are tied for second to last in goals allowed, and are giving up 33.5 shots on goal per game.

The defense hasn’t been great, but the normally reliable Sergei Bobrovsky has been terrible in net. An .895 save percentage must improve.

The Sabres aren’t doing anything special other than getting full effort from a young but talented roster. The fact that it’s November and they have a winning record should be very encouraging to Buffalo fans.

After a fast start, the Hurricanes are in the midst of a four-game slide and are only scoring 1.78 goals per game over their last nine. Fans should hope the William Nylander trade rumors come true.

Jamie Benn. Tyler Seguin. Jason Spezza. The Stars have offensive talent all over the ice, yet are just 19th in the NHL with 41 goals scored. If the offense can match Ben Bishop’s strong play in net, Dallas could be for real.

The team has played much better around Connor McDavid recently. Given the relatively futile state of the Pacific Division, you figure the Oilers will have plenty of opportunities to win hockey games.

The defending champs are tied for third with 50 goals scored, yet their differential is only +1. Braden Holtby must cleanup the 3.62 goals allowed per game average.

The drop-off is still inevitable, but Vancouver is holding tough through the season’s first month. Not many teams can be second in their division with A -3 goal differential.

The Sharks are better than both their record and this ranking indicate and should only trend upward as the season progresses. They rank second in the league in shots on goal per game (37.8), yet somehow managed to lose to the Rangers twice.

The Penguins have been very streaky to start the year, and are currently on the losing end of their last four. The offense has been outstanding with Evgeni Malkin (20 points), Phil Kessel (16) and Sidney Crosby (14) leading the charge.

Carey Price has been outstanding and the Habs despite fairly average play around him. Will a defensive-minded approach be enough to keep Montreal in the mix with the Atlantic Division’s elite?

The Islanders made easily the biggest jump from the last rankings courtesy of their five-game winning streak. Their +11 goal differential is the fourth best in the league. They are headed in the right direction under Barry Trotz and could far exceed the relatively low expectations.

Calgary is currently on a four-game win streak and sit alone atop the Pacific Division. They rank sixth in goals per game (3.47), and Elias Lindholm has been spectacular with 17 points in 15 games.

The Avalanche are tied for the league lead in goals scored (52) and the offense remains as potent as ever. The key will be for goaltenders Semyon Varlamov and Philip Grubauer to be more consistent. Colorado has given up 13 goals over the course of their current three-game skid.

The Bruins defense is suffocating. They rank third in goals allowed (31) and second in goals allowed per game (2.21). The question is how much longer will Jaroslav Halak be playing over Tuuka Rask? The offense could stand to improve, as Boston has only scored 38 goals of their own.

The offense has been slow coming out of the gate, in particular Patrick Laine who only has 9 points to his name but will undoubtedly pick up steam. Winnipeg leads the NHL in minutes on the power play (210) and in penalty minutes differential (+55), so that could be a great place for the offense to start building more momentum.

Zach Parise has looked great and so have the Wild. Winning seven of their last eight games prompted the jump into the rankings top 5. Still, Minnesota can do better than their 40 goals scored, and their 33.4 shots on goal allowed per game.

The offense has slowed a bit and understandably so with Auston Matthews sidelined to injury. Expect John Tavares to pick up the pace with Matthews out. Now, if the Leafs could just start having better results at home. Toronto is just 3-5 on home ice and 6-0 on the road.

The Lightning rank fourth in shots on goal per game (34.6) and goals scored per game (3.50). Scary to think that some of the key offensive contributors aren’t even performing at their full potential yet. The defense has been terrific as well, to the tune of just 38 goals allowed. If not for three-goal loss to Nashville, they probably top this list.

The Predators have won three straight, lead the league in goal differential (+17), and in points. Pekka Rinne got to celebrate his birthday over the weekend with a new contract. And best of all, Nashville is once again atop the FlurrySports NHL Power Rankings. Music City hockey has never been better!