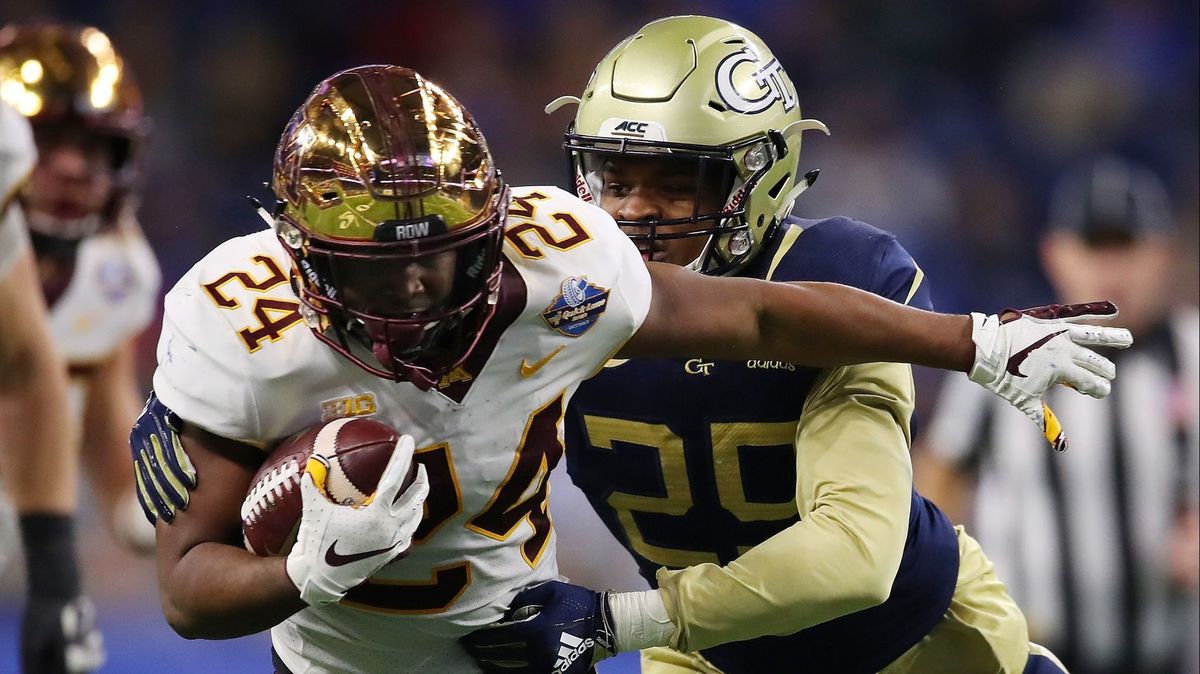 After a two-day Christmas break, Bowl Mania was back in action Wednesday. The first day of Power 5 conference participation had it all, including overtime in the desert, a ground and pound showdown in Motown, and a wacky first-time bowl occurrence.

The triple option offense was a staple of head coach Paul Johnson’s tenure at Georgia Tech, but it was the Minnesota ground attack that dominated the show in Wednesday’s Quick Lane Bowl. Mohamed Ibrahim finished with a massive stat line of 224 yards and 2 touchdowns as the Golden Gophers had no trouble with the Yellow Jackets in a 34-10 victory. The first bowl win of the P.J. Fleck’s “Row the Boat” era at Minnesota ended the Paul Johnson-era at Georgia Tech with a loss.

Ibrahim’s big day didn’t come from a lack of touches. The Golden Gophers fed him the ball 31 times over the course of the game, and the Georgia Tech defense simply had no answer. Quarterback Tanner Morgan only threw 13 passes, but he made the most of them, totaling 132 yards and 2 scores. Tyler Johnson was the recipient of both touchdown passes as part of his 4-catch, 57-yard day. Kicker Emmit Carpenter was also busy, converting 2 of 3 field goals and all 4 of his extra point tries.

Minnesota (7-6) never trailed in this one, jumping out to a 10-0 lead after the first quarter courtesy of a Carpenter field goal and a Morgan TD pass to Johnson. The teams traded field goals in the second quarter and the Golden Gophers took a 10-point lead into halftime. Ibrahim scored his first TD midway through the third quarter. After Georgia Tech (7-6) answered with a TD of their own, Ibrahim and Johnson each found pay dirt again in the fourth to put the game on ice.

TaQuon Marshall was essentially a one-man offensive unit for the Yellow Jackets who could never sustain a serious attack. Marshall finished with 76 yards passing and 75 rushing. Tobias Oliver piled up 69 rushing yards on 9 carries and Nathan Cottrell scored the team’s lone touchdown. Former Temple Owls coach Geoff Collins is set to take over in Atlanta next season following Johnson’s departure. There are bound to be growing pains as he implements a new offense.

With the strong defenses of both California (7-6) and TCU (7-6) going up against each team’s well-below-average offense, a low scoring game was expected in the Cheez-It Bowl. That expectation was met and then some as the two teams came up well short of the over/under line of 38.5. The two teams combined for 9 interceptions, prompting the “Cheez-INT Bowl” nickname on the game’s official Twitter account. It was none other than a Golden Bears interception on the first possession of overtime that set up Jonathan Song’s 27-yard field goal to give the Horned Frogs a 10-7 victory.

It was tough sledding on offense for both sides all night long. The only player to have over 100 yards in any single category was TCU running back Sewo Olonilua who paced the Frogs with 194 rushing yards on 32 carries. His 1-yard touchdown run late in the third quarter drew TCU even, answering a first quarter TD scamper by Cal quarterback Chase Garbers. Garbers wasn’t even around at the end of the game as he was benched after throwing 3 picks. After TCU missed a potential game-winning field goal try at the end of regulation, Cal started the first overtime on offense. Chase Forrest was intercepted by Jawuan Johnson who returned it 84 yards the other direction. A sideline interference penalty on the return forced TCU to work back into field goal range for Song to hit the winner.

The two California QBs combined to throw 5 picks in the game. TCU quarterback Grayson Muehlstein was no better, tossing 4 picks of his own. The two teams failed to eclipse 200 passing yards combined. On the bright side, both teams’ offenses are quite young and will hopefully be able to make strides next season.

The first ever SERVPRO First Responder Bowl between Boston College (7-5) and Boise State (10-3) made bowl history in the most unlikely of ways. Things started out according to script Wednesday at the Cotton Bowl. Eagles running back AJ Dillon scored on a 19-yard touchdown run to stake BC to a 7-0 lead. But just before the game turned 10 minutes old, a weather delay was called due to lightning in the area. The delay lasted for 90 minutes before the decision was made to cancel the game entirely with severe weather still in the area.

This is the first bowl game to ever be canceled completely due to weather. The only other College Football postseason cancellation that comes close in cause occurred in 1941 when Hawaii and San Jose St. did not play as planned due to the Pearl Harbor attacks. Both Boston College and Boise State said that they would offer refunds for tickets purchased through the school’s athletic departments.