War Eagle Travels to the Land of the 12th Man 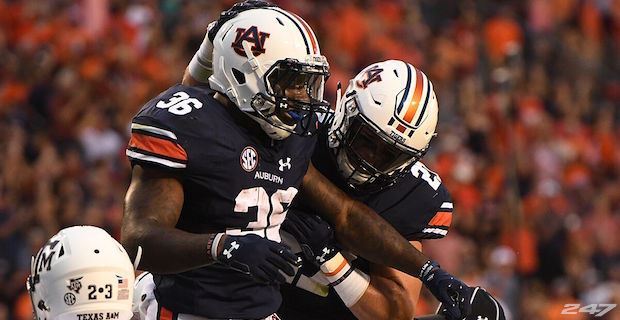 Coming off a much needed bye week, Auburn begins its November slate, as the Tigers travel to College Station to face an Texas A&M team that remains an enigma.

Texas A&M has not been good at home versus the SEC in the last three years.  The visitor in this series is a perfect 5-o.  The Aggies have struggled in the second half of their seasons, recently, and that trend may continue.  A&M was taken to the wood shed last Saturday night by Mississippi State in a game where the Aggies offense completely struggled.

Auburn enters the game off a bye week.  Gus Malzahn took the week to do some self scouting, while allowing some of the walking wounded to heal up.  It appears the latter paid off, as Auburn will enter the game fully healthy outside of Kam Pettway who suffered a fractured shoulder blade against Arkansas.  The Tigers were dealing with injuries in the offensive line and the back row.

Kellen Mond appeared to take a step back last weekend.  Mississippi State did a great job of taking away Christian Kirk.  The Aggies offense struggled as a result.  In fact, Mond was replaced by Nick Starkel.  It was the red shirt freshman’s first action since being injured in the season opener.  The change to the bullpen couldn’t get the A&M offense into any type of rhythm.  Which quarterback starts is a mystery, but it shouldn’t be a major deal from Auburn’s perspective.

Dan Mullen did a great job of keeping A&M off balance all night. The Bulldogs ran the ball well enough to keep the Aggies pass rush at bay.  Nick Fitzgerald had solid evening.  Auburn is better offensively than the Bulldogs.  The Tigers can stress the pass defense of Texas A&M better that Mississippi State did and they found success.

Rested, healthy and hungry, Auburn enters a critical stretch of their schedule.  Auburn begins a four game gauntlet that concludes with the Iron Bowl.  Everything is still in front of this group and the first step starts this weekend.  I like where the Tigers are at.  Simply take care of business this weekend and get back to Jordan Hare for some serious home cooking.

I firmly believe Auburn is the better team, but that has been an issue, at times, during Gus Malzahn’s tenure.  I look for a big game out of Jarrett Stidham with perhaps some new wrinkles sprinkled in.  The Tiger defense is very good.  Travel a quality defense, get solid quarterback play, and you have a recipe for success on the road.  I don’t think Texas A&M will be as bad as they were last week.  Auburn has had an extra week of prep and they appear as healthy as they have been at any time all year.  The Tigers are too deep up front and will give Mond and/or Starkel issues all day.