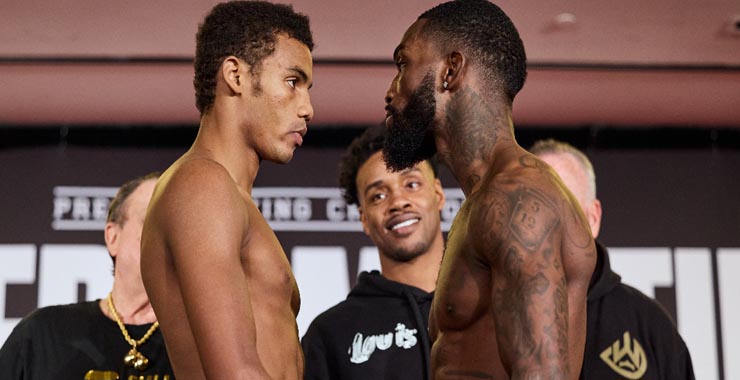 The final major U.S. boxing broadcast is just around the corner as Michel Rivera headlines the PPV along with Frank Martin on Saturday, December 17 at Cosmopolitan of Las Vegas. Both lightweights are undefeated and will look to leave an impact at the close of the year. Rivera is tipped as a more talented fighter and to get his hand raised after the final bell if it goes to distance.

The Miami-based Dominican is known for his swift foot movement and superior striking expertise. He is coming off a one-sided eight-round decision over Jerry Perez in October. While his opponent on the night, Martin is also no easy pie as the 27-year-old has been undefeated in his career so far. In his last fight, he punched his way out of the ring with a last-round knockout of Jackson Marinez at Alamodome, San Antonio.

A good company surrounds Martin as he trains under the guardianship of the welterweight champ, Errol Spence Jr., and the IBF middleweight Jermell Charlo.

But on the night, the fighter who keeps his cool will only prevail as both fighters are equally matched in skills and experience. Here is all you need to know about the Michel Rivera vs. Frank Martin PPV including the whole fight card and live stream sources.

How to watch Michel Rivera vs. Frank Martin live online?

The preliminary card of Rivera vs Martin will be streamed free on YouTube and Facebook Showtime. But if you want to watch the main card, you will need to purchase the PPV through Showtime. The televised card, which includes three fights, will begin at 10 p.m. ET on Oolatv From Anywhere.

The Michel Rivera vs. Frank Martin PPV will be live from Cosmopolitan of Las Vegas on Saturday, December 17. The prelims will be aired on Facebook at 8 pm ET with the main card beginning at 10 pm ET. The timings are subject to change depending on the length of the prelims.

The Miami-based Dominican, Michel Rivera will enter the fight as a slight favorite while Martin will have to contend with underdog status.