Iron Bowl 2017, the Game Within the Game 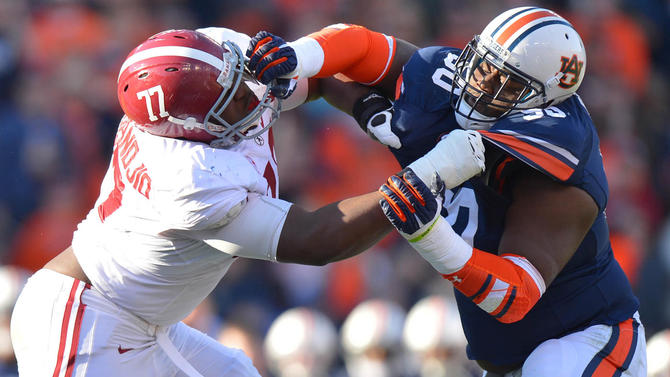 The Tide enter the game as an early four-point favorite in Las Vegas.  Since the game moved from Birmingham, Auburn has an 8-5 record in Jordan-Hare Stadium.  As a home dog, Gus Malzahn has performed very well.

As I break down this game down, Alabama has injuries on the defensive side, particularly in the front seven, that has taken its toll.  I don’t care how many so called four and five stars that the experts say you have, there isn’t a unit that can survive that attrition.  With the type of offense Auburn employs, it will be of vast importance that communication and alignment be on point.

Offensively, the Tide can present issues.  Jalen Hurts has improved drastically in year two.  Hurts is the catalyst to Nick Saban’s offense.  The combination of Bo Scarbrough and Damien Harris provide great balance in the run game, while Calvin Ridley can strike big plays in the passing game.

With that, Alabama hasn’t seen the elite talent that Auburn has in its front four.  Not only is Auburn talented, the Tigers have the depth needed to match Alabama’s offensive line.

The aggressive approach that Auburn has employed offensively has enabled the Tigers to be very efficient in the run and pass game.  Gus Malzahn has found the balance he was looking for in the beginning of the year.  Darius Slayton and Ryan Davis gives Auburn the ability to stretch teams vertically.  Slayton has been fantastic the last two weeks, and Kerryon Johnson has been outstanding running behind a much improved offensive line.

If there is one phase that Alabama could have a definitive advantage, its special teams.  Auburn has had issues in the punt game, and the Tigers kick and punt coverage has been spotty all year.  In a game that will be tight, big plays on special teams could tip the game in favor either way.  I do believe that Daniel Carlson is the better kicker in the game, and it very well could come down to a field goal.

Auburn must find a way to move the ball on the ground.  If they can’t, can the Auburn wide receivers find success against a solid back row of the Tide?  Minkah Fitzpatrick has been nursing a hamstring injury, but is expected to play.  How much will that play a role?

Mississippi State gave Alabama fits two weeks ago.  Granted, Jarrett Stidham doesn’t run the ball nearly as well as Nick Fitzgerald, but the Bulldogs don’t have the talent at running back that Auburn does.  To that point, Auburn must find unique ways to run the ball.  Can Eli Stove gets things going with the fly sweep?  Will the misdirection of the Auburn offense give the young line backers of the Tide issues?

On the flip side, can Alabama find running room against Auburn?  If not, will Jalen Hurts have the time to throw the ball against a ferocious pass rush?  Many questions to be answered for sure.

I see this game being very tight.  It will be won in the fourth quarter.  I don’t believe either team will be able to run it consistently.  It then comes down to quarterback play and which team will make plays in the pass game.

Why do I have the feeling that this game could come down to which kicker makes the money field goal?  Just a hunch, but that is how I feel.  Given that, I know who I trust more.