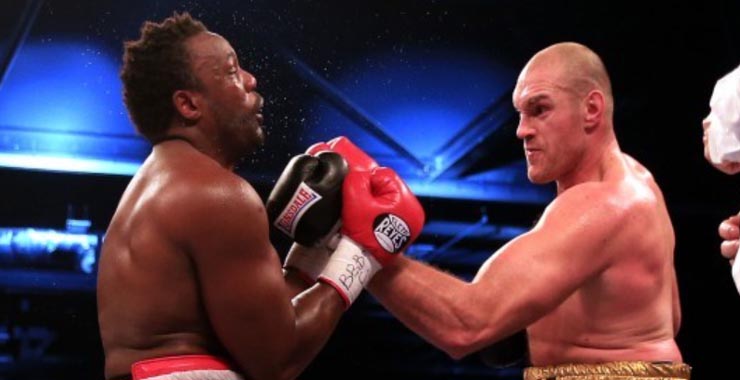 The WBC heavyweight champion, Tyson Fury will be back in action against his domestic rival, Derek Chisora this Saturday, November 3rd at Tottenham Hotspur Stadium, Tottenham. The Gypsy King had announced farewell from the ring after stopping Dillian Whyte back in April. But the change of mind resulted in him taking his retirement back and is now set for another outing in the ring against his former foe.

Fury and the ‘Del Boy’ Chisora have already met twice in the ring and on both occasions, the Gypsy King muscled his way past the veteran Brit. It is expected to go the same way as many boxing fanatics believe that Fury will prove too much for Chisora again. But in boxing, anything can happen as Chisora has definitely got the power in his hands to spring up an upset.

Chisora is coming off a split-decision victory over Kubrat Pulev in July, avenging his loss to the exact figure that occurred in 2011. The Del Boy was on his way to bowing out of the ring but a hefty offer resulted in him glove up once more. It took something special from Chisora to break a three-fight losing streak as the Finchley native bullied his way past Pulev in a thrilling encounter. Chisora is also determined to bring on the same energy against Fury, but it will be an uphill task for the 38-year-old to register a win over the 6ft7’, Gypsy King.

For Fury, it’s another big money fight in his hands as he will be there to provide his fans another moment to cherish. Here is all you need to know about the Fury vs Chisora trilogy fight.

The Fury vs Chisora trilogy PPV can be viewed live in the U.S. on ESPN+. It will cost $19.99/month subscription to get access to the whole card on ESPN. Purchasing the fight, you are able to watch it live online via the OolaTV (17.99).

While the fans in the U.K will need to move to BT Sport Box Office. BT sport will telecast the whole fight card across Britain. The fight fans will also be able to stream events on their mobile devices using the BT Sports app. The price is adjudged at £26.95 for Fury vs Chisora PPV. Tyson Fury vs Derek Chisora Live In Canadian PPV providers It’s available on OolaTV

The Tottenham Hotspur Stadium will be hosting a non-footballing event for the first time since becoming the official home of the English football club, Tottenham Hotspur in 2019. The 66,000-capacity crowd is expected to witness this all-British classic between Fury and Chisora on December 3rd. The event will start at around 12 p.m. ET | 5 p.m. GMT | 4 a.m. AEDT with the main event taking the walk to the ring around 4:30 p.m. ET | 9:30 p.m. GMT | 8:30 a.m. AEDT.