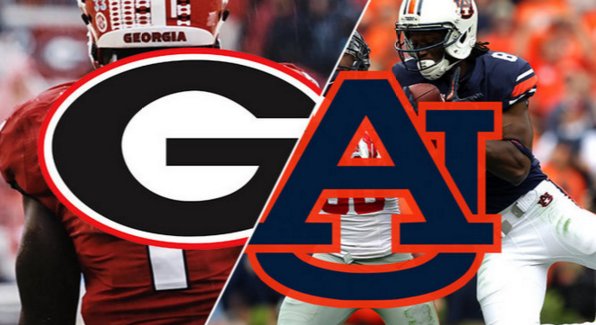 Jordan Hare Stadium will take center as the Auburn Tigers will host the Georgia Bulldogs.  This Georgia-Auburn game will mark first time since 2004, and fourth time ever (’71 and ’83), that both enter the game ranked in the top-10 of AP 25 poll.

Georgia possibly has the biggest win of the college football season, beating Notre Dame on the road. It was a huge win for Kirby Smart and the program.  The Bulldogs have already clinched the SEC East and are headed to the SEC Championship game.  Will they get there 12-0?  That question remains to be answered, but the ‘Dawgs could take a major step in that direction Saturday afternoon.

Meanwhile, Auburn can throw a wrench into the entire football season by taking down Georgia and Alabama in a few weeks.  There’s also a chance that this could be the second time that Auburn and Georgia will play if Auburn can run the slate.  If that is the case, we are in for a helluva stretch in the SEC.

This game will come down to the play of the Auburn offensive line.  I alluded to Georgia’s win over Notre Dame earlier.  The Irish struggled to move the ball on the ground against a very good Bulldogs defense.  Notre Dame wasn’t consistent enough with its passing game to overcome their struggles on the ground.

With that, Georgia will see the best quarterback they have played against all year.  Jarrett Stidham has played very well outside of the Clemson game and a portion of the LSU game, where the pass rush of both teams kicked in.  If the Auburn offense can get the ball out quick and run it enough, they will have success.  Stidham was recruited to Auburn for games like this.

Behind two NFL-caliber running backs and an offensive line that is much better than Kirby Smart initially thought entering the season, Georgia runs the ball very well.  Jake Fromm has done enough in the passing game to make the Bulldogs offense very efficient.  With that, Auburn has the depth and talent in the d-line, to give Fromm serious issues in the passing game.

Which team can run it enough and make plays when it counts?  Auburn has been very aggressive, offensively, since the LSU game.  The Tigers wide receiver corps has improved immensely during the season.  Georgia has run the ball over and through its opponents during the ‘Dawgs win streak.

Both teams are very good and the belief is here that both can defeat Alabama.  What remains to be seen is if Gus Malzahn get over the top against a top-10 team.  It’s been a struggle of late in that regard.

The Jordan Hare crowd will be alive and rocking.  Both teams will make plays. This edition of the South’s oldest rivalry is going to be fantastic. For every college football fan, whether you follow either team of not, this is what you live for.  I’m jacked up already and l will soak it all in.  Grab the cold beer, make your favorite appetizer and crank it up, this is going to be good.