The New York Football Giants have an Eli Manning-sized problem on their hands. The quarterback who has won them two Super Bowls is now holding back the Giants.

The point at which the whole world was exposed to just how bad things had gotten in New York was the Giants’ Thursday night game at home against the Philadelphia Eagles. The spotlight was on Eli and company to perform, and let’s just say things did not go great.

Against Carson Wentz and the Eagles, Manning went 24-43 for 281 yards, 0 touchdownss and 1 interception. Eli’s performance was abysmal in the team’s 34-13 loss. The only bright spot for the Giants was first-round pick Saquon Barkley, who had 130 rushing yards, 99 receiving yards, and the team’s only touchdown of the night.

Saquon flashed shades of Barry Sanders, as he evaded tackles and gave Giants fans something to cheer for. But back to Eli.

Behind closed doors, Giants players are not happy with the play of number 10. Reports have come out that several players have expressed frustration with the play of Manning, and one even went so far as to detail Manning’s struggles with cover 2 and zone defenses. Add that on top of Odell Beckham Jr.’s interview, where he said he wants Eli to air the ball out more and give him more opportunities to succeed, and you have a full-blown crisis.

Where to Place Blame?

I want to be fair to Eli. This is a man who has beaten Tom Brady twice in the Super Bowl, something no other quarterback can claim. He has had a very long and successful career, however a good portion of the blame needs to fall on him. He is surrounded by some of the best offensive skill position players in the NFL. Odell Beckham Jr. is an elite wide receiver, capable of making circus catches look routine. Saquon Barkley has the second-most rushing yards in the entire league and can turn nine-yard runs into must-see TV.

Sterling Shepard is a very capable second receiver, who can throw a mean block. You get the point. With that much talent around him, Eli Manning should be having much more success than his 1-5 record indicates.

In that game against the Eagles, Manning threw basically all check-down passes that were clustered around the line of scrimmage.

Also of note here is Eli’s time-to-throw chart. He was just 3-15 on passes where he dropped back for 2.51 seconds or more. But his second half pass chart is ridiculous. The Giants were losing 24-6 at halftime. That is the time to come out throwing and test the beatable Eagles secondary down the field with one of the best wide receivers in the NFL Odell Beckham Jr. 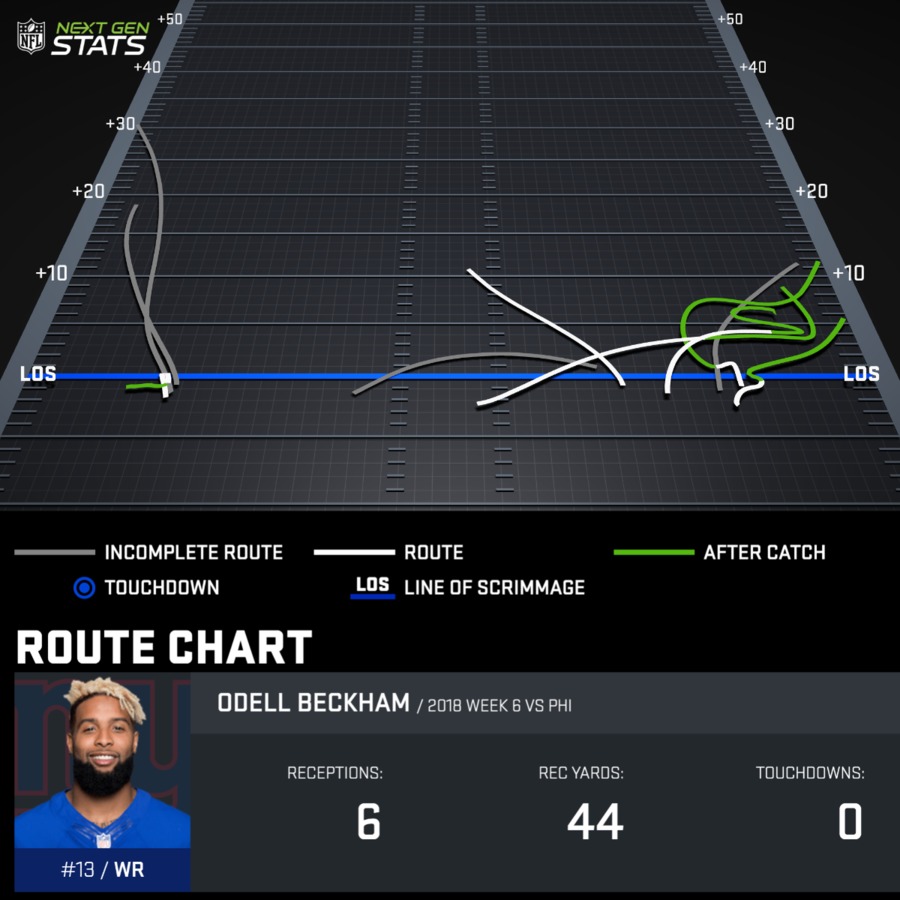 But as this chart from NFL Next Gen Stats shows, Odell ran just 2 deep routes, neither of which amounted to anything. That collection of short routes on the right side of the field is what Odell was talking about when he said he wishes he could do more than slant patterns. Inexcusable.

An examination of Eli’s passing stats for the year reveals several things about the 37-year-old. His 68.7% completion percentage is good enough for seventh in the league. However, Manning is getting just 7.2 yards gained per pass attempt. That means a lot of short passes, my apologies to Odell Beckham. Eli is also 24th in touchdowns, with six, and tied for 15th in the league with four picks–Not exactly lighting the world on fire.

Critics of Eli will point out that his stats have been on the decline for years. Even former Giants starting quarterback for a game Geno Smith weighed in on the Eli drama.

Quite the statement from a man who got his jaw broken over $600. I think what Geno was trying to get at there was former coach Ben McAdoo had a point by benching Eli when the team was 2-9. If you want to go further back, Eli’s 88 interceptions since 2013 are the most in the league. So needless to say, Eli is a big problem. However there are a few other factors leading to the Giants demise.

The Giants offensive line has to take some blame here. They were ranked by Pro Football Focus as the 24th-best in the NFL after week 5. Eli has been sacked 20 times this year, the most compared to any other quarterback. And those 20 sacks have resulted in 154 yards lost, which is, you guessed it, the most in the NFL. Maybe Eli only throws check-downs because he knows if he sits back in the pocket for any longer that he will be violently thrown to the turf by 300-pound men. Puts a little perspective on this, doesn’t it? And at 37 years old, Eli isn’t the most mobile quarterback. Wherever he goes when he drops back is pretty much going to be the only place he’ll end up.

The final place for blame is the Giants defense. Plenty of teams can win with sub-par quarterback play. Heck, Eli’s brother Peyton was basically carried to a Super Bowl win by the Broncos defense despite having 9:17 TD to INT ratio that season. It can be done. That doesn’t mean the Giants will follow that route, however.

The Giants defense is allowing 27 points per game, which is 25th in the league. Compare that to the Giants offense, which is only producing 19.5 points per game. You don’t need to have gone to Harvard like Ryan Fitzpatrick to know that you won’t win a lot of games that way. For a team who spent so much on their defense by bringing in guys like Olivier Vernon and Janoris Jenkins, allowing that many points per game is crazy. The Giants defense is also last in the league with just seven sacks. Tell me there isn’t a problem here.

That is the million dollar question. The Giants options behind Eli Manning are backup Alex Tanney and rookie Kyle Lauletta. Tanney is 30-years old and has played in one game, in 2015 with the Titans, since entering the league in 2012. Lauletta is inactive on game days, being a third stringer, and had an up-and-down preseason. This means that Eli, barring injury, will be the starter for rest of the season in my opinion. There have been calls for Kyle Lauletta to come in, however I believe head coach Pat Shurmur will stick with Eli.

The conversation then shifts to 2019. Eli is under contract through the end of next season, but if he continues on this pace, the Giants will be forced to search elsewhere for next year’s quarterback. This is all very sad to think about given how much Eli has meant to the Giants. But, just like Peyton, you can tell when your time is up. Eli should be celebrated for all his accomplishments and given a proper send off instead of being ripped to shreds by teammates and the media. If nothing else he should be celebrated for giving the internet many great years of “The Eli Manning Face.”

Not even the end of the first quarter and we already got the Eli Manning face pic.twitter.com/g4dhMdHzcA

Vontaze Burfict Should Be Banned From the NFL ASAP
NFL Power Rankings: Week 7